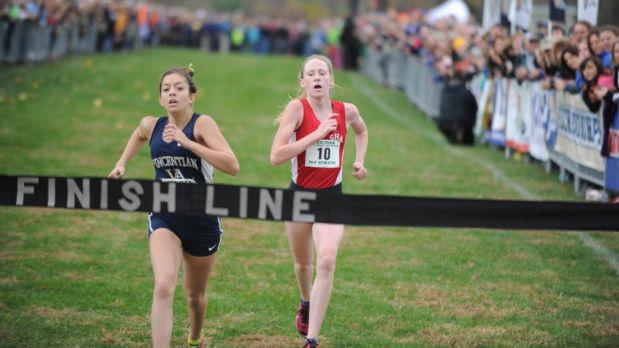 As cross country runners start to ramp up the summer mileage, it seems like a great time to look back on the past school year at some of the great moments of the 2015/2016 season from the cross country season of last fall to the indoor season and all the way through outdoor track. We present the list of the top 20 moments of the year that was! Today we start off the list with number 20!

Three years ago a freshman emerged onto the scene and detrhoned the champion from the previous season. Fst forward to today and there's been one constant since then: Marianne Abdalah at the top of the Class-A podium. The Vincentian Academy harrier finished off her third consecutive Class-A cross country individual title in the fall.

But after running away with state titles in her freshman and sophomore year, 2015 was a different story. She had Sacred Heart's Emma Seifried on her shoulder the entire race, offering more than a formidable challenge to the three-peat. However, in an epic duel to the finish, Abdalah's experience paid off and the junior took the win at the line in a time of 18:50 to win XC state championship #3. Watch the race highlights above.

What's next for Abdalah? How about a four-peat? The rising senior has displayed the form to do so after a big spring season and a rematch with Seifried and a host of other contenders will certainly await her in Hershey in November. Abdalah expects a tight race again.

"I know next year as a senior, everyone is going to want to beat me," she said after states.

Watch Abdalah's post-race interview from the state meet below:

Keep it locked on PennTrackXC throughout the month of the July as we continue to countdown the top moments of the year. View the whole series HERE!