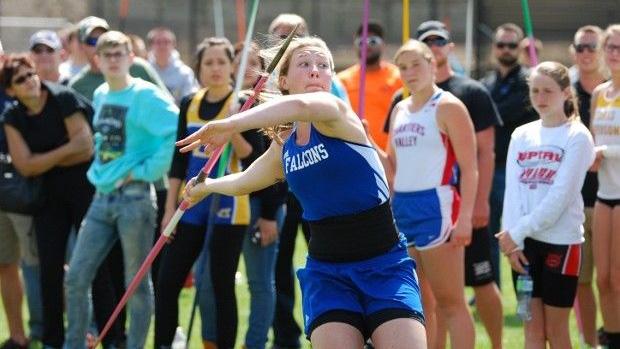 Long before she was a state champion or national record holder, Madison Wiltrout fell in love with the University of North Carolina at Chapel Hill.

The Connellsville senior didn't forget that special place when it came time to choose her academic and athletic home for the next four years, deciding Tuesday evening to verbally commit to the Tar Heels.

"For me, it's always been a dream to go to a place that's known all around as prestigious," said Wiltrout, who on May 7, 2015, at Norwin set the national record in the javelin at 185 feet, 8 inches. "I visited North Carolina unofficially in eighth-grade on the way to the beach. We passed through, I walked on campus and I fell in love with it.

"UNC. UNC. I had all the attire. When I went for my official, it was nothing less. The atmosphere of it is laid-back, happy and Southern. I loved it there."

This summer, Wiltrout took official visits to LSU, Georgia and North Carolina, with six schools offering full scholarships out of 13 or 14 serious suitors, the senior said. Wiltrout said interest from colleges grew after her state title and elbow injury at Shippensburg in 2015.

"The ones that still pursued me didn't care (about the injury)," she said. "They had true faith in me."

Wiltrout, who owns three meets over 180 feet and shattered the old national record by more than 4 feet, injured her right elbow in claiming her second state title. After surgery and extensive rehabilitation, Wiltrout stayed undefeated at Shippensburg in 2016 with a winning throw of 164-1, which was US#3 last season.

"My arm is really back to better than before, I know it is," Wiltrout said, adding that she has completed the physical therapy on her throwing arm. "I am stronger overall, mentally and physically. I am ready for this track season."

In addition to bringing an end to her 2015 season, the elbow injury on a windy day at Shippensburg made Wiltrout a spectator rather than a participant in a variety of activities. She plans to rectify that this winter as she will suit up for the Falcon basketball team.

"I am going to do basketball this season," declared Wiltrout, who hopes to be accepted into UNC's Kenan-Flagler Business School after completing her general course requirements. "It's always been a love of mine. That's not a fear of mine. I'm excited for that.

Watch an interview with Wiltrout after winning the AAA javelin at the PIAA State Championships this past spring: