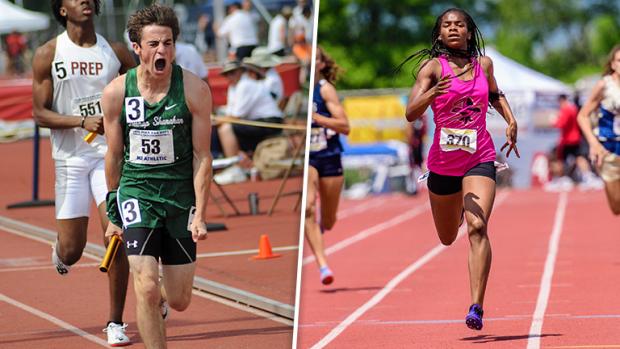 Through the heat, Pennsylvania came away with another state meet for the ages. The PIAA State Championships brought plenty of meet record and excitement.

Stay tuned for more in-depth coverage throughout the week, but for now, here's a look at the headlines that dominated the week, along with other coverage links.

We break down the rest of the Saturday action...

Neumann Goretti is leaving Shippensburg will plenty of gold around their necks. The Saints, particularly on the girls' side cleaned up at the state meet in AA.

It was another legendary state meet for Ayden Owens. The North Allegheny senior capped off his PIAA career by sweeping the AAA hurdles once again. He went 13.69 (just off his PR) to break the meet record and win the 110-meter hurdles. Owens came back to win the 300-meter hurdles in 36.68. He added a second place finish in the long jump with a leap of 23-03.25.

Rick Zink etched his name into PIAA lore, winning an individual race and a relay in dramatic fashion. In the 400 meters, the Bishop Shanahan sprinter, who entered his senior season as a relative unknown in the state, kicked past pre-race favorite Miles Green of Saint Joseph's Prep to take the win in the 400 meters. Zink clocked a 47.92. He then returned on Shanahan's 4x400-meter relay to provide an anchor leg that featured another big kick past Green and the Prep squad. That Shanahan team also included Josh Hoey, the nation's top 800 meter runner.

When the dust settled, the teams were deadlocked at 32 points, meaning they'll share the AAA team title.

For a second straight season, Hunter Robinson earned two individual wins at the state meet. Only she traded the 100 for the 400 this season. Robinson ran 54.10, a nice PR, to win the 400 meters. She was second a year ago in the 400 to Uche Nwogwugwu. Robinson then returned to drop a 23.98 to repeat as 200 meter state champion.

Avonworth/Northgate also scored points in the 100 meters, thanks to Hayden Robinson (second place), and both the A/N 4x100 and 4x400 medaling. They totaled 38 points, enough for the AAA team title, four points ahead of second place State College Area.

Joe Jardine was happy to get back on the top of the podium after a year absence. So for good measure, he did it three times: twice individually and once with his team.

Jardine started his weekend with a AA long jump title. He jumped 23-00.25 to win the event on Friday. Then in the final event of the states weekend, Jardine took first in the AA pole vault, clearing 16-03, a new PR and PIAA meet record. Jardine was the pole vault state champ as a sophomore, but took second a year ago. 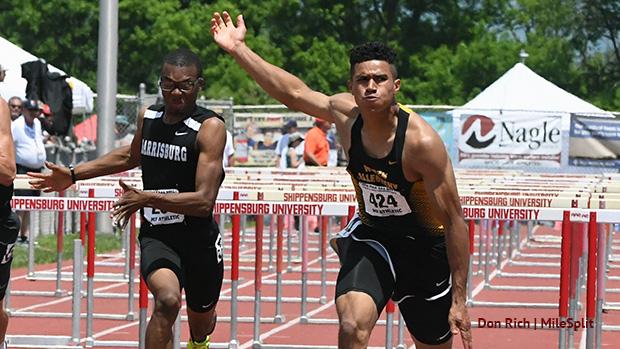 It was deja vu for fans in the stands at Shippensburg, which saw the same winners in the 100 meters and the 200 meters in the AA girls and boys races, as well as the AAA boys.

Thelma Davies of Girard College completed this double for the third time in as many years. She went 11.82 to win the 100 meters and then returned to capture the 200 meter state crown in 24.02.

In AA boys, we got a different champion for the first time in four years in the 100 meters. Austin Kratz of Dock Mennonite kept his superb season rolling, winning the 100 meters in 10.57. He then returned to take the 200 meters later in the day in 21.30 (he ran a meet record 21.27 in the semis).

Both Kratz and Saunders provided legs on winning 4x100-meter relay teams. The Dock boys won the AA race in 41.75 and Truman captured the AAA race in 41.57.

A pair of Distance Triple Crowns

Starliper won the AAA 3,200 meters in 10:25.28, just off the PIAA meet record. Earlier in her sophomore season, she won the AA XC state crown and at indoor states captured the win in the 3,000 meters (as well as the mile). She returned in the 1,600 meters to place third.

Kujdych closed out his senior campaign with another state win. He ran 9:04.98 to win the AAA 3,200 meters. In the fall, he won the AAA XC state title and in the winter, he won the 3K at PTFCA Indoor States. 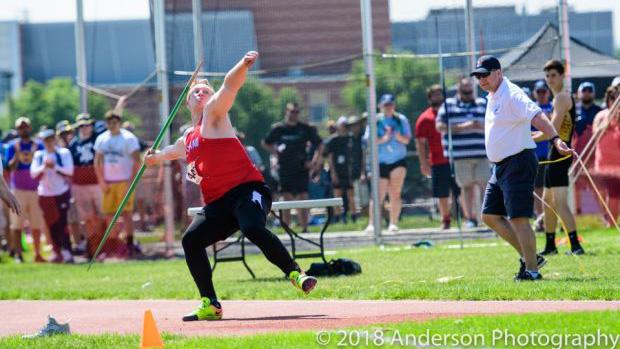 It was another big weekend for the javelin throw in Pennsylvania.

On Friday, Kane Area's Trinity Clark closed out a strong senior season with a win in the AA girls' javelin. She threw 146-09 for the victory. She remains at US#3. In AAA, US#2 Skylar Ciccolini of Mifflin County won the compeittion with a throw of 167-04, continuing her consistent junior season. She is at US#2 from a throw earlier this spring.

Central Bucks West had quite the Saturday morning, picking up 4x800-meter wins in both the girls' and boys' AAA races.

It started with the girls from CB West. In a dramatic race, West took the win in the closing meters when the Butler anchor leg fell with the lead and win seemingly in hand. West's anchor leg Vanessa Barrow ran past her for the win in 9:13.71, the second fastest time in the state this season.

In the boys' race, West was in control for most of the race. The defending champions saw a challenge from Ephrata and Pennridge on the anchor leg, but Jake Claricurzio held on to keep West's reign on the AAA team title. West clocked a 7:42.95, a PA#1 and US#2.

Many at Seth Grove Stadium may not have been all that familiar with the name Melissa Riggins before this past weekend's state meet. But the freshman from Shady Side Academy surely left her mark before she left.

Speaking of freshman winners, Tia Taylor of Saint Basil Academy, was another ninth grade state champion. Taylor went 14.48 in the finals of the 100-meter hurdles to edge out Skyla Wilson and Townsend in a race that saw the defending champion Brenna Cavanaugh of Bentworth stumble on the final hurdle.

Warren wins on the field and on the track

Christina Warren of Perkiomen Valley showed off her versatility once again at the state level. The junior captured state titles in both the triple jump and 100-meter hurdles in AAA.

Warren jumped 40-11.25 in the finals to secure her second straight triple jump state crown on Friday. Then on Saturday, she dropped a PR of 13.72 to win the high hurdles. She was the indoor state champ in the triple jump and 60-meter hurdles, too.