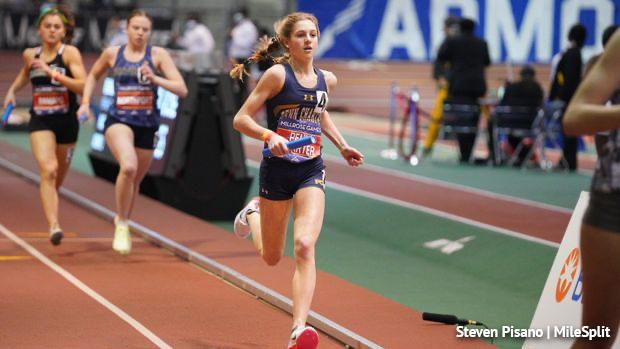 Presenting our newest feature: The Future Stars Series. In this series, we'll take a look at one freshman or sophomore that is making a big impact early in their career, and is showing that they are a star in the making in Pennsylvania track and field.

DeLisi is off to a hot start in her high school career, and on the heels of a great cross country season in the fall, she has followed that up with some fast times on the track. She is proving to not only be one of the state's top freshmen middle distance runners, but one of PA's brightest middle distance stars right now, period.

But let's start with her XC season. DeLisi ran a best of 18:44 for 5K and finished no worse than fifth in every race she contested this past season. She won the inter-Ac League individual title at Belmont Plateau and followed that up with a second place finish at the PAISAA Championships, the state meet for independent schools. She also led her team to the PAISAA title. She has remained strong -- and arguably better -- on the track this winter. She is currently PA No. 2 in a pair of PTFCA-contested individual events. At the Marine Corps Holiday Classic, DeLisi ran 2:13.11 for 800 meters, which is currently PA No. 2 overall and the fastest freshmen time in the nation.

The same goes for her mile time. At the Hispanic Games, DeLisi ran 4:58.14, which is a PA No. 2 as well as a US No. 1 time for freshmen. Her 1,500m split from the Hispanic Games also ranks her PA No. 2 and puts her atop the freshmen national rankings.

At the Marine Corps Classic, DeLisi also also clocked a 58.68 for 400 meters, a time that is PA No. 6 overall and a US No. 4 time for freshmen. The speed and strength mix is certainly there!

DeLisi has also been a major asset on Penn Charter's relays. PC currently sits at PA No. 1 in the 4x800m relay and PA No. 2 in the DMR. DeLisi shined at the prestigious Millrose Games this past weekend, where Penn Charter clocked that state-leading 9:21.88 to place second. DeLisi gave a great anchor leg, clocking the fastest FAT split of the meet (by a second and a half) of 2:11.92 to take the Quakers from fourth to second.

It's been quite the freshman campaign for DeLisi, but she's proving early on her career that she's not slowing down any time soon.