Brendan Shearn has been on the radar since he was a freshman in 2009, capturing 2nd in the District 11 AA XC Championships. He won a local league title the following spring, and followed up a XC league title with his first of two District 11 AA XC championships. He medaled at XC states, and then finished out his sophomore year with two district titles, followed by a runner-up medal in the 1600 and an 8th place medal in the 3200 at the state meet. As a junior, he opened with his 2nd consecutive District 11 XC title, and then won his first state title at Hershey. He was 20th in the Foot Locker Northeast Regionals. His indoor campaign was no less successful as he was 4th in the 3000 at PTFCA Indoor States, and 8th at the New Balance Nationals indoor 5000 in a PR 15:06.23, and 5th in the Emerging Elite 2-mile. Shearn has had two outstanding races this spring, running a big PR in the 3200 at the huge Arcadia (CA) Invitational in 9:15.01, and three weeks later capturing 8th in the prestigious Penn Relays Carnival Invitational 3000 in 8:36.65. Oh… and he is the defending champion for PTXC-4 set for September 8th at Kutztown University.

In this post I get to share my experience at one of the most exciting races ever, the Penn Relays. Running in the Penn Relays has been a dream of mine since my freshman year when I watched Usain Bolt run there. After the Arcadia invitational I knew that I would have an excellent shot at racing this year. There was a little bit of a mix up with the seeds and I was not on the original list. My athletic director, Jim Gross however, managed to save the day by calling down and fixing the problem. When I found out I was running for sure I was overjoyed just to know that I made it in.


The morning of race we left early and arrived at Franklin Field at about 11:30. I was accompanied by my biggest supporters, my Mom, Dad, and girlfriend. We grabbed a bite to eat at a local sandwich shop and set up “base camp” in the lobby inside. “Base camp” is what my Mom refers to as the place to keep me out of the elements. So I ended up spending most of the day laying on a couch inside because it was so much colder then I anticipated. At around 3:00 we decided to head over to the meet to begin to get prepared. As we sat down I found some old friends from Altoona, Korey Replogle and Dylan Mountain, and we enjoyed watching some of the races that were going on. Before long it was time to get ready for my race, so I took the long walk over to the warm up field.


After hearing all of the stories about how you are crammed into little paddocks before your race I warmed up a lot more then I normally would. Oddly enough I met the same friend I saw out in Arcadia preparing for the DMR again. After that I ran into a lot of PA guys getting ready to run the DMR and Mile, and seeing all of them really made me excited to represent my state. I must have lost track of time warming up since I had to sprint over to the gate to get checked in. In the gate before we went into the stadium I had to listen to my pump up song on my phone because I left my ipod with my parents. Most of the runners probably thought I was pretty strange jamming out with a phone held up to my ear, but my superstitions must be obliged. 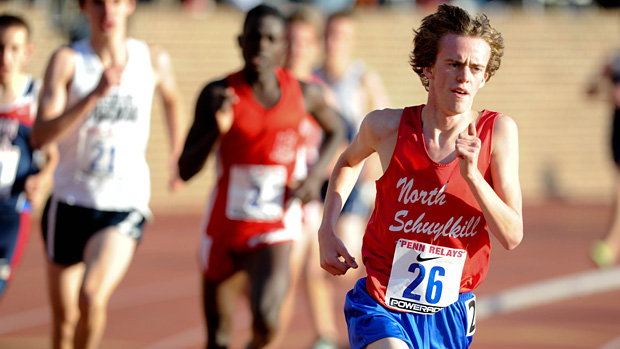 Before the race waiting in the paddock was one of the most nerve-racking experiences of my life. It was also one of the most comical as 20 some runners shuffle around trying to stay warm. After watching my boys from La Salle tear it up in the DMR, and Drew Magaha kick his way to a solid time in the mile, it was time for the 3k.


As the race started I managed to get one of my best starts ever (I am a notoriously slow starter). Around the first 200 meters I found myself right where I wanted to be in about 9th or 10th in the middle of the pack. Unfortunately after the first 200 meters things got bunched up as everyone fought for position. I ended in lane 3 fighting just to keep my feet.


At about 600m things started to ease up a little and I followed Dustin Wilson and Sam Hibbs as they moved up through the pack. Things had slowed considerably at this point and I honestly considered making a move to the front to pick things up. As soon as that thought crossed my mind a different runner, who I now know is Sam Parsons, made a move and started pushing. This is when things started to pick up a lot more and the field began to string out. The leaders hit the mile in about 4:35-4:36 and I hit it at about a 4:38. I had expected to be a little faster so from there I made a big surge to move up into about 7th or 8th. With about 1k to go I found myself very close to Dustin and I tried desperately to close the gap to him. Just when it seemed like I had made up a little ground he took off making a bid for the lead. With about 400 to go I felt completely drained, I was sprinting as hard as I could not to get passed. With 200 to go I didn’t think I had anything left, but Coach Boldon, the University of Pennsylvania coach, came running over cheering for me telling me to finish. I dug as deep as I could, but I was passed by two runners in the final meters of the race.


After the race I was very proud of myself and how I ran. The Penn Relays was an amazing experience and I am looking forward to going back next year. Congratulations to all of the runners who competed that weekend and good luck to everyone at Districts and States. 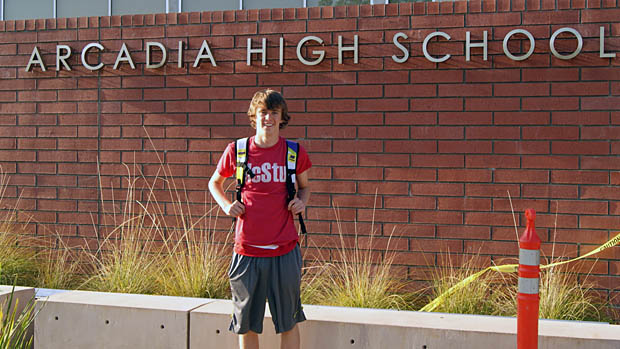 Hello everyone! My name is Brendan Shearn and I am a junior at North Schuylkill High School. I have had an awesome junior season so far and I am looking forward to keeping it going. I am a proud representative of the AA portion of the PIAA, and I was fortunate enough to attend the Arcadia Invitational this past April. MileSplit has asked me to share my experience there and I could not be more excited.

I flew out to California early that Thursday with my parents, and the flight took a lot more out of me then I expected. The climate in California is so much dryer than in Pennsylvania that the first night out there I felt absolutely terrible. After a day of catching up on lost sleep I managed to force myself to run at about 7:30 at night California time in an effort to get my body used to racing that late at night. I managed to struggle through 4 miles on a treadmill and I must admit it was probably the most difficult 4 miles of my life.

After an early nights sleep I spent most of Friday seeing the sights that Southern California had to offer. My parents and I walked all over Hollywood and saw things that I would never have gotten to see if it had not been for running. We stopped at Grauman's Chinese Theater, Kodak Theatre, and the Hollywood sign. It was an amazing experience to see a different side of America. After we had spent most of the day walking around Hollywood we decided that it would be a good idea to head over to the meet. We arrived just in time to see one of the few people I knew at this meet, Dan Galford of Monsignor Farrell, run the 4x8 with his team. The meet was unlike any meet I had ever seen. There were no tactics, in the races just people trying to run fast. Watching this made me excited for my own race the next day. I headed back to my hotel to try and get in another night run. This time I decided to head out and explore the town of Arcadia. I felt a little better than I had the night before and managed to get in an easy 3 miles. 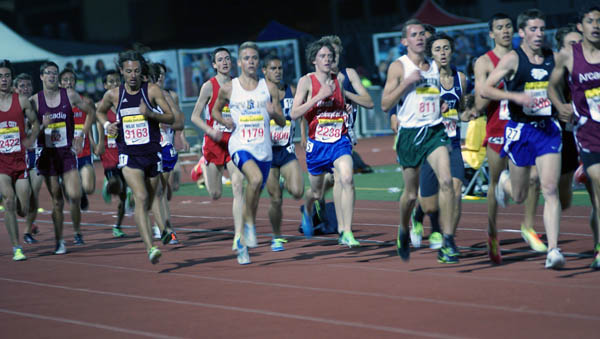 The day of the race dragged on more then I could have ever imagined. I decided to take it easy and my parents took me to the mall for a new pair of Vibram Five Fingers. I have to do this every few weeks because I wear holes right through them. After this I just relaxed until about 5:00 when I had to head over to the track. By this point I was in complete shock, doubting myself more then I ever had in the past. Ten thousand thoughts raced through my head as I watched other races. As I began to warm up, I thought I was going to be sick with nerves before the race even began. Just before my race started, I listened to my favorite song (A-punk by Vampire Weekend) to prepare myself. As the final beats of the song faded away I knew that I was ready.

This race was a once in a life time experience of which I tried to enjoy every second. I ran in the slow heat for the first time in my career as I had not run fast enough to make the fast heat. The race went out in a blistering pace as everyone fought for position. Everyone was jockeying for position, as I sprinted around a small pack to get to the inside rail. The race was a fight to maintain position as everyone kept pushing the pace. I came through the mile at about 4:36 which was about where I wanted to be at this point in the race. With 1k to go I remember trying to surge to catch back up to the leaders. As I came through with one lap to go I felt more drained then I ever had before in a race and I ran as hard as I possibly could to keep going. In the last 200 meters of the race I was passed by several runners which made me a little upset until I saw my time. I was ecstatic to see I had just run a 9:15 which was a large PR for me so early in the season. I am so grateful for all of the support I received from friends and family after the race and I am looking forward to keeping this success going throughout the spring track season.