In REAL meets that count, the slate is dead-even between US top 10 teams West Chester Henderson and Cardinal O'Hara.

Henderson was tops in a tie-breaker on November 3rd at the PIAA State Championships… and O'Hara was the  better of the two at the Nike Cross Nationals Northeast Regional on November 24th. (The two actually tied with O'Hara winning on an unofficial tie-breaker in a 3200 meter workout 11 days after the state meet.)

The rubber-match is next Saturday in Portland, Oregon at the 9th edition of the Nike Cross Nationals, where they will face many of the top teams in the country. 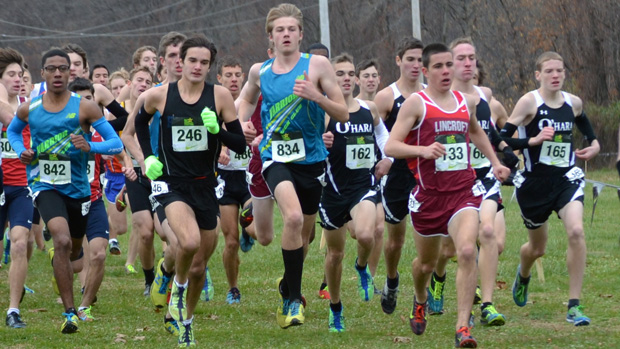 These two boys' teams are among the best in the history of the state. West Chester Henderson had a pretty good squad in 2006 that included Foot Locker finalist Chris Aldrich. But that was the year of the Men of Black from Coatesville who scored an astonishing 26 points to win the state title over the Warriors by 60 points. Coatesville would go on to win the Nike Cross National title on the first Saturday of December.

But two teams of this calibar in the same year?

But two teams with 69 points each is very rare. That's what happened this year.

Suffice it to say, they really are both that good and virtually dead-even. And that includes the mutual respect the athletes and the coaches have for each other.

The goal for the NXN Northeast Regional meet was simple. Try to stay as close to US#1 Christian Brothers Academy of New Jersey, and get one of the two automatic bids to nationals. The 3rd place team would hopefully be as close as possible and earn one of the four national at-large bids the following day.

The Bowdoin Park course at Wappingers Falls, NY is basically half uphill, and half downhill. In that order.

So position is important at the top.

At that point in the race it looked very good for PA, with Henderson in first with 73 points, O'Hara 2nd at 79, and CBA in an unusual position in 3rd with 103 points.

Obviously, that is not where it finished. CBA would take that 73 points and make it their's, while Cardinal O'Hara and Henderson would take 2nd and 3rd separated by just five points - 90-95.

As we know from watching the 3-time PIAA champion Pennsbury girls lose to Unionville by 15 at their 2012 district race, a point differential in the 17-22 range is not a lot at this level.

Strategy can make the difference on race day.

O'Hara coach Tom Kennedy said he went back and forth on the plan for the Bowdoin Park course… go out fast or lay back. The team had previewed the layout two weeks before with Don Bosco Prep. "They were preaching a lay-back approach" Kennedy says. "We decided to fire up the hill."

The strategy almost worked, because Kennedy says they had CBA on the ropes with 800 to go. "But they closed it out on us."

Following the fire-up-the hill advice was taken a bit too literally by O'Hara's 5th man, who found himself up with the leaders at the midway point. But he finished strong and contributed to O'Hara amazing 17-second spread of 1-5. It had been 41 seconds at the state meet. Kennedy was particularly happy with sophomore Kevin James, who ran 2nd for the team and 16th overall. "To be that young and race that well is incredible. He just doesn't seem bothered by the hoopla."

Kennedy also was especially impressed by Henderson #2 and regional runner-up Reiny Barchet. "That last 50 meters it looked like they had him. Gutsy is all I can say." 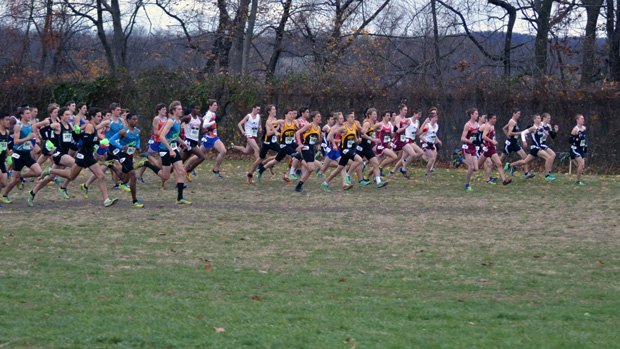 Henderson had a different challenge awaiting them for this race. Junior Sam Haugh, who was their 4th man at states and the guy who beat an O'Hara runner by literally an inch to secure the tie-breaker win - injured his hand between the state meet and the 3200 workout and is done for the season.

But Henderson is deep… and coach Kevin Kelly knew he had a 3-7 that had run 22 seconds apart at states to back up their amazing one-two of juniors Tony Russell and Barchet. So he asked sophomore Alex Knapp, who had run 4th for them at Carlisle - but who had generally been running 6th or 7th - to step it up.

If only coaching were this easy… but as we well know, it is anything but.

But step it up is what Knapp did.

From running 7th at the state meet, Knapp moved all the way up to 3rd on the team in 31st for 26 points. It was just 14 seconds from his finish to Henderson's #5 guy. "All the guys ran solid," Kelly says.

Both coaches are thrilled that both PA teams are making the trip. Kennedy says his guys wouldn't want it any other way.

"O'Hara looked good," said Kelly. "Both teams can be in the top five on Saturday."

Kennedy says they have yet to have their seven best races on the same day. "On the right day, we can really put it together. It will make it interesting."

After a tie-breaker and a five-point difference in two amazing races, this race is about much more than bragging rights in PA.