Wellington Zaza recent - Garnet Valley graduate - is a goal oriented person on and off the track.  He selects his goals and follows the plan set forth to achieve them.

Zaza had a goal going into the PIAA State Championships to break a  major record, but it didn't happen until weeks later at New Balance Outdoor Nationals in Greensboro NC. 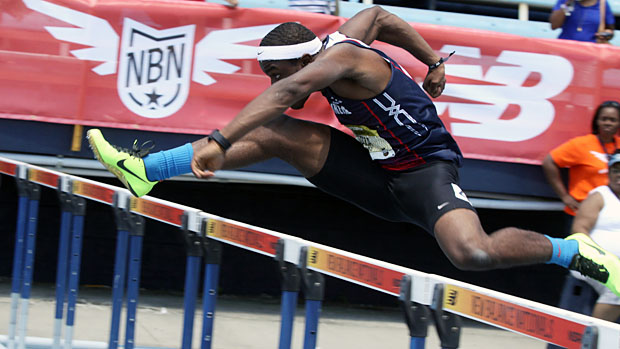 A PA state champion not only in the 110m hurdles, but also in the triple jump, he ran a time of 13.54 at NBON in the110m hurdles and broke a Pennsylvania state record that has stood since 1995  The record was set by Deworski Odom of Overbrook High School, who would go on to become a pro athlete in the event.

When asked about breaking the record, Zaza said "I knew I could do it".   He said he studied Odom from YouTube videos to try and understand what he did to run so fast.

In fact, Odom was there to cheer Zaza on at the PIAA state championships in May and he was there to shake Zaza's hand in June when he broke his record in NC.

When he met Deworski Odom at the PIAA State Championships in May,  Zaza threw out a challenge to Odom to see if he could still hurdle.  Zaza was surprised that Odom could still "get that trail leg down"  and admitted that" I didn't think he had it in him still".

There is no distracting Zaza when he is on the track. It's all business from the warm up to the competition. His whole focus is the competition.  He wants to be the best and knows what he has to do to accomplish that.

Some people can mistake Zaza's seriousness on the track as arrogance, but it's all part of the plan to reach the goal that he has set forth.  When he's on the track he's always ready to compete.   "On the Mondo, no matter what happens, I'm ready”.

When asked if he reached all the goals on the track that he set out to accomplish in high school, he stated that there were some that he didn't reach like breaking former Penn Wood star Eric Futch's record in the 300 hurdles.  He talked about the ‘not so ideal’ weather conditions at the PIAA State Championships, but in the same statement he said, "no excuses , I hate making excuses. "

Zaza’s training supports his goal to continually improve on the track.  He mentioned that his trainer and first coach, Coach Charles from Upper Darby, sends him a workout every day. Sometimes when he first looks at the workouts, he thinks twice about reading the message but then realizes that it's all part of the plan to get better. Sometimes he runs other events in meets like the 200m or the 800m as part of his training to build endurance.

Zaza also trains with other athletes, his friends from competition, some that he's been friends with for a very long time. He feels that everyone has something to teach him and he is very open to learning.  He is also very willing to pass on what he has learned.

Zaza thinks about getting better most of the time and track is pretty much his focus all the time as well.  He stated that he even does flips onto his bed before he goes to sleep at night.

If you watch closely as he walks, you’ll notice that he would start moving his arms like he was triple jumping.  It's obvious that he thinks about being on the track a lot.  And whether he's on or off the track, there's no stopping him from thinking about track. It's part of everything he does.

There's no denying that Wellington Zaza has confidence and he has the accomplishments to back up that confidence.  He has won league, district, state and national championship titles, both indoor and outdoor in 110m hurdles, the 300m hurdles and triple jump.   Check out his profile on PennTrackXC.

A lot of people know Zaza when they see him. At any venue, many athletes say hello to him and call him by name. They know who he is and they want to make a connection with him. One way that Zaza makes a lasting connection with other athletes is to trade track and field items, (bib numbers, t-shirts,etc.) anything that reminds him of the new connections that he has made with his fellow track athletes.   Zaza's thoughts on all the attention, "I like meeting people",  I like making new friends". 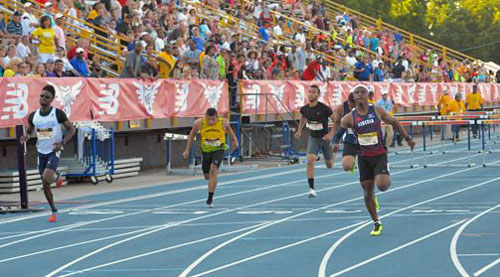 Born in Liberia, Zaza wore a Liberian jersey when he competed in Greensboro.  Asked about wearing the jersey at Nationals and also if he had worn it before, Zaza said, "It was important to wear it because it's a representation of where my family is from and hopefully compete in the 2016 Olympics for my country.  I haven't worn it in competition before, this would be my first time."

Interviewed just after July 4th, Zaza was asked what independence meant to him coming from Liberia.  He talked about how Liberian Independence day is celebrated by the best soccer players in the country coming together for a big game.   "It's a big deal to watch the game." He will be spending the day watching with family and friends.

Heading off to college at the University of Miami,  Zaza says he doesn't have any specific goal in mind yet.  He wants to talk with his coaches and see what they have planned for him.

Zaza says the team at the ‘U” is young and that he can grow with and create and early bond with them.

Grateful to all the people that have helped him during his high school years, Zaza leaves high school with so much to be proud of above and beyond breaking Deworski Odom's record.

Author’s note: Walking and talking with this young man has allowed me to experience the side of a champion that few have seen. There is a serious side to being a champion of this caliber, but there is also so much more. Many times, champions are portrayed as being arrogant and unapproachable.  But what many people don't get to see is the side of a champion away from the track and away from the competition.  If you can catch Zaza off the track, don't hesitate to say hello and you'll get to see the other side of this champion who has as he puts it "I’m a pretty open person" .

The full interview on video by Patty Morgan

Check out a recent story on Deworski Odom on PennTrackXC