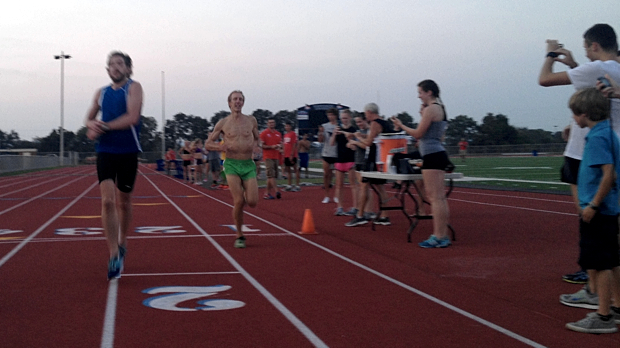 Steve Spence finishing up his fine 4:51.4 clocking in the mile.  (Photo courtesy of Laura Antinucci and Patty Reis)

Steve Spence, 1992 Olympic marathoner and 1991 World Championships Bronze medalist in the marathon, continued his streak of sub-5:00 minute miles for the 38th straight year.  The streak began in 1976 when Steve was a high school freshman.  Since then the streak was kept alive with relative ease, as Steve routinely went under 5 minutes during workouts and race efforts.  It wasn't until 2009 that Steve started to take the streak more seriously, and has since been able to go under the mark on a steady diet of distance running prior to drilling down on the speed to prepare for a fall of 5k and 8k race efforts.  Check out video of the race below and an interview with Steve on the history of the streak and what races are up for him next.