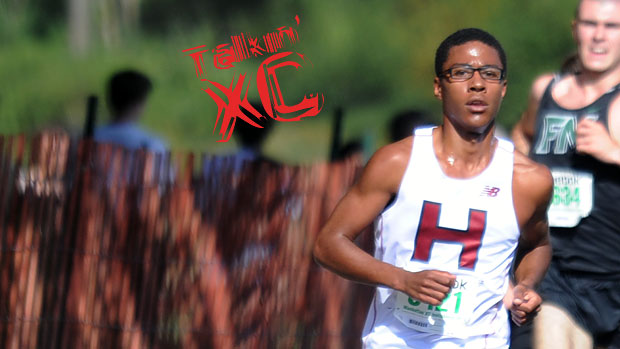 PennTrackXC: How is your fitness now that you are nearing the end of the 2013 season. What excites you most about the meets to come?

Tony Russell: My fitness is coming along very well, i still have a lot left in the season too. I'm was excited to race against CBA this Saturday.

PennTrackXC: Which 2013 meet has been the most important for you thus far, and what did you learn from the race?

Tony Russell: I haven't actually had a real race yet besides a tri meet. Manhattan was my first big race -- ed. note: Russell came away as the Eastern  States champion with a time of 12:20 in the 2.5 mile race.

PennTrackXC: What kind of adjustments, if any, have you made this season?

Tony Russell: We're sticking with the same training as last year. I actually started my season with a stress fracture. I began training in July and I've been rolling into shape ever since.

PennTrackXC: Who has influenced you the most in your life and what they meant to you and your success?

Tony Russell: I'd say the person that's influenced me the most is my coach without a doubt. I wouldn't be where I'm at without him and I wouldn't have all of the opportunities that I have now without him.

PennTrackXC: What are your keys to success when it comes to your training program?

Tony Russell: I do the same training as the 8th guy on the team and I think that is what helps me the most.

PennTrackXC: What is your most memorable performance in a cross country race over your career and why?

Tony Russell: My most memorable performance would have to be my regional win [District 1 Championships in 2012] when [teammate] Reiny Barchet placed third [in 15:22]. That was the coolest moment in my running career.

PennTrackXC: What is your greatest non-running experience in cross country so far and why?

Tony Russell: My greatest non running experience in XC would be meeting Galen Rupp at [Nike Cross Nationals] during dinner with the pros.

PennTrackXC: What are your goals for the 2013 cross country season?

Tony Russell: My goals this season are to break 15 minutes, win states and regionals again, and maybe even add a team national championship.

What's your favorite jam during a long run?
- I never listen to music on a run,

Favorite cheat food?
- I also don't have a cheat food, i eat whatever I want during the season. I never really watch my diet.