It was a great race. But the Archbishop Wood girls had far more on their minds than just a race.

Racing 5000 meters is tough enough without the weight of a tragedy occupying your thoughts, and those of your teammates and extended school family. But that is exactly what the Archbishop Wood girls did on a brisk, cloudy afternoon at Belmont Plateau in the Philadelphia Catholic Championships. 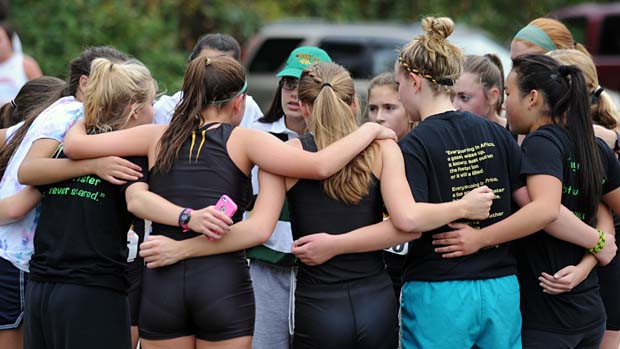 While their feet were striking the trail with guts and determination, their thoughts and prayers were constantly with their assistant coach Betty Doyle and her husband, Thomas, who have been in a southern Virginia hospital for over a week. Head coach Fran McLaughlin says the couple was on their way to see their son in Florida late on the evening of October 10th, when they were both struck by an object that went through Thomas' driver side window. With her husband suddenly unable to steer, Betty was able to maneuver the vehicle to a stop and pull to the side of the the interstate.

McLaughlin says speculation is that the object was a gun shot.

Thomas is paralyzed from the neck down, but does have feeling in his arms. Betty was injured as well, but is expected to recover fully from her physical injuries.

The season goes on.

Ranked as the #1 AA team in PA this season, Archbishop Wood has been on a mission to erase a disappointing 7th place finish from last year's state meet, when they had high hopes of becoming the first D12 champion in cross country in the state.

But a tragedy like this in such a close-knit community as a cross country team could have proven too much to overcome.

"They were a bit lethargic at the beginning of the week," says McLaughlin. "But they rebounded and had a great workout Wednesday."

McLaughlin cautioned the girls to not let emotion dictate too fast an early pace, and they were able to heed his advice.

The sixth runner tie-breaker went to O'Hara… but McLaughlin was far from disappointed.

When you spend three hours a day with your assistant coach in all three seasons, you become like family. And McLaughlin says Betty is well-loved in the Wood community, and a totally selfless person.

"The girls really wanted to win this for her, but they gave it everything they had. I couldn't be more proud of how they handled themselves."

Archbishop Wood was not alone. Not in the PCL.

But McLaughlin says it was the display of support from their competitors that really helped he and his team to cope and not feel alone. "The O'Hara girls were wearing yellow ribbons. And the Hubert's girls had BD (for Betty Doyle) on their arms with a cross. That support was important."

The XC team and extended Wood family and alumni held a Mass Friday night at the school and Skyped it to their coach in Virginia. "I think it was a help to Betty," McLaughlin said.

"We still have a lot to do to achieve our ultimate goal," McLaughlin says.

And after the 10 days they have had as a team and family, racing 5000 meters is the easy part.

The family is offering a reward for information that leads to a conviction on the crime.