Story and photo by Phil Grove

Coaches oftentimes teach – and yes, sometimes even preach – the sacrifices that individuals must make for the benefit of a team.

Remember the adage “there is no ‘I’ in team”? 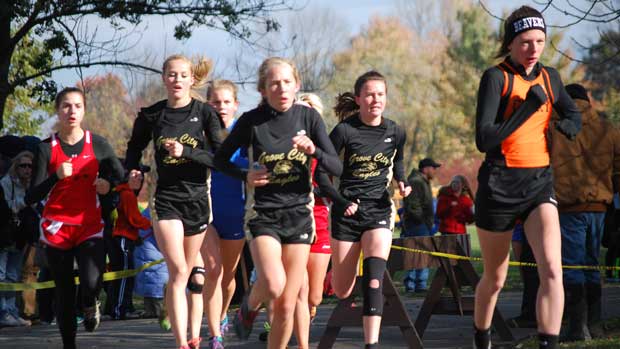 In pursuit of what would have been the school’s first-ever state qualifying berth for its girls’ team, Grove City Area showed as much resolve, commitment and dedication on the last Saturday morning in October as most coaches hope to get from their teams during an entire season.

“We started out the year, and we were healthy,” head coach Mike Sample said of his sophomore-dominated team. “We were very determined to have a good season, and it was looking very early like we were going to have the season we’ve been waiting to have for quite some time.”

At the Red, White & Blue Classic, senior Mary Jaskowak placed 16th overall out of a field of nearly 500 runners in one of the top early season invitationals. Ten days later while on her way to victory in a critical District 10 dual meet, the senior suffered a fractured left fibula about a mile from the finish. The Eagles won the meet but lost the contributions of a state qualifier for most likely the rest of the season.

“Mary broke her leg and that just kind of wiped us out,” Sample said Saturday after his team finished sixth in Class AA at Sharon’s Buhl Park. “The thought of her even coming back kind of gave us a shot in the arm, a little renewed hope. Her sister Catie ran extremely well, picked up the slack.”

The days leading up to the District 10 championship meet brought about the possible return of their senior leader, who was no longer wearing a boot and was cleared medically to return to physical education classes with the recommendation NOT to compete again this season.

After 5 ½ weeks without running a step, Mary Jaskowak decided race morning to do what she could for her team. She lined up alongside junior Mikayla Wimer, who Thursday evening suffered the loss of her father, Richard, after a seven-month illness.

“The girls never quit and they always believed,” Sample said. “And then when Mikayla’s father passed away two days ago, it was like that’s just too much for a team to overcome.

“As good a group of girls as they are, it was just too much to overcome today. We really were on paper a better team than what we ran today and what we’ve run all season long. There was a lot on people’s minds besides just running a race today.”

“My hat’s off to them,” Sample said. “They are a complete joy to coach and a great group of young ladies.”