Putting it simply, Marianne Abdalah does not feel comfortable in crowds.

That personal preference for open space explains two major things about her life. 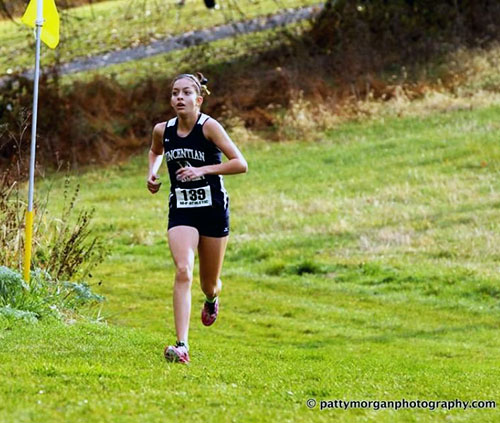 The emerging distance star is much more relaxed - so to speak - at the front of a race. Many times she is alone from start to finish. There are never any crowds at the front, and that is just the way she likes it.

The kinda-aversion to crowds also explains her choice of a high school.

Abdalah attended 6th, 7th and 8th grades at Marshall Middle School in the North Allegheny school district. While she liked the people, there simply were too many in one place.

"I like the small school environment. You can get to know everyone."

With 67 acres in the North Hills of Pittsburgh, and just 250 students at the private co-ed Catholic high school, Abdalah believes she has found the perfect home.

But don't think for a second that the bucolic setting of Abdalah's school is a reflection of her personality. This girl is competitive.

Running, and the drive to be the best, is a family thing. Literally.

In fact, for those who remember the network TV show "The A Team," you'll appreciate knowing that according to Marianne's mother, the family of five refers to themselves as exactly that. Sans the armed confrontations, of course. But a force to be reckoned with. Younger brothers Rene and Sergio; now in 6th and 1st grades, respectively; are runners.

Abdalah started running when she was just seven. The same age that her mother, Kim - a Boston Marathon qualifier - started running competitively in Ohio. Her father, Marvin, was the late bloomer. He didn't start running until he was ten. He grew up in Florida.

The family first lived in Pittsburgh, but moved to North Carolina where Marianne started running competitively at seven. Kim even started a track program at Marianne's school.

And it wasn't long before Marianne started moving to the front of races. She first medaled in an AAU XC national meet in Decatur, Alabama at nine - where she visited the Jesse Owens Museum. A fitting place for a visit by a passionate runner.

Back in Pittsburgh as she was entering the 6th grade at Marshall Middle School, Marianne put her mark in the record books, getting the "Trifecta Award" for setting invitational course records for her age at three big invites - Fox Chapel, North Allegheny and Slippery Rock. Her final middle school race at North Allegheny put her on the boys' all-time list with a 10:47 3K.

But for Marianne, that would be it for her middle school career. She chose not to go to the USATF Junior Olympics National Champs in the 13-14 year old group. Abdalah had some serious business to prepare for - her freshman high school cross country season.

She tries to mix up the training. Under the guidance of her parents before beginning high school, Marianne combines speed and distance year-round. She doesn't yet exceed the 30's in weekly mileage, opting to leave plenty of room for growth.

Her current coach is Vincentian Academy coach Dan Carlino, who says he has never seen a runner so dedicated to her craft. While her parents obviously still direct the regimen around her lifestyle, her coach has been directing her training since the summer.

Moving on to high school, Abdalah had a goal in mind. To win four straight PIAA Class A District 7 (WPIAL) Championships, and also run the table (course) at the State Championships.

As we now know, she is one-for-one, with three more years to go.

Along the way, she started making an early impression.

She was 2nd to a rising sophomore star, Kelsey Potts of Mount Lebanon at the big Red, White & Blue Invitational in early September.

She captured first at the Slippery Rock Invitational, beating another super soph in Alexis O'Shea of West Allegheny.

At the PIAA Foundation meet - getting a peek at the state course - she took first in the White (Small Schools) race in the 5th best time of the day.

In early October, back at Schenley Park in Pittsburgh on a different course than RW&B, she was 2nd to one of the state favorites in AAA, Brianna Schwartz of Shaler Area.

Schartz got the better of her again at the big Tri-State Coaches Association meet at Cooper's Lake.

Back at the same venue for her district meet, Abdalah had the 2nd fastest time on the day in three classes, only bettered by Schwartz again.

But nine days later - back at the Hershey Parkview course for the state meet - she achieved a new level.

She had the fourth fastest time of the day, behind only the course-record setting AAA Champ and US#9 Tessa Barrett of Abington Heights; defending state champion, US#21 Courtney Smith who runs for US#2 Unionville; and US Watch List star Madi Clahane of Cumberland Valley - who went 1-2-3 in AAA. Fourth and fifth in AAA? Schwartz and Potts. 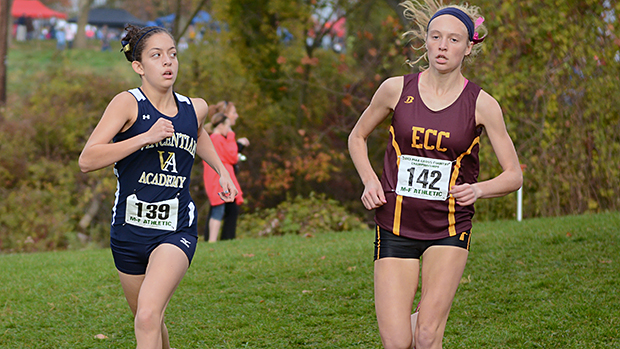 But the biggest accomplishment of her day was running away from defending Class A champion and 2012 Foot Locker Finalist Kennedy Weisner of Elk County Catholic. Abdalah's 18:24 made her the 4th best performer on the course, and five seconds up on Weisner's winning time of 2012. (Editor's note: Weisner was unknowingly battling an ankle injury that would end her XC season-but she was nonetheless impressed by the freshman's race.)

As for Abdalah… "I appreciated the competition. Having someone with you is important."

But for Abdalah, the state race was a statement race for her. "I came in as the underdog, and everyone wants to see the underdog win. But I wanted to surprise people - pull the big shocker," say Abdalah. "I wanted everyone to see that I could hang with the best."

And a shocker it was. 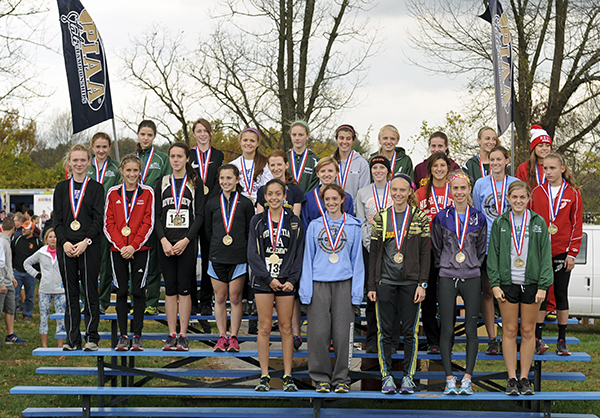 That's because she has some unfinished business with the USATF Junior Olympic XC Championship.

So Abdalah ran the USATF Three Rivers qualifier eight days later - back at Cooper's Lake - to start her journey back to nationals. Even though she did not actually need to run the race, she felt she had to. All she did in the combined race (boys and girls in one race to get ahead of the weather), was run a 4K in 14:46.6, the 4th best on the day - boys and girls.

And she will run this Sunday (11/24) in the Region II meet, also at Cooper's Lake, to get back to Nationals. Joining her will be her 6th grade brother Rene, who was 2nd in on the November 10th in the Elementary Division 3K. First grader brother Sergio has also started in the family sport.

Why USATF Nationals for Marianne?

She was 2nd in 2012 and the girl that won moves up an age group. And Abdalah has it all in perspective.

"There are only so many opportunities to be a national champion. This is one of them."

So it's off to San Antonio, Texas for the December 14th race. The same day as Foot Locker Nationals.

And there is no regret for missing one year of Foot Locker or NXN.

She sets her goals one at a time. Without fear. Without doubt. Just like her two main role models - Marcus O'Sullivan and Steve Prefontaine.

"I went to one of O'Sullivan's camp and got to talk about his training. There is something about him. He is not afraid."

As for Pre? "His quotes are very inspiring. It is how I live my life. Running is what I have."

Abdalah's long-term goals are what any talented runner would include as a dream. With a few stops in her career as state champ, qualifier for the Penn Relays, Millrose, and more. Plus some all-American awards along the way.

Basically, out in front of the pack. Alone.

Right where she feels at home.