It appears nobody told Brianna Schwartz that you shouldn’t run a PR, let alone a state record, in the opening race of your indoor season.

Thank goodness for that. 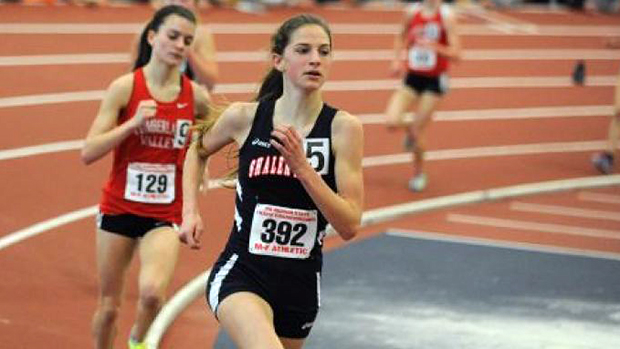 Facing national-class competition, the junior standout from Shaler Area was in late-season form, breaking a Pennsylvania all-time record and running arguably the best double thus far in 2014. Schwartz won the 1,600 meters at the SPIRE Scholastic Showcase in a US#3 4 minutes, 42.10 seconds, besting Angel Piccirillo’s indoor record from the 2012 state meet at Penn State.

Targeting 54-second laps on the 300-meter oval, Schwartz was out to finish her initial race of 2014 in 4:48 to 4:50, according to Bair. With fellow Foot Locker All-American Amelia Paladino giving chase, Schwartz took the lead from the gun and never looked back, running ahead of her goal pace and gaining about a second per 400 meters on the West Virginia senior.

With recent sub-zero temperatures and plentiful snow cover forcing changes in training statewide, Schwartz also was entered in the 800 run for some additional work in advance of the Tri-State Coaches and state indoor championships, Bair said.

So about 65 minutes later, Schwartz toed the line in the first of two sections of the 800, along with Michigan’s Ersula Farrow, who entered the day at US#3, and the Villa Maria duo of Claire Brown and Grace Trucilla.

Schwartz and the rest of western Pennsylvania’s best will look to heat up the Zafirovski Dome at Edinboro University next Saturday in the Tri-State Coaches meet. The junior is scheduled for both the 800 and 1,600 runs.