There is a bit of a mid-distance renaissance occurring this year in Pennsylvania
on the indoor track circuit and it is incredibly exciting. 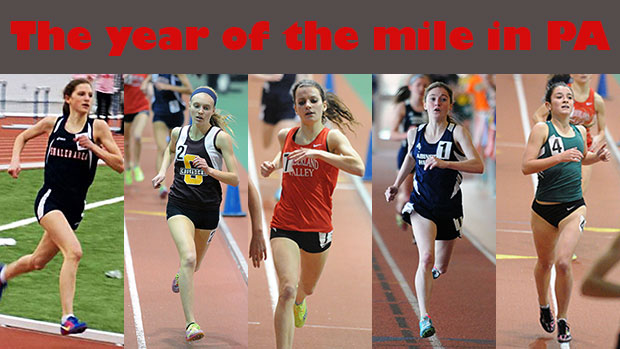 To most fans in the know this should come as no surprise as there are a host of talented runners in the state.  But the girls mile in particular now features 4 runners under 4:50, and that is pretty incredible for indoors.

Three of the girls finished 2-4 in the prestigious Millrose Mile at the Armory in New York last weekend, in a truly dominant and impressive display for one state.  Kennedy Weisner (Elk County Catholic) was 2nd in a time of 4:48.16, Tessa Barrett (Abington Heights) was 3rd in 4:49.16 and Mady Clahane (Cumberland Valley) took 4th in 4:49.17.

Kennedy is certainly not a surprise, as she has run the same time outdoors (for 1600m), but her time was her fastest ever, indoors or out, and certainly shows she is back after cutting her cross country season short due to injury.  Kennedy remarked, “This indoor season is going better than I could have possibly imagined at the end of cross country season!  I felt that I was fit enough to run under 4:50, so I am very happy with the 4:48”.  Kennedy was going for the win but said she was happy with how she competed in the race.

Tessa Barrett was certainly a surprise, as she is more of a true distance runner, having won the Foot Locker CC Nationals back in December.  She also crushed her previous PR of 4:55.63 (1600m) from outdoors last year.  Tessa dropped a full 10 seconds from her qualifying time at the Millrose Games Trials, leaving one to wonder how much more she has in the tank.  Barrett didn’t hold back her emotion with her race, saying, “I am thrilled with my new PR in the mile!  I really wanted to challenge myself this winter by jumping down in distance to the mile to work on my speed, so I was thrilled to break 4:50.”

Mady Clahane was also a surprise, as the talented sophomore shaved more than 8 seconds off her previous best 1600m time of 4:57.43 outdoors from last year.  Mady was very happy with the time, stating that she didn’t think she would crack 4:50 in the mile until the state meet in May.  She also has the mental mindset of a veteran racer, commenting on the race that “I think that I was (competitive)!  I knew that every one of these girls were good and that they all wanted to win.  I just made sure that I got out fast and didn't let anyone push me around.  I tried to stay with the top group for as long as I could!”

But wait, I did say four girls cracked 4:50 over the weekend right?!  Well, crushed might be a more accurate discriptor as junior stud Brianna Schwartz (Shaler Area) battled with West Virginia star Amelia Paladino, and won with a big PR of 4:42.10 for 1600m at the SPIRE Showcase in Ohio.  The time, 4:43.73 when converted to the mile, breaks the state record of 4:44.20 set by Angel Piccirillo in 2012.  What a statement to make just a few weeks out from the state meet.

Her fellow competitors had great things to say about her after their own impressive performances in New York.  Tessa: “I am so thrilled for Brianna!! A 4:42 is incredible! She is an incredible athlete with a large depth of talent. I'm expecting to see great things out of her this indoor season and in the outdoor season!”  Kennedy: “She has been running very well this past year.  PA is so deep in the mile this year.  It's crazy that we already have 4 girls under 4:50!”

The mile state record of 4:43.73 and Barrett’s 9:45.77 3000m state record mark the first time in state history that indoor state records were set prior to the indoor state meet.  That will make this year’s action all the more exciting to watch, which you can do right here.  (Thanks to Don Rich for figuring out the stats on this one).

The whole Millrose experience is amazing. It is so cool to be surrounded by professional athletes and to see them up close. One really neat thing happened when I was warming up. My mom slipped on some ice, and Bernard Lagat stopped to ask if she was okay and helped her up. He was so nice!!

The competition was phenomenal, and it was really fun to race against some of the best milers so far this season!  My coolest memory from Millrose was definitely meeting Mary Cain, and she knew who I was!  She is such a nice person.

Being 10 feet away from Mary Cain and Nick Symmonds as they were racing; it was the coolest thing ever!  Also, getting all the free New Balance gear and getting my racing bib with my last name printed on it was SO awesome!

The state's best boys miler, Tony Russell (West Chester Henderson) had lofty goals for Millrose and made a valiant bid to win from the front of the race.  The out-of-this-world kick by New York native Luke Gavigan proved to be too much as he won in 4:08.96.  Tony was 4th in a fine 4:12.14.  It wasn't quite the result he wanted, but he'll bounce back for the state meet.

Let's not forget about a 5th talented girls miler, Marissa Sheva from Pennridge.  Marissa boasts a 4:54.90 mile PR, but was only able to manage a 4:58.69 for 8th place at Millrose this year.  Just like Tony, she'll be ready to rock by the state meet.