PA AA State Champion and New Balance national champion Michael Biddle was victorious at the JavFest at East Stroudsburg with a mark of 211-11 to earn a 2 and a half foot win! Runner up spot went to World Youth champion Liam Christian of South Carolina's Academic Maget. His mark of 209-5 was his 3rd best for the year!

Biddle took the lead on his 3rd throw as the first of his two best throws of the competition. Biddle was the only thrower over 64 meters. 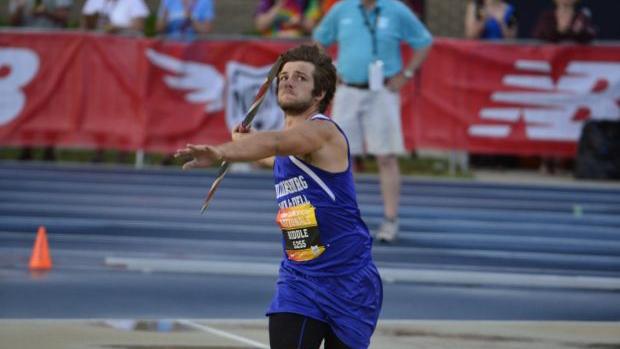 3rd place went to Parkland PA's Derek Ziegenfuss, who threw a career best 205-1, bettering his old 204-2 PR set back at the end of March. North Allegheny PA's Andrew Manz also threw a career best on the day. His mark of 196-5 got him 4th place. Rounding out the top five was Grayson Hill of Cathedral Prep with a mark of 194-9.

In the girls competition, Sophia Rivera from Brentwood, Missouri won her 3rd meet of the summer by a narrow three inches over Katelyn Gochenour of Nebraska's Marian High School 159-6 to 159-3. Rivera took the lead on her 5th throw, giving Gochenour a target to shoot, but she fell 9 centimeters short of snagging victory. Emma Fitzgerald of Thayer Academy Massachusetts finished 3rd in 147-5.

Results can be found HERE!