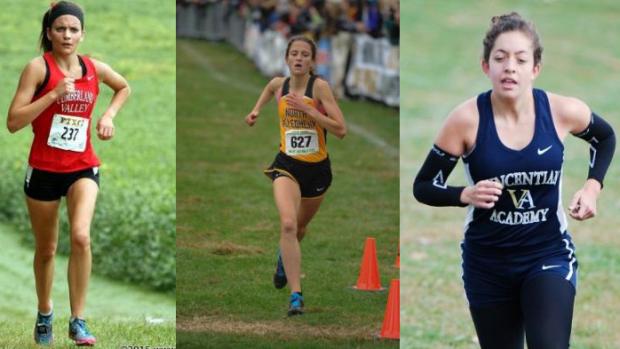 Mady Clahane (left), Madeleine Davison (center) and Marianne Abdalah will be among the PA threats to make Foot Locker Nationals.

The girls of Pennsylvania will look keep the Foot Locker Northeast crown in state after Shaler's Brianna Schwartz won it last year. Schwartz has since graduated, but many PA runners will be in contention to take one of the top ten spots and qualify for Foot Locker Nationals in San Diego. The Northeast Regional takes place Saturday from Van Cortlandt Park in the Bronx, New York.

The top returner from PA is Madeleine Davison. She didn't compete in the PIAA this year, but still put together a solid fall. It culminated with an impressive performance at the NYRR Fred Lebow Cross Country Championships, where she was the second female across the line in 17:47 at the Northeast course, Van Cortlandt Park. That was six seconds faster than her 17:53 that placed her fourth at Foot Locker Northeast last year on the same course. That should quell any worries about the kind of shape Davison is in headed into her postseason.

Marianne Abdalah of Vincentian Academy will look to improve a few places from 2014 and book a trip to San Diego. She was 13th last year, just eight spots out of the top ten, so Abdalah will certainly be hungry for more this year. The junior hasn't lost this year, turning in impressive wins at Foundation, Grove City, District 7 (WPIAL) and the Class A girls race at states. She said after states that she feels her fastest race of the year is still ahead of her. Abdalah will be one to look out for in New York.

Cumberland Valley's Mady Clahane will another threat for the top ten. She was 23rd a year ago, and is coming off some strong races at Mid-Penns and District 3, where she won her fourth consecutive district crown. She was fourth in the state in AAA, but is surely looking for more at Van Cortlandt. 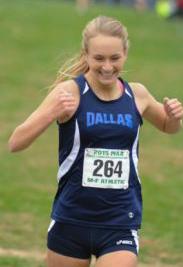 AA state champion Ally Rome (left) should be in the conversation as well. The Dallas senior will look to ride the momentum generated by her second straight state crown into Foot Locker. Her sister Regan has qualified for San Diego in the past and was christened as All-American at NCAAs this past weekend. Ally will look to carry the legacy.

PA has a host of potential qualifiers outside of the aforementioned four. Wilson's Alison Willingmyre (4th at Paul Short, 2nd in District 3 AAA, 3rd in PIAA AAA) has turned in a solid season to this point. Lauren Finikiotis of Oakland Catholic was 11th at AAA states, but won District 7 and the Red, White & Blue Classic. She could be a long shot pick for San Diego. Cardinal O'Hara's Olivia Arizin and Lansdale Catholic's Kayla Connelly will also look to have big races at Foot Locker.

Notably absent from the list of entrants is Mount Lebanon's Kelsey Potts. Potts was Foot Locker finalist in 2014. She noted after her win at Tri Coaches win that she's been dealing with health issues this season, and it doesn't look like she will see a return trip to California.

Hannah DeBalsi from Staples High School in Connecticut is the top returner from the region. She's a multiple time Foot Locker finalist and is likely seen as the favorite heading into Saturday's race.

You can check out a full list of entries here.

The Championship Girls race goes off at 11:30am from Van Cortlandt Park. Be sure to follow @PennTrackXC and @Milesplit on Twitter for live updates from the Bronx. Check back at night here for photos, race video, and post-race interviews after the race.