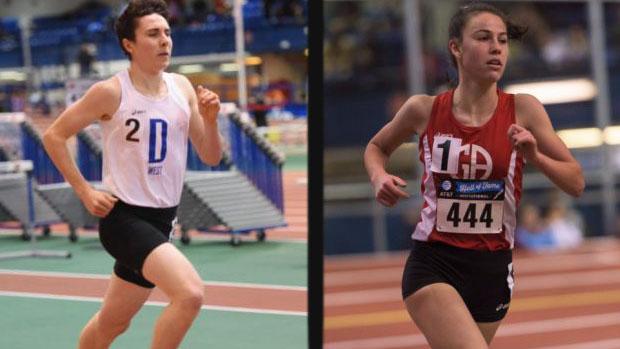 The field for the February 20 Millrose Games High School Mile have been officially announced. The mile entries includes four girls and two boys from Pennsylvania in the prestigious race.

Representing PA in the girls race will be Gabrielle Wilkinson of Friends' Central, Mady Clahane of Cumberland Valley, Abbe Goldstein of Germantown Academy, and Olivia Arizin of Cardinal O'Hara. Wilkinson received an automatic bid into the race with her win at the Marine Corps Classic back on December 29. The rest received at-large bids. Currently Goldstein sits at PA#1 in the mile after her near win at the Millrose Games Trials. Clahane is PA#2, Wilkinson is PA#4, and Arizin is PA#5. All have run under 4:58 this season.

On the boys' side, Downingtown West's Jaxson Hoey and Nick Dahl of Germantown Friends will toe the 11 runner start line. Hoey ran a PA#1 and US#4 4:12.05 at the Millrose Games Trials for the win and automatic bid. Dahl won the Armory Track Invitational mile last week where he received his automatic qualifier, running a 4:20.37.

Check out the full field at NY MileSplit