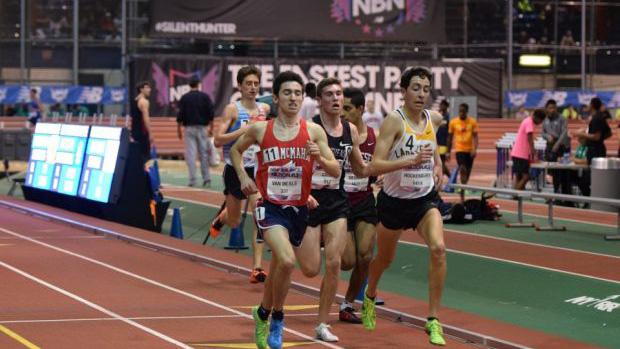 Lake Lehman senior Dominic Hockenbury capped off his indoor season with a third place finish in the 5000 meters at New Balance Nationals Indoor at The Armory this past weekend. He ran a PR of 14:45.09, over 23 seconds faster than he ran in the same race a year prior. Now the senior turns his attention to outdoor track, where he'll look to win his third straight AA title at 3200 meters. He has plenty of other goals, too, as he moves into his final high school season before he begins his collegiate career in the fall at Syracuse University. Hockenbury was kind enough to answer some questions for PennTrackXC on his indoor nationals race and his goals moving forward into the spring. Read the Q&A below:

PennTrackXC: This is the second season you've run the 5K at indoor nationals. Talk about your decision to race the 5K over the 2 mile.

Dominic Hockenbury: With last season, the decision to run the 5k over the 2 mile was much easier.  Last year my coaches and I felt it would be a great event for me to try out and that I would be more competitive in it.  This year, however, we felt I would be competitive in the 2 mile but I was still in great cross country shape and was running mostly distance over the winter thus we decided to opt for the 5k instead. In addition, I feel I am more suited for the longer races of 5k and 10k and running the 5k now gives me some experience for the jump up in distance next year.

PTXC: How much differently do you approach running a 5K as opposed to a 3K?

DH: Running the 5k and 3k I like to get out fast towards the front of the pack until the pace settles in and begins to string out.  Naturally, I like to run my races from the front, string out the field and take the kick out of the kickers drafting off my back.  With the 3k the race is short enough that I need to take the lead early on and start getting to work on quickening the pace.  While in the 5k the race is long enough that leading the whole way is not my best option.  Instead I like to get out into a good position and stay relaxed sitting in the pack near the front for at least the first 2k.  Eventually, I like to make my way to the front where I can open up my stride and work on negative splitting. 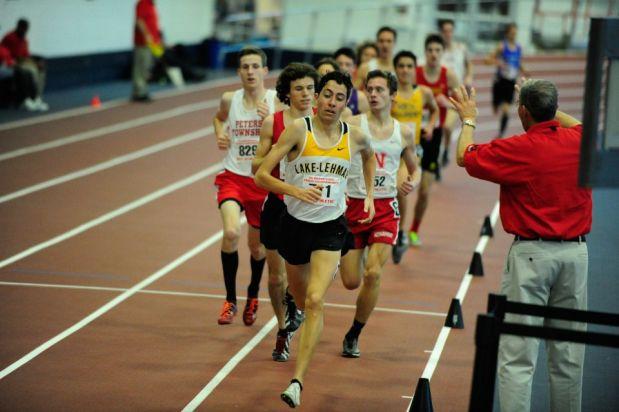 PTXC: Was there any more motivation to run well after finishing second at states in the 3000?

DH: There was definitely some motivation after the states race.  I never like losing any race, but sometimes it takes losing some races and getting knocked down a few levels for you to make improvements. This indoor season I was doing a lot of work on increasing my finishing speed at the end of the race.  At states my finish was a lot better than it usually is; not quite as good as Jake's, but my coaches and I were happy with the improvement and it gave me some added confidence for later in the races.

Did you think you were capable of a 14:45 coming into the race?

DH: Coming into the race we  knew I was going to be in decent shape for the 5k distance, also it being my second time running the 5k indoors I had some experience and knew what to expect. Talking with my coaches we felt that running in the mid- to-low 14:30's was a solid goal and with the right race it was achievable.  Once the gun went off, that was quickly thrown out the door as nobody seemed to want to take the lead and we came through in a large pack at a slow pace.  As the race went on, the pace picked up and we began to negative split.  After the race my coaches and I were happy with the time for how slow the first mile and a half were, we were also excited that I ended up running the last mile of the race 23 seconds faster than last year.

DH: This year winter training consisted of mainly distance runs with a few up-tempo workouts when the weather allowed.  I ended up getting a bit late of a start, for I was dealing with some viruses over the Christmas break and it took me a few weeks to recover.  Once I was back up to shape, I was able to keep my mileage up around 60 a week, with some good hill workouts, tempo runs, and the occasional track workout. 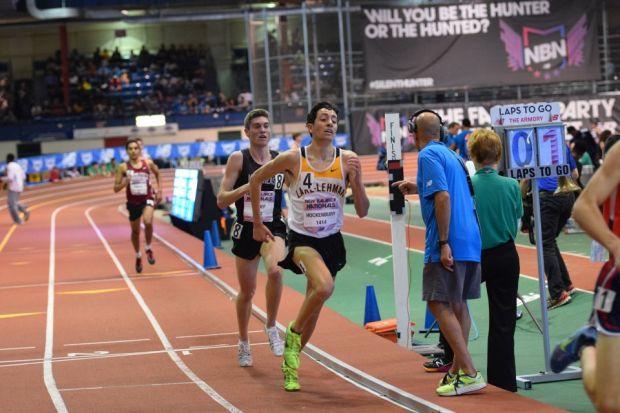 PTXC: What will the training look like for you leading up to the outdoor season?

DH: After NBN, my coaches and I decided to take a few days easy running some light distance to recover from the indoor season.  We plan on working on some shorter races to work on my finishing speed and to prepare me for the 3k at the Penn Relays, Henderson and States. Once the season gets rolling along we will get into our usual 2 mile training.

PTXC: What are your goals in your final high school season?

DH: This outdoor season my coaches and I set some pretty high goals that we have been eyeing up over the past few years.  I definitely want to lower my mile time, and work on some of the shorter distance events.  Next, I would like to have strong races at the Penn Relays, Henderson, and the state championships.  Between those races my coaches and I are striving to break the 9 minute barrier for 2 miles. Lastly, I want to work on getting prepared for college running and to enjoy my last season as a high school runner.

Editor's Note: We think that Hockenbury's 14:45.09 at New Balance Nationals Indoor is the fastest indoor 5000 meter time by any PA boy. If anyone knows of a faster time, let us know! Email dbeck@milesplit.com.