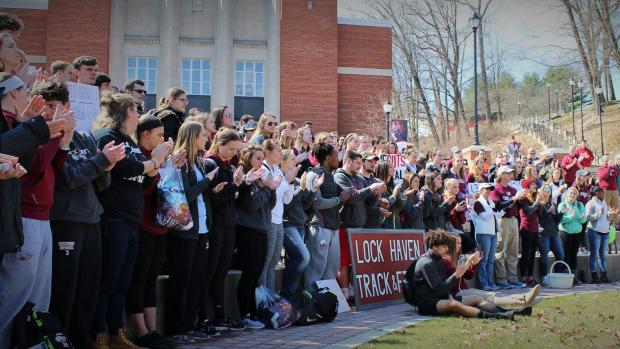 A few months ago, school administration proposed cutting both the men's indoor and outdoor track and field programs, along with women's swimming in an effort to cut costs and comply with Title IX at the university. Women's swimming was retained a few weeks ago.

"It is my professional judgment that it is in the best interest of the University to discontinue the Men's Indoor Track and Field team at Lock Haven University effective the conclusion of the spring 2017 semester," LHU president Dr. Michael Fiorentino wrote said in a message posted on the university's website. "Men's Outdoor Track and Field and the Women's Field Hockey Division I status will not change. However, we will continue to review budgetary and Title IX considerations as it relates to athletics in the coming year."
Fiorentino cited Title IV and financial concerns in his decision to cut the indoor team. But he also noted that "proposals presented by athletic administrators, faculty, coaches, and students," and "communication from alums parents and the community" were contributing factors in his decision to dave the outdoor team. 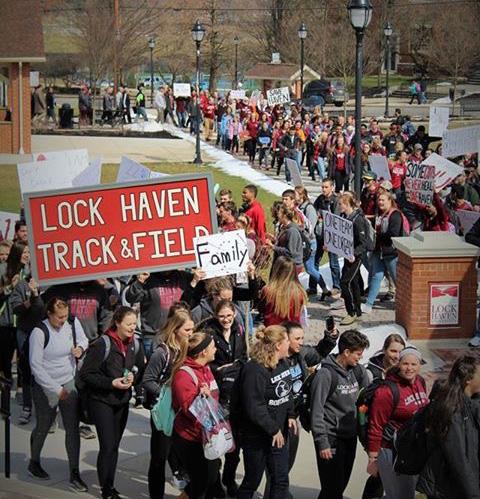 Photo by Katie Klercker
After the proposal was made public last month, student-athletes from LHU launched the SaveHaven movement. A Facebook group had over 2,200 and provided an outlet for current athletes and alumni to share experiences. An online petition to save the track teams amassed 2,860 signatures. Last week, a SaveHaven rally was held, where 250 students, alumni, and community members attended, generating support for the movement.
Fifth year senior and member of the XC and track team at Lock Haven, Jack Felt was one of the leaders of the SaveHaven movement. Felt believes SaveHaven played a role the university's decision to keep outdoor track and field.
"The SaveHaven movement absolutely played a big factor in this decision," Felt said. "Supporters of our program offered amazing insight that i'm sure was analyzed. Although indoor was eliminated, SaveHaven allowed the administration to see how important our teams are to the university."
Lock Haven has been a very successful team in the PSAC and NCAA Division II ranks. The men's program have racked up nine PSAC and Regional titles in school history in cross country. On the track, it has won five indoor PSAC titles and four outdoor PSAC titles. Lock Haven has competed in track and field for 111 years.
"The overwhelming amount of support is truly breathtaking," Felt added. "I honestly believe we did everything in our power to save our teams and no one should feel defeated. Although this is not the outcome we wanted, we will still take take a lot away from this experience."