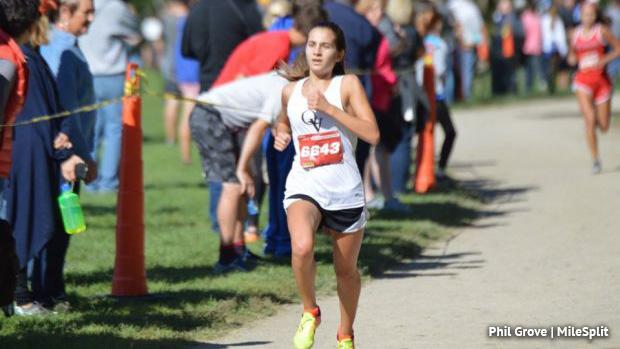 As a freshman, Annie Wicker was part of the Quaker Valley team that got 2nd in the state at the 2A PIAA meet last year. Wicker had a strong freshman track season, finishing with a 1,600 PR at the PIAA championships last spring.

Wicker's success carried over to the start of this cross country season where she found herself competing against some of the top names in the WPIAL. Last year at the Red, White, & Blue Classic Invite, Wicker ran a time of 20:14.12, but this year at RWB Invite, she dropped that time to 18:27.30. As a sophomore, Wicker has emerged as a major asset to the Quaker Valley team and runner we will surely see more of in the upcoming years.

Annie Wicker took some time to talk with PennTrackXC about her successes this season and what is next for her and the Quaker Valley team. 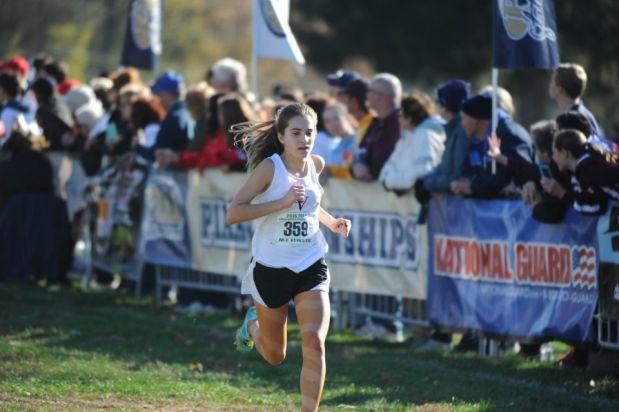 Wicker competes at XC States in '16 / Photo by Don Rich

PennTrackXC: You ran a huge PR of 18:27 at the Red, White & Blue classic invite earlier this month. Were you expecting to run that fast? How did you feel during that race?

Annie Wicker: I definitely was not expecting to run that fast at RWB. I had really high hopes for a PR and a top ten place, but I surprised myself with the time. During the race, I felt really good. We went out really fast which is something that I hated doing last year, but I just felt strong all throughout the race and tried to push it at the end to make sure I stayed in third and ended up with a decent time.

PTXC: What changed between your freshman and sophomore year to make this season so far successful?

AW: Between freshman and sophomore year, there isn't just one single thing I can put the changes down to. After track states I gained a lot of confidence, so I think that and a combination of harder and smarter training made the difference. Gaining that confidence definitely helped because it made me realize that I could run with those top runners and make a spot for myself there. As for the training, we've been pushing it a lot and trying to get as much as we can out of each workout. My two teammates, Audrey Durbin and Lucie Kubinski are a huge part of it too, because we're always running together and we push each other as much as we can.

PTXC:What is next for you? Do you have any individual goals this season?.

AW: Next up for us is MACs in October and then WPIALS. Individually, I just hope that I can keep improving and that my teammates and I stay healthy. I want to be able to keep the momentum from RWB in other races later in the season. 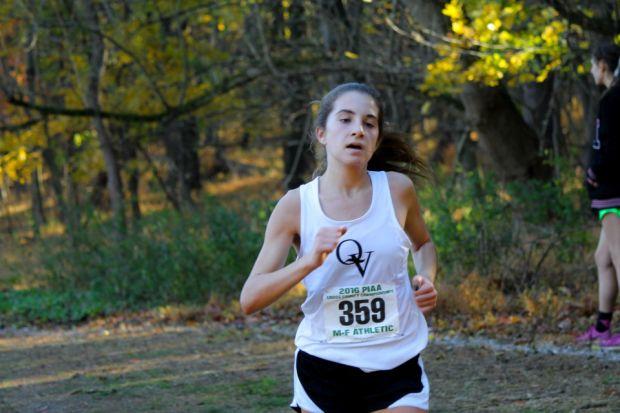 AW: Our team goals have been high since the beginning of the season. We've always wanted to win the state championship and after coming so close last year it made us a lot more determined to win this year. Even though we lost two from our top five, we have two seniors who are really strong and hopefully they can help us reach that goal. The main thing we're working on is staying healthy and avoiding injuries, since that's what stopped us last year.

PTXC: What got you into running?

AW: I started running in elementary school with the Girls on the Run program which, funnily enough, I wasn't very enthusiastic about at first! After that, running just became a part of my life and I kept at it through middle school and now high school. I never really thought of it as a sport, but rather just a fun thing to do. After a few middle school races I realized that running really was my thing and that I could keep it up through high school and hopefully improve.