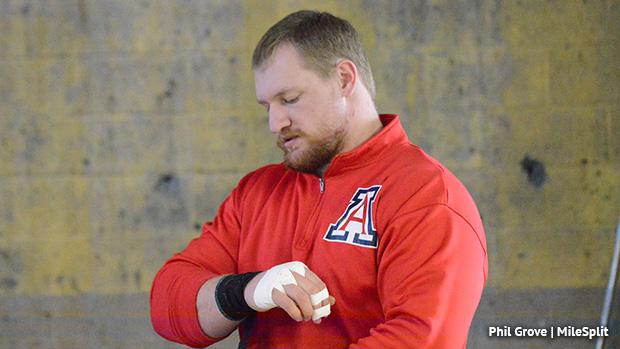 Jordan Geist's collegiate career is off to quite the start.

The University of Arizona freshman and former Knoch (Saxonburg, PA) High School star tossed a huge throw in the shot put at Saturday's UW Invitational in Seattle, Washington for the win. Geist launched the shot 21.45 meters (70 feet, 4 inches), a throw that is the top mark in the NCAA and the second best throw in the world so far this season. Only Tomáš Staněk of the Czech Republic (21.61m) has thrown farther this year, per the IAAF rankings.

Check out a video of the throw, via a tweet from @nationalthrows:

It's just Geist's second collegiate meet, but he's already making his presence felt. He now joins a select group of men to have throw over 70 feet with both the 12-pound shot put and 16-pound shot put (the official high school shot is 12 pounds, while the collegiate and international shot is 16 pounds).

Geist's 21.45m throw is also an NCAA freshman record, a school record, and facility record. As a Pennsylvania high schooler, Geist was a six-time state champ in the shot put (indoor and outdoor) and a three-time state champ in the discus. He accrued high school personal bests of 76-10.5 with the 12-pound implement and 68-4 with the 16-pound shot put.

Geist got some congratulations from a fellow former PA high school throws standout:

Watch an interview with Geist with PTXC's Phil Grove while he was home in Pennsylvania on winter break: