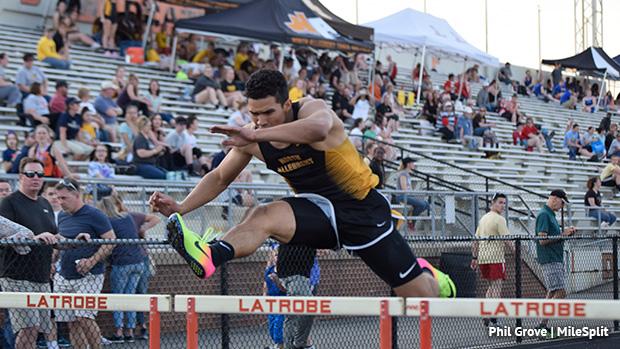 When you combine a schedule packed with big meets and some beautiful Friday and Saturday weather, you are bound to get some huge performances. The leaderboards were rewritten this weekend, and we'll do our best to break it all down throughout the week.

But one of the weekend's biggest storylines was how Pennsylvania's hurdlers performed. Fast time were put down everywhere you looked in Week 4. What makes it all even more impressive, is that each of the athletes excelled not only in the hurdles, but elsewhere on the track and field as well.

Let's break it down:

The USC recruit rewrote the record book in the hurdles at Latrobe on Friday afternoon. He went 14.02 in the 110-meter hurdles for the win, despite quite a bit of wind. Then he came back to win the 300-meter hurdles in 37.44, a current PA#1 time.

Owens also jumped 23-04 in the long jump, just off his career best and a current PA#2.

Green had a great indoor season and he hasn't skipped a beat heading into the outdoor campaign. He battled injuries throughout his career, but he's healthy now and the results are showing. Green PR'd in the 400-meter hurdles at Bullis in Maryland, dropping a US#2 52.50 for a runaway win.

Garland, the indoor national champion in the pentathlon, showed off his versatility once again to open up his season at the Viking Invitational at Perkiomen Valley. Garland demolished his previous PR in the 110-meter hurdles, running 13.69 (his first time under 14 seconds). That's a PA#1 and US#2. He added a win in the 300-meter hurdles in 39.46 (PA#4).

But his javelin performance was terrific as well. Garland posted another big PR, throwing 182-01 (PA#8), which is over 30 feet better than his previous PR in the MileSplit database.

13.82 for Perk Valley's Christina Warren in the finals of the 100 hurdles at the Viking Invitational! @PennTrackXC @milesplit @PvViking pic.twitter.com/9cT0qy5yQu

Warren put forth a great display on her home turf on Saturday, nabbing a pair of PA#1s. Warren went sub-14 for the first time in his career, running 13.82 for the win. That was good enough for a PA#1 and US#10. The indoor state champion in the 60-meter hurdles picked up where she left off and seems primed to go after the state title outdoors.

The senior also PR'd on Saturday at Bullis. Townsend picked up the win in the 400-meter hurdles, dropping a PA#1 and US#2 time of 1:00.91. She came from behind to earn the victory. The Pitt recruit has progressed nicely in the event since last season, when she ran 1:01.12 at the end of the season at New Balance Nationals Outdoor.