When the stakes are high and nothing but the best will do, most athletes and teams long for the friendly confines of their "home turf." 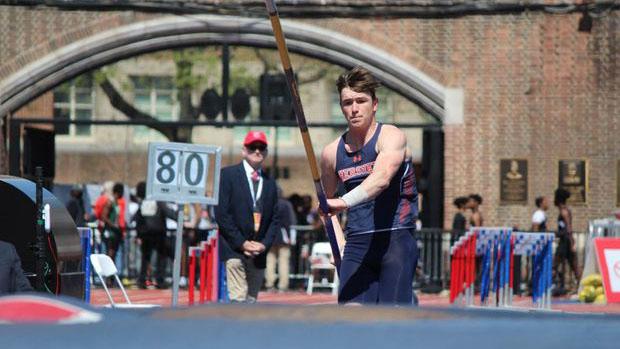 For Justin Rogers, a road trip down Interstate 81 in central Pennsylvania is a great idea and not something for which to be nervous. Saturday's drive to Chambersburg Area's track confirmed for the Hershey senior that this particular "pole vaulter's dream" is the perfect place for him to fly high, registering his second state record in less than two weeks.

"I've been saying it all year, Chambersburg is my favorite place in the world to jump," Rogers said after breaking his own state record in the pole vault with a first-attempt clearance of 17 feet, 2 inches at the Mid Penn Conference meet. "From freshman year on when I first jumped there at Mid Penns, I fell in love with that place.

"(The pole vault area) is in the perfect place, it's surrounded by the school in three areas so the only wind you're ever going to get is pushing you from behind as a tailwind. It's a pole vaulter's dream to jump there because every time you jump there, you know you are getting good conditions. Anything is possible with that. I've never not PR'd when I am jumping at Chambersburg. I am 3-for-3 with PRs."

Rogers' run of success at Chambersburg Area and his thus-far perfect 2022 outdoor season almost came to a screeching halt when the bar moved up to 16-3 after a "feel great" opening height of 15-6 was more than enough for the event win. The University of Virginia recruit needed all three attempts at a height that he has cleared in at least nine meets this season, averting a final miss "that would have completely ruined my day."

The next height of 16-9 brought with it a first-ever move to a 16-foot pole that generated surprises but not the kind that Rogers or his coaches expected.

"My first jump with the 16-foot pole, my coaches and I were expecting I'd bail on it," he said.

The opposite turned out to be the case as Rogers was over on his first attempt despite being "scared of that pole."

In comparing Saturday's 17-2 and his 17-1 former record in a dual meet at Susquehanna Township on May 3, Rogers said his current PR packed a bigger punch.

"It was more of an aggressive swing on that one," Rogers said. "I think I started to get more comfortable after I cleared that 16-9 bar. I was just ready to turn it up and get going. Coaches were with me, the fans were with me. There was great energy in Chambersburg, and I was really, really happy to get it done."

Rogers also said that his more than a decade in gymnastics is starting to pay the dividends that he initially doubted really were there.

"But the higher up you get and the more inverted you get with that swing, the more you understand the bar awareness, the body awareness in keeping your body tight and where it needs to be. A lot of these bars that I make, for example today at 17-2, I don't think would even be humanly possible without my gymnastics background. How you just have to feel where everything is without even looking, and gymnastics teaches you that perfectly."

Having started pole vaulting in December of his freshman year, Rogers now has a share of US#4 in 2022.