After registering the fastest overall times at both the WPIAL and PIAA championships in October and November, who could blame Brownsville Area standout JoJo Quarzo for being confident enough to want to extend her postseason and aim for a national qualifier?

It seems the only questions were: Would she get top five or top 10?

Would it be Bowdoin Park or The Bronx?

"At first, I definitely planned on going to the one in (New York City)," Quarzo said of her entry into the Champs Sports NE regional at fabled Van Cortlandt Park. "Then at the last minute, my soon-to-be college roommate was going to (Team Regionals Northeast). 'Huh, maybe I can try that one?'

Not one to shy away from competition, the North Carolina State signee positioned herself among a group of Pennsylvanians at the front of the field in the Team Northeast Regional race at Wappingers Falls, N.Y., before making the break that took her to victory Saturday over North Allegheny's Wren Kucler in 18:30.7.

"I kind of know how some races are going to go out (but) it is hard going into a meet like that when you don't know how everybody's racing," Quarzo said of her mindset heading to the starting line. "I just tried to stay at a good pace and when it was a good time to move, I just moved." 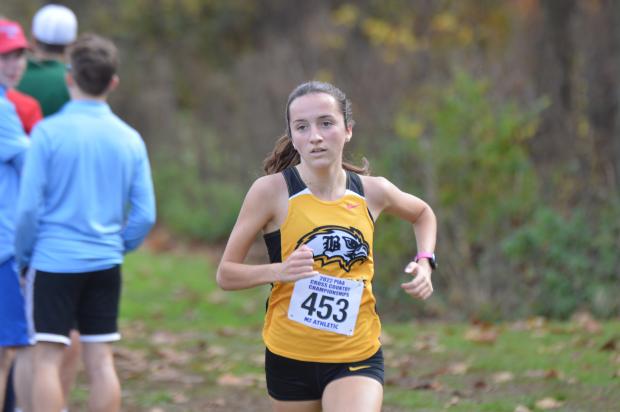 "I was feeling really good, and I feel like I kind of held myself back the first half of the race. Again, my goal was to just get in the top five, not to win it.

"Then when I saw the opportunity, that's kind of when I pushed it. I felt really, really good at the time, really strong."

Saturday's victory not only guaranteed Quarzo a spot in the national final in Portland, Oregon, but it also enabled her to leave the course along the Hudson River with a better memory than her first trip there three years ago.

"I did not have a very good race that year, for sure," the senior said of finishing 49th as a freshman in the 2019 Northeast regional. "It was very cold, it was freezing down there. Coming back into it (this year), I was like 'This has to be better than it was before.'

"The weather and everything was so much better. I'm just so much stronger than I was my freshman year, so I think that was a big thing."

In the Team Nationals final this Saturday, Quarzo will face talented harriers from coast-to-coast, including one she knows well and who lives less than an hour away: Morgantown (WV) senior Irene Riggs.

"Then when I saw the opportunity, that's kind of when I pushed it. I felt really, really good at the time, really strong."

"I'm very excited," Quarzo said of facing the Stanford signee and MileSplit No. 2 who recorded one of the fastest 5K XC times ever (16:02.1) in winning the Southeast regional. "We're very good friends. We're planning our flight together to go (to the race).

"She's obviously a really good runner. It's going to be such an amazing opportunity to race against her and so many other amazing runners. I'm just going to try my best. That's really all you can ask for. It's a tough field so I don't expect to go in there and do anything crazy."