A week prior, he had run 15:17 to win the AAA WPIAL Championship, shattering the Roadman Park course record of 15:41 set by Mount Lebanon's Patrick Anderson. On the Hershey Parkview course, some believed that he could dip under 15 minutes, and many - especially in western Pennsylvania - favored him to win the state title.

"I definitely felt like there was quite a bit of pressure on me," Griffith said. "After a couple solid performances, I kind of felt like it was almost expected of me to win."

The only person standing in Griffith's way was Hatboro Horsham senior Brian DiCola, whose 14:43 performance from the Paul Short Invitational in September gave him the second-fastest 5k in Pennsylvania cross country history. Although Griffith had not raced against Dicola, his speed rating of 197 (calculated by TullyRunners) from his 15:17 performance equaled a projected time under 14:30 at the 2022 Paul Short Race, giving him a theoretical edge over the PIAA District 1 champion.

Watch Highlights from the 3A State Championship

Through the first mile, he held a commanding lead, but that position quickly faded. DiCola made up substantial ground during the second mile, and by the end, he cruised to the state title, beating Griffith by 11 seconds and setting a course record in the process.

"I had told myself that he was going to beat me if it came down to a kick," Griffith said. "I don't regret going out that fast [in the first mile]... I think I just gave up on myself halfway through."

Although a disappointing result, Griffith described the race as a learning experience, helping him realize that there was still a long way to the top.

But just three weeks later, Griffith used the same race strategy at the Champs Sports Northeast Regional - but this time, he won the race. He unleashed a tremendous kick at the finish, beating the Massachusetts State Championship runner-up, Samuel Burgess, and Brian DiCola (who finished in fifth). His 15:20 carried him to victory over some of the best runners in the region.

"I knew I wanted to get out hard like I normally do," Griffith said. "Going into the woods, I was feeling pretty confident... on the last kick, I just had it in me." 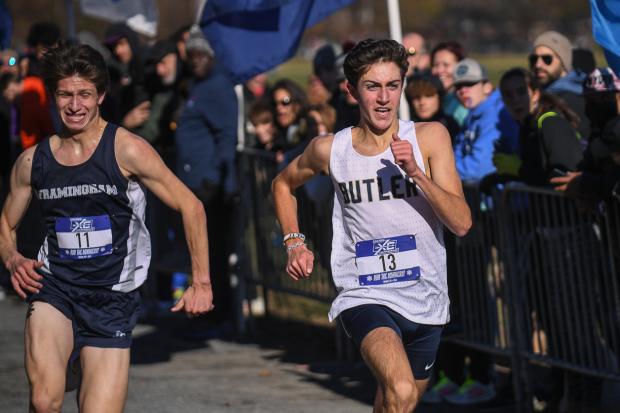 Griffith powering to the front at Champs - Tom Smith

With a dominating performance at a major regional meet, Griffith certainly found individual glory, but he also joined DiCola as the standard for elite running in Pennsylvania - a state looking to find respect in a sport traditionally dominated by California, Colorado and other western states. Four other Pennsylvania runners - DiCola, Ryan Pajak (Ringgold), Colin Whitaker (Lampeter Strasburg), and TJ Roden (Central Dauphin) - punched their tickets to the National Championship in San Diego, solidifying a stellar day for the Keystone State.

Of course, it makes sense now that Griffith would be the one to headline that group at Champs, but two years ago, he was completely off the radar. As freshmen, DiCola, Pajak, Whitaker and Roden all had personal bests under 16:30 and finished in the top 60 at the PIAA Championship. Meanwhile, Griffith was plagued by injuries and sat at a measly 21:10, miles behind his well-established counterparts. Unlike every other star in this year's MileSplit National Cross Country rankings, Griffith started with almost zero recognition.

Following the 2020 campaign, Griffith was ranked 556th amongst the Pennsylvania class of 2024.

Of course, that only makes his rise to stardom more compelling.

Griffith started running in sixth grade, competing casually in local races. Butler coach Rick Davanzati remembers seeing him run at a track meet when he was young, and he was impressed.

"I saw this little kid running that just seemed so smooth as he sort of glided around the track," Davanzati said. "You could tell just by the way he ran that he had a huge aerobic engine."

Unfortunately, it would take him a while to build that engine. Towards the end of middle school, he suffered from plantar fasciitis and his struggles continued into freshman year, as "growing pains," including tendonitis and osgood-schlatter disease, halted his progress. His only official result from the year was his 21:10 performance at the Red, White and Blue Invitational, which earned him a 31st place finish in the junior varsity race.

In the winter of that year, Griffith enjoyed mixed success in another sport: swimming. He achieved some impressive times as a freshman, but he missed qualifying for the WPIAL championships by just one spot, which changed his mindset going into the spring.

"I wanted to go out and prove myself in something," Griffith said. "It hurt a lot to miss that meet, so I went out to track and started to find my groove."

Griffith, slowly but surely, started turning his efforts in running into results. In April, he placed 13th in the 3200 meter run at the TSTCA Outdoor Championship meet with a time of 10:33.

There was also a bit of luck on Griffith's side - his coach, who has been in the sport for decades, has coached three separate WPIAL individual champions since 2017.

One of those champions, CJ Singleton, was also Griffith's teammate for two years, another helpful stroke of luck. Griffith describes Singleton as a mentor and "older brother," someone who helped him become who he is today. For his own part, Singleton recognized Griffith's talent right away.

"He has a work ethic and will to win at whatever he does, I had never seen that in someone before," Singleton said. "I wanted to take him under my wing so he could see the potential I saw in him."

Singleton recalls a workout from their first season together that showed him a glimpse of that potential. On a snowy Saturday morning, he and Griffith showed up to an optional practice to perform mile repeats. At the time, Griffith had been coming off an injury and hadn't run much since the fall, but he was still able to run his repeats in around 5:30, which impressed Singleton.

"I could just tell that if he could hit that type of workout having not run since cross country and was willing to show up to a non-mandatory practice in the freezing cold, he was going to be a generational talent," Singleton said.

He and Griffith trained together through the spring and summer, as the latter built his mileage to about 50 miles per week. The two developed a close friendship, but they also quickly became one of the most dynamic tandems in Pennsylvania.

On Sept. 4, 2021, Singleton won the AAA race at the 49th Marty Uher Invitational, and Griffith took third in 16:46, improving upon his personal best from freshman year by nearly five minutes.

"I had no idea I was in that kind of shape," Griffith said. "That was really a breakout race for me."

Later that season, Griffith had another career-defining moment, or at least one ripe with foreshadowing. Days before the TSTCA Cross Country Championship on Oct. 21, Singleton was ravaged with illness. He was still able to lead through the majority of the race, but towards the end, Griffith noticed him fading, and was quickly faced with a decision.

Would he back off as well, letting Singleton cruise to the victory? Or would he race onwards, leaving his "older brother" in the dust? Almost out of sheer respect, he chose the latter.

"I didn't even want to pass him," Griffith said. "He's probably the greatest mentor I've ever had in the sport, and I didn't want to beat him."

Singleton wouldn't let him choose that route, though. With about half a mile left, he waved his hand to Griffith, telling him to pass him and take the victory, which he did with a time of 16:13.

Over the course of his rather incredible year, Griffith went from being nearly unheard of to becoming a household name in Pennsylvania, eventually taking second place to his teammate at the PIAA Championships in November. He still describes his race at the state meet as a surreal experience; in the days prior, he only expected himself to place around the top 30, but he was able to cross the line just two seconds after Singleton, giving him a big embrace at the finish line. "[I loved] being able to share that moment with him," Griffith said. "It's so special to get second at the state meet, and to do it behind your teammate, who has been your main motivation for running for a year - that was just really special."

In the winter, he found continued success, although he struggled with injuries due to his efforts to continue swimming. When Butler won the distance medley relay at the PTFCA Indoor Track Championships the following season, he recalls laying on the ground, crying from sciatic nerve pain.

His outdoor season was more successful, though - he returned to health, and he ran 4:16 in the 1600 and 9:04 in the 3200, capturing 4th place at the PIAA Track and Field Championships for the latter.

In the summer, Singleton left for Notre Dame, leaving Griffith by himself for the 2022 season. He raised his mileage to about 60 per week, and towards the end of the summer, his workouts became increasingly fast, which gave him encouragement for the season.

On Sept. 3, he followed in the footsteps of his teammate, winning the Marty Uher Invitational in a time of 16:05 - faster than Singleton's best effort on the Roadman Park course.

"We just trained through that meet because it's obviously pretty early in the season," Griffith said. "But I ended up almost breaking 16, and I was just like, 'Wow, I'm at that level now.'"

He had already broken Patrick Anderson's course record with his time of 15:32 from the TSTCA meet; however, his 15:17 performance just a week later was one of the most impressive efforts of the season.

"I wanted to smash that record again and really see what I could run," Griffith said. "I kind of eased off with about a half mile left, and I was just kind of cruising, but then I rounded that corner and I saw 14, and that's when my mind just kind of melted. I found it crazy to see 14 on the clock at that course."

Griffith also gained some national attention from his performance.

"That race was a huge confidence booster," Griffith said. "Everyone was talking about it, and I saw my name on national rankings, and that just blew my mind."

Griffith is currently ranked 15th on MileSplit's latest national rankings, and he could rise further after future performances. He holds the second highest rank of any Pennsylvania runner, one spot behind DiCola - and he feels the state as a whole is incredibly strong.

"There have been a lot of Pennsylvania guys this year that have hit some crazy times," Griffith said. "I think we've done a really good job putting Pennsylvania on the map, and I think people are starting to realize that we've got some serious threats."

Griffith will try to further his state's excellence at the Champs Sports National Championship in San Diego, where he will face off against elite runners like Rocky Hansen (ranked sixth nationally) and Hunter Jones (ranked first nationally). The course is somewhat hilly, which he plays to his strengths as a Western Pennsylvania runner, but he will have to prove himself nonetheless.

"The national rankings, it's cool to be put on there, but I haven't gotten the chance to race any of these other nationally ranked guys," Griffith said. "I have to go out there and do what they say I can do. I want to make a statement to some of these guys that I haven't raced yet."

After years of injuries, sudden breakout performances, and drastic underestimation, Drew Griffith has finally risen to the status of a champion.

On Saturday, he'll have the chance to prove it.