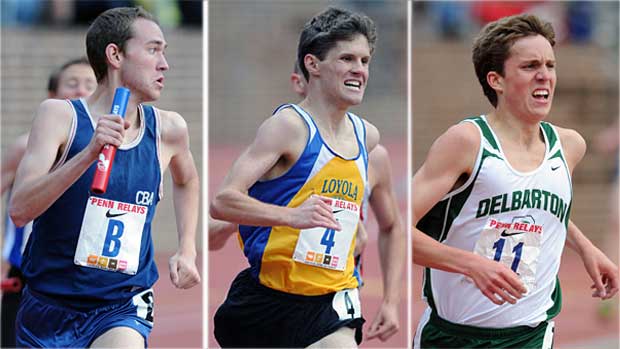 PHILADELPHIA, Pa. – Dan Mykityshyn said that it was the kind of thing that a runner stays up at night and dreams about.

Ok, ignore the fact that you can’t stay awake and dream at the same time. The point is the moment felt like a dream. Christian Brothers Academy (N.J.) won the Distance Medley Relay Championship of America at Penn Relays in 10 minutes, 13.04 seconds while its entire team took over a section of the stands and went nuts on the back straight at Franklin Field.

“It was surreal,” Mykityshyn said.

CBA had been leading nearly the whole race until Central Bucks South (Pa.) anchor Austin Gregor challenged Mike Mazzacaro with two laps remaining.  Mazzacaro moved at the bell. Gregor pushed again with 300 left but Mazzacaro blitzed the last 150 and put the race away. Central Bucks finished second in 10 minutes, 15.46 seconds. Mykityshyn had little doubt that his dream would have a happy ending once he handed off to Maazacaro.

“It was just him and one other guy,” Mykityshyn said. “That’s what he does. I want it in Mazz’s hands.”

Mazzacaro is still learning. That’s what he said. Even while his senior year is sprinting toward the finish. He learned an important lesson when he was outkicked on the anchor leg of the DMR at the indoor national championships.

CBA’s time is the eighth-best in the country this season and more than 10 seconds slower than they ran at indoor nationals (10:02.99). Mazzacarro said his team didn’t care about the team. No one did. He said Penn Relays was about winning.

“I wasn’t going to go home without winning,” he said. “Not on the bus anyway.”

Of special note: St. Benedict’s Edward Cheserek was in 16th place when he took the baton for the anchor leg. He moved up to sixth after 600 meters and his incredible 4:05.76 anchor landed his team in fifth, finishing in 10 minutes, 22.42 seconds.

“I just wanted to focus on myself, as usual, keep working on fixing the little things,” the Virginia-bound Vena said. “I was happy to come out here and get a win. This is such a historic meet. Now I’ll go back home and go back to work.”

Vena won the shot put by more than seven feet. It wasn’t quite as easy for Matt Jablonski of Loyola Blakefield (Md.) in the mile. The senior was in fourth at the bell lap when Chad Noelle of Greene (N.Y.) made a strong surge from fifth and jumped to the front.


With 300 left, Noelle was breaking away but Jablonski refused to let him go.

“Everyone was making moves,” Jablonski said. “I was just trying to cover them all. I almost wanted to give up but I felt like I was right there.”

And the longer he held on the more confidence he built. Jablonski moved again off the last curve. Noelle felt him coming and made a mistake by peaking over his left shoulder. Jablonski was on the outside on Noelle’s right. It was enough to give Jablonski a step and the win in 4:10.37. Noelle, who edged Jablonski in similar fashion at the Millrose Games indoors, finished in 4:10.38. They’ll be teammates at Oregon next year.

“I think I surprised him a little bit,” Jablonski said. “It’s nice that we’re building a little rivalry. He’ll be a great training partner next year.”

Morgan Pearson of Delbarton (N.J.) chose to decide his race much earlier. He made a move with more than two laps to go that no one could handle. The senior, who signed with Duke, won in 8:23.34. Martin Hehir of Washingtonville (N.Y.) was second in 8:25.64.

“I saw a gap opening and I figured that it was my time to go,” Pearson said. “I didn’t want it to come down to a kick. I wanted to go somewhere between 700 and 1000 meters to go so it worked out.”

“All he told me was, ‘Risk it for the biscuit,’” Pearson said.

Carisma Lyday, Melia Cox, Traci Hicks and Akawkaw Ndipagbor put on a display of baton exchanging that would make Team USA blush. They upset a field full of Jamaica’s top sprinters to claim the girls 4x100 Championship of America in 45.23, the fastest time in the United States this season.

The win was extra special for Ndipagbor, who dropped the stick on her exchange with Hicks last year. This time she was mobbed at the finish line and essentially body slammed by Lyday.

“I can’t even describe it,” said Ndipagbor, who was near tears when she crossed the finish. “The baton did not stop at all.”