My name is Dustin Wilson and I just returned from Foot Locker nationals last weekend. I’ve been running for the last six years and since my freshman year making Foot Locker Nationals has been a goal of mine. I’ve always considered myself a longer distance runner; even as a freshman, cross country nationals just seemed like a much more elaborate experience than any track meet I’d be able to go to in high school. First , it was in sunny San Diego and it would be a nice escape from December in Philadelphia. Second, It was the highest level of competition I could reasonably aspire to reach (the last few years have made me realize my cross country career will continue past Foot Locker). Foot Locker completely lived up to my expectations.

My sophomore year I tried to rationalize a way that I might possibly make nationals, but I knew that it was unlikely. The summer before my junior year I still had Foot Locker on my mind, but a stress reaction derailed my plans. I distinctly remember aqua jogging for up to two hours a day and the only thing that kept me focused was thinking of the possibility of making it to San Diego. After a 17th place finish at the regional as a junior I was certain that senior year I would make it.  This year, I not only set out to make it to San Diego, but to place in the top 15. Going into regionals I was fairly confident I’d qualify but I was focused on running a good race. After a 5th place finish it took me a few days for it to sink in (The paperwork helped it sink in), but I still knew I had work to do in my senior season.

Upon arrival in San Diego on Thursday afternoon I saw four people whom I recognized as runners. Turns out they were all from the south and were on the same flight with me from Salt Lake. City.  I listened to Ahmed Bile talk about his experiences at this meet last year, and from his glowing praise of the weekend, I was even more optimistic about the experience.

After about ten minutes of waiting by baggage claim a tour bus pulls up. We’re shuffled in, and taken through San Diego and to the island of Coronado. The grass actually is greener in Coronado, in case anyone was wondering. Within minutes of setting foot on Coronado I was given a bag of Saucony and Foot Locker gear. It was a warm welcome.  I made my way up to my room, met my roommate, Connor Rog, whom I knew from racing, but not too well personally. In the next two hours or so we ran into most of the Northeast team, explored the hotel and the beach, and just enjoyed the Del in general. Thursday night was capped off with a dinner (all part of the warm Foot Locker welcome) and gave me a chance to meet more runners from across the country. We broke up into teams and had a scavenger hunt that I’m convinced we would’ve won if Twitter worked on just one of our team member’s phones. 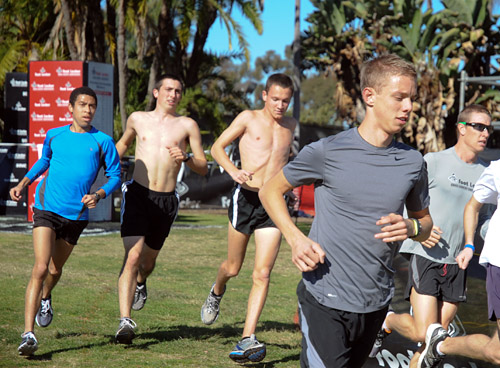 After a breakfast in the hotel, which was great, we went out to the course for the first time. I was surprised by how difficult the course was with the exception of the Upas street hills.  The Upas Street Hills were a little exaggerated, while the rest of the course proved to be more of a threat than other people made it seem. I was surprised by the heat, but it was San Diego after all, and my legs were still a little tired from the flight. I was hoping for cooler temperatures and a good night’s sleep Friday night so I could be at my best the next morning. I was also shocked to see some of my competitors doing hard strides uphill and putting on spikes  and taking runouts from the start.  I suppose everyone has a routine. It got them here after all.

We went back to the hotel and spent a few hours relaxing and meeting more runners. We went to dinner at the hotel, met with some of the elite athletes.  Jorge Torres, Ben True, and Bobby Curtis were some of the nicest people I met, they were willing to give advice on there experiences, the course, their careers, and training. Bobby Curtis even signed the back of my race bib. I think he thought I was going to Villanova. We had a conversation about a former teammate of mine at Nova and he signed the bib “Bobby Curtis- GO NOVA!”. I didn’t have the heart to tell him I wasn’t going to be a Wildcat. I went to bed as soon as I could and started prepping for race day. As I went to bed I thought about how great the weekend had been thus far, and I was a little taken aback by the fact  that I had to run a major race the next morning. 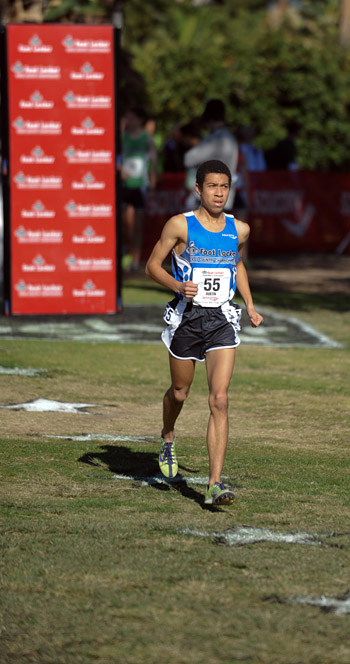 I had been trying to avoid the rankings and predications since I qualified. I was focused solely on running my own race. Unfortunately, I found out the morning of the race that according to Dyestat I was selected to finish 15th; my roommate was selected to finish 16th.  We had a good laugh about it and went to grab an early breakfast. I tried to eat a bagel and a banana to start off , but I struggled getting either down. This didn’t bode well for my race. I went back up to the room and did some stretching. We boarded the bus an hour later. The jovial attitude I had become accustomed to during the weekend had completely disappeared. Everyone was petrified on the way to Balboa. I passed out on the bus and didn’t wake up until I heard people leaving the bus. I thought I had gotten a good night’s sleep, but I guess not. This didn’t help my nerves. We sat in the Foot Locker tent and let the girls warm up. I made a conscious decision to turn off my phone and visualize the race during the hour before we warmed up. Unfortunately, this was interrupted by constant trips to the restroom. Again, my nerves were far from under control.

I looked around and realized my friends and teammates were just as nervous. I wasn’t alone in this sentiment. I don’t think any of us were afraid of the race itself, but the anticipation was killing us. We kept changing the time we’d warmup. At some point it got a little absurd. 9:00 or 9:05? The girls race went off. I got distracted a little watching Finn and Seidel go back and forth. That race was one of the most beautiful things I’ve ever seen. It was probably for the best. Seeing someone run the course helped relive some of the nerves. After changing into my uniform and being introduced the nerves vanished . With ten minutes to race time I was completely in control. I knew exactly what I needed to do. As an added bonus, while I was listening to the credentials  of some of my competitors my confidence mysteriously skyrocketed. “Only 8:56 for 3200m? pshh, that’s not that much faster than me. I’ll be fine. He ran 4:16 for 1600m, I can do that too, I shouldn’t worry about him.  Oh, he ran 15:40 at NXN last week …that course didn’t look too tough.”. I started to remember that I had planned on peaking for this race since August. I didn’t worry about a state meet, a league meet, and I didn’t run to my potential at regionals. A confidence came over me; this was going to be my race.

Wilson is in position at two miles - Photo by Don Rich 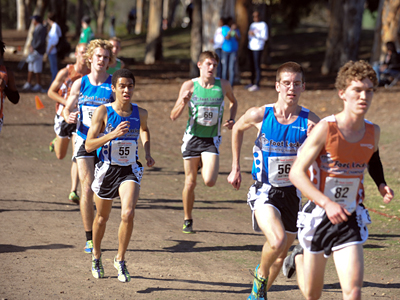 Gun goes off. Straight to the middle of the pack, be sure to keep contact, and don’t get spiked. One, two…probably about 25 guys ahead of me.  By 400m we hit the dirt trails. Neither my coach nor I anticipated that 25 of the best guys in the country would be kicking dirt into my face for that stretch. It was a minor inconvenience. First hill, it’s a little tight, but I squeeze by a few people. I don’t remember anything until the mile. 4:55-4:56 , not bad, about where I need to be from a time perspective. But this is cross country and time really wouldn’t mean a thing If I didn’t gain a few spots. Up Upas the first time and I pass three runners. Throughout the race I hardly heard the announcer, but at around 1.5 miles I heard him update us on Cheserek, Futsum and Alberston (the early leader). I did however, hear someone yelling “sixteen” to the runner in front of me. This reminded me there was still work to do. A quick glance over my shoulder reminds me there are still at least five runners right behind me. I wasn’t comfortable in 17th place. I started to doubt if I had enough left in the tank as we approached the second part of the figure eight.  Up Upas again. It was tougher the second time, but not nearly as bad for me as some of the other athletes. I ran Sunken Meadow, and Belmont, and this hill pales in comparison. I took a few more spots. Fifteen. I still saw blue jerseys ahead of me. I was convinced that among all of us from the Northeast Matt Mcclintok and I were the “cross country runners”. I keyed off of him the second time up the hill and primed my final move. I was instructed to run “the hardest downhill of my life” down Upas. I had never practiced hard downhill running, nor had I casually run down a hill as steep as Upas, So I decided to wing it. I flung myself down the hill with reckless abandon. I passed four or five runners.  I was rather proud of myself despite the fact I stumbled at the bottom. For a split second I thought I’d trip. I made it across the road the final time and onto the last uphill before the finish.  Coach Hines was standing about 300m from the finish. Manic, I think he was yelling , “Nine! Arms! Arms! Arms!”. I lost 4 spots in the final 60m. It was good enough, we expected me to lose a few spots, but I was fairly certain I had finished in the top 15.

It was confirmed. 13th.  3rd team all American. This is what I’ve wanted for years. We cooled down. We went back to the hotel. It wasn’t until I got back that I realized it was only noon. We had a whole afternoon and night to enjoy ourselves in Coronado. Most of the afternoon was spent by the pool and ocean. The banquet was just another example of Foot Locker pampering the athletes, coaches and parents. The beef served was the most tender I’ve ever had, and the other three courses were pretty good too. After the awards we spent the night hanging out with our new friends. I made it to bed by 2:30. I was up by 3:15 to pack.  As we left San Diego there was the demoralizing feeling of returning to the real world.  I enjoyed the weekend so much, and can honestly say I’m envious of the underclassmen who made it and have another chance at making the trip again next December. For now, I’m running base mileage. I’ll be making my indoor debut at Burdette in the 3k. I’ve been told that the major collegiate meets are similar to Foot Locker; I can only hope this is true.