In the sport of track and field, it's not that difficult to totally forget about the concept of a team. Most of the accolades go to the individual competitors who happen to wear the singlet of the high school they attend. Beyond the coaches, no one else really gets the proper amount of credit for the success of an athlete or program. But in Philadelphia, we have a team that is achieving success, and everyone has a role in it.

Swenson Arts and Technology is a Philadelphia Public School that has had some very strong girls teams in the past five seasons, winning one indoor state championship and three outdoor AA state titles. This year, the boys are making some noise as well. 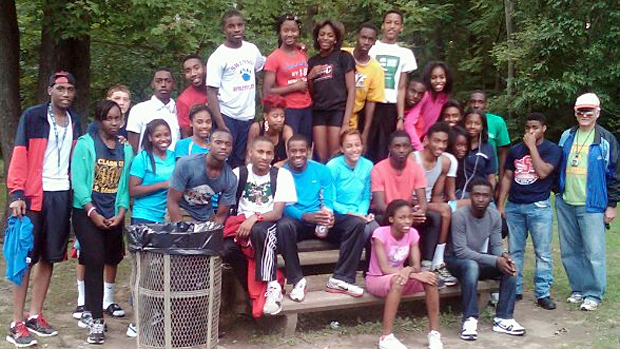 The 2011-2012 version of the Lady Lions look to be stronger than ever, but for this group, there is a good mix of veteran leadership and young talent. Head coach Dean Lent has credited his veterans for being able to provide leadership for his young and new girls who thus far have had great seasons.

"Imani Harris, Shanae Gee, Amani Nesmith and Amy Hicks work hard at practice. They set a good example for the others to follow. They have matured both as athletes and as people. They understand the hard work it takes at practice to be successful and they give 100%." said Lent. "They set a good example for the younger girls on the team. They lead by example and support and encourage the younger runners."

The guidance of the upperclassmen has allowed the freshmen and newcomers to perform without any extra pressure. One of the bright new stars in PA has been freshman Markeeta Thomas, sister of West Catholic alum and NCAA Champion at LSU Latavia Thomas. Markeeta is currently PA#2 in the 60 meter hurdles (9.18) and the 400 meter dash (57.08), and PA#6 in the 200 meter dash (25.86). She is also a member of their US#3 4x400 meter relay and US#5 4x200 meter relay teams. Another newcomer who has become a contributor to the cause is junior Tichina Rhodes. Rhodes is PA#6 in the 400 meter dash (58.61), but has also competed in some field events such as the high jump and the triple jump. Even with their success, the upperclassmen have kept the concept of team in perspective.

"This is a very tight team, both the girls and boys teams. They are not just teammates, but friends, both on and off the track. Getting the freshmen and upperclassman to be on the same page is made easier by reminding them that we are on the same team. We can compete against each other and strive to be better than the other, but we cannot allow this competition to destroy the team," said the head coach.

Beyond their leadership, the veteran foursome have been strong contributors to the title run on the track. Imani Harris and Amani Nesmith are top eight PA performers in the 200 meter dash, Nesmith is PA#8 in the 60 meter dash and is PA#6 in the triple jump. Harris is PA#5 in the 400 meter dash as well (58.34). Amy Hicks has become a top five hurdler, running a PA#4 time of 9.33 in the 60 meter hurdles this season. Shanae Gee has joined the other upperclassmen and Thomas on their nationally ranked relays and has run 59.40 for 400 meters this season.

While the success of the girls program has been well documented for much of the 2000s, the boys have made their own noise in the past year.

The Swenson boys track and field team has a different dynamic compared to the girls team. While the girls do track and only track, the boys also take their talents to the basketball court. Several members of the track team are starters on the basketball team. The balance of the two sports is something coach Lent has had to adjust to since he first became the head coach.

"Some would compete during the season but most would wait until after basketball ended to start running. Last year, several of the basketball players ran cross country in order to get in shape for the upcoming basketball season," said Lent. "I told them if they took cross country seriously and gave me any time during the winter (days when they didn't have practice etc.) that I would take them to indoor meets. They accepted and we ran some indoor meets in the area and in New York."

This system has required the boys to have to do a lot of their training on their own and then attend some meets in between their demanding basketball schedule. Two members of the basketball team, Haneef and Jay Hardy had previous track experience before Swenson. The other members of the team decided to tag along with the two brothers. Their first accomplishment on the track was qualifying for states in the 4x200 last winter, a goal achieved that motivated the group to qualify for the outdoor state meet. Somewhere on the way to Shippensburg, some real star power broke out, and the boys began to make their mark on the PA map.

At the Abington Invitational last April, Haneef Hardy entered the 800 meter run and came away with a win in a huge personal best of 1:55.39, a state leading performance at the time. At the end of the meet, their 4x400 meter relay ran 3:25.15, their best of the season on their way to qualifying for states. Coach Lent credits their close friendship on and off the track and the basketball court for their early success.

"The boys team is a tight knit group and they constantly challenged each other at practice and meets and they started to get better," said Lent. "Finding balance is not easy. During the winter, track is the second sport. The base they got during cross country has proven invaluable. When they come to practice they work very hard, and it's the same at meets."

While coach Lent has been the head coach, he has had a PA legend by his side assisting him with this group. Tim Hickey has been an assistant coach for the past four seasons and not only does he have a connection with the athletes on the track, he also connected to the team away from the sport. Several of his current athletes have had their mothers coached by him earlier in his career. That connection, along with his many years of experience, has been a big part of the team's success.

"Tim's experience with high school kids and all the success he's had has been a blessing to me and this team," said Lent. "I have learned a lot from him. He has spent his life coaching and teaching student athletes in the Philadelphia area."

It's the extra energy that comes from everyone that helps this team move forward. From the veterans on the team guiding the freshmen, to the freshmen contributing on the track, to the veterans getting friends to join the team, to the new guys contributing on the track and motivating each other to be at their very best, to the coaches guiding everyone in the right direction, to even the coaches meeting the team at a local McDonald's to get in a van and go to a meet.

In a sport where the concept of team is easily forgotten, this is all they know.