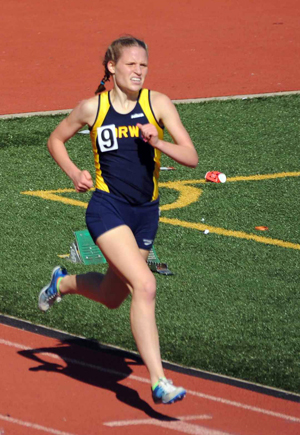 What was your most memorable race/competition?
My most memorable competition was WPIAL team finals my sophomore year for cross country.  It was an amazing feeling coming home on that bus ride knowing I had helped my team to its first WPIAL team title, and the energy was amazing.  It is always fun to be on a team with so many girls focused on one thing, and it is even better when everything pans out.  It was doubly exciting because one of my best friends Jenna Gigliotti had won individually, and being able to share in that joy as well was amazing. 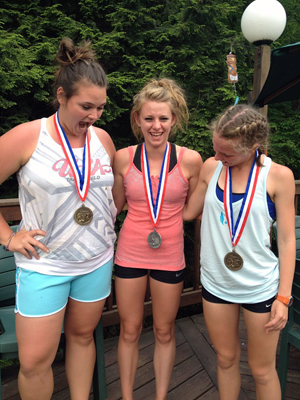 Where did you face your biggest competition?
I believe I faced my biggest competition at the state meet each year.  Although the events change depending on the year and season, the caliber of talent never really does.  Everyone who runs at the PIAA Championships- be it for track or XC- is an amazing athlete, and they are all fighters who are either gunning for a medal or PR, so the competition is never less than fierce.

Out of all of your high school accomplishments, which stands out the most?
Winning the WPIAL 1600m and setting a PR, school record, and WPIAL meet record all in one race is definitely what stands out the most.  It was extremely surreal to walk off the track knowing I had done what I had set out to accomplish way back when I began training in the summer and set all of my running goals for my senior season.  It was also so great to know I had finally crossed the five minute barrier, and I finally gained confidence in my abilities as an athlete.

If you could do it all over again, what would you change about your athletic career in high school?
If I did my high school career all over again, I really think I would have tried a little harder as an underclassman.  I always wanted to do my best, but I never quite realized all of the effort that had to go into getting better until I was a senior.  I wish I had been mature enough to realize I could have worked harder a lot sooner.

What were the most difficult obstacles you had to overcome?
The most difficult obstacle for me was my own mind.  I truly believe I am my own worst critic when it comes to anything, and for the longest time I really thought I didn't deserve to do well for whatever reason.  I think to succeed in anything the first step is to believe in ones self...all I had to do to begin improving was to start believing.

What will you miss the most?
Obviously, I'll miss the people the most.  My coaches have taught me a lot about running and life in general, and the friends I have made both on my team and on other teams are some of the coolest people in the world.  Runners in general are some of the sweetest people, and the thought I won't get to practice and compete with the same people in the same atmosphere any more is bittersweet. 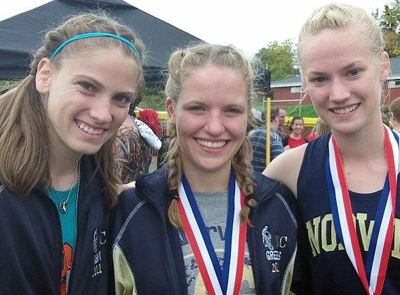 Do you have any advice for younger athletes?
Believe in your abilities, and never let anyone tell you that you can't be great.  The vast majority of people have to struggle and fall before they can taste success, and only a small amount of people will come into the game with stellar abilities.  If you don't start your high school career as the number one runner on your team that doesn't mean you won't be someday...and quite truthfully, if you aren't the best then you have something to work towards which makes the journey all the more interesting, and success all the sweeter when it is achieved.  Never give up!

How have your coaches influenced your performances and your life goals overall?
My coaches always have pushed me to get out of my own head and just race.  They learned pretty early on that paying attention to splits and numbers was confusing to me when I was trying to focus on breathing and racing, so they adapted to getting me to focus on people and passing.  They taught me to be a racer more so than a runner, and played to my competitive spirit which has helped me to improve and keep loving to run/race.  My coaches also influenced me to continue running in college. I probably would not have had the confidence to talk with a lot of the schools I did without their encouragement.

What are your college plans?
I plan to attend the United States Naval Academy in Annapolis, Maryland.  I leave on June 27th, and will be sworn in as a Plebe on the 28th.  Being that I'm a recruit, I will continue to race for the Midshipmen in cross country and both indoor and outdoor track...I'm blessed and extremely excited to be able to chase my dreams of becoming a Naval Officer while still competing in the sports I love. 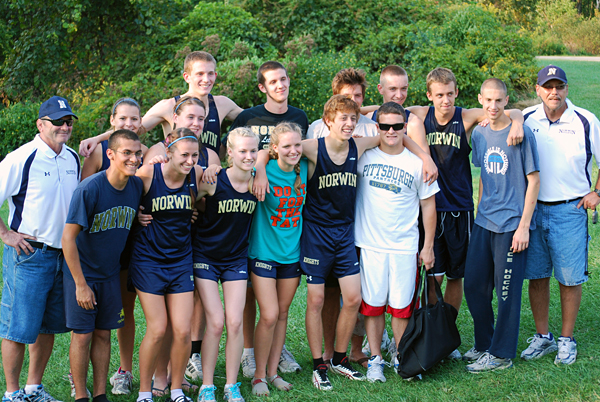 Shout-Outs?
To my Norwin Knights teammates: Thank you for always being there and putting up with me.  I know "relay Autumn" wasn't always the most pleasant person to be around (sorry Abby!), and I can't thank you all enough for everything you have done.

To Ryan Boccabella, Tim Flynn, and Jenna Kuhn: I have vented to you guys about literally everything!  None of you ever complained, and even if I said the wrong stuff sometimes you continued to run with me and stay my truest, dearest friends.

To my parents:  Thanks for allowing me to make my own decisions.  You never pressured me to be a runner, and you never put extra pressures on me because you knew I am always hard on myself.  I realize now that you weren't neglecting me, but you were letting me be my own person...you guys are seriously cool!

To Phoebe, Jerome, and Iain (my siblings):  I would never have been as tough and spunky if it had not been for you.  Phoebe, I got my crazy streak from you, and to the boys...thank you for allowing me to be fearless in a safe environment.  You are my big-brother-body-guards that never let anything bad happen to me, and looking back I do appreciate being protected.

Lastly, I should thank all of my coaches (Tray, Henry, Fleck, and Morgan):  All of you have different styles and different ideas of what makes a great athlete, but you all agree on one thing it seems like; hard work is what makes someone.  Coach Tray, thank you for your unwavering support and can-do attitude as well as making sure I never became a cheerleader!!  Coach Henry, thank you for making cross country so hilarious, and for sparking my love for track as the middle school coach.  Fleck, thanks for adopting me into the distance program for track this year and helping me train.  Also, thank you for never pressuring me and always telling me that I didn't have to prove anything when I ran.  And last of all, to Coach Morgan...thanks for never letting me be satisfied, and teaching me that even the impossible can be done. You never care if something is logical, you just decide it is doable no matter what the odds are, and I have adopted this from you.

To everyone who has been a part of my track and cross country careers so far, you have shaped me tremendously in your own ways...each and every one of you.  I hope I have been able to positively influence you even an ounce as much as you all have influenced me.