Another former soccer player finds success running hills and on ovals. And a state championship. Hatboro-Horsham senior Conner Quinn has had the most success in his high school running career on the cross country course. Benefiting from a strong team, he raced the state course at Hershey as a freshman and sophomore, finishing in the medals as a 10th grader in 20th place. As a junior, he became the second harrier in school history to win the AAA state title. The first, not coincidentally, since his cross country coach Russ Coleman did it for Hatboro in 1994. Conner hopes to become only the third repeat winner in the past 46 years. But that's not his only big goal this season. 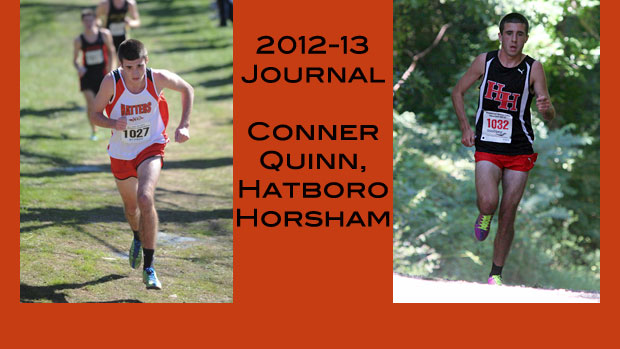 My name is Conner Quinn and I am a senior at Hatboro-Horsham high school. When I was asked to write a journal for PennTrack I was very excited and I thought it was an honor. Growing up I saw all of the top athletes in the state write these. I thought I would tell you how I became introduced to running and the story of how I came to run in high school.

Growing up I was always a soccer player and I always thought that soccer was going to be the sport I played all throughout high school. When 8th grade came around I decided to run track for my middle school to stay in shape for soccer. When the season started I had no ambition and no drive. I was just going through the motions until my first race. After my first race I just drew to it. I just fell in love with the sport. But I still had no idea that I would ever run in high school until the day I met my former XC coach Mr. Ayton. He approached me and asked me if I wanted to run XC and of course I said yes.

When I got to high school a lot changed. Everything was so serious and much more dedicated. It was then that I decided I was fully committed so I quit soccer and ran full time. I ran everyday and I started to really see results. I finished 20th my sophomore year at XC states and my junior year I won.

Now being my senior year, I put in great miles in the summer. I got up to about 70 a week then went back down to about 60-65 and stayed there. I really feel that all this mileage will put me in great shape. The first two races I had were PTXC4 and Briarwood. PTXC4 was not how I planned my season would start out. It just was not my day and with the competition being so good I had to be my best that day, and I was not. When Briarwood came around I was excited to bounce back. Unfortunately I was not in the championship race with Brendan or Tony, but sometimes that is the way things are. But the division 1 boys varsity race is still very competitive and we get to see a lot of teams in our league. I felt much better that day and went on to win. I am very eager to run at Paul Short, which is the next invitational our team is competing at. After that we have Salesianum and then it is on to Championship season for us!