Hello everyone, I’m glad to be writing my second ever Penntrack Journal!  I just got done reading Austin Pondel’s entry and I am pretty sure I could have written a lot of it for him.  I only spent a few days with Austin and the other guys from the Northeast and I feel like I have been training with them for years.  Well, minus Edward Cheserek’s 60 mile runs.

It took me a good while after regionals before I fully got over qualifying for nationals.  After realizing that I would in fact have to run a race in San Diego, and not just hang out by the beach, I put a couple good weeks of training together.  Workouts were mainly intervals under a minute, equal or full recovery, with some downhill running mixed in.  For example one workout was :40 downhill (equal recovery), :60 flat (equal recovery) x8.

I failed to talk about any training at all in my first entry.  I got up around 60 miles per week in the summer, and then trained at 40-50 during the season.  Staple workouts for us are threshold runs between 4-7 miles, and 1k repeats.  We generally get a run 9-14 miles slow once a week.  All of this is in the summer and at the beginning of the season.  When championship season rolls around we cut it back as far as quantity goes; I have been running about 30 miles per week since states.  Compared to some of the runners you guys have read about, my training may not seem as intense.  It is nothing crazy, but it’s working out for sure and I haven’t been injured (everyone knock on wood).  I also think it allows me to be more consistent from race to race.  Mr. Berzonsky knows exactly what he is doing and every runner on the team trusts him fully.  The best training program is the program you believe in and I really feel that is the truth. 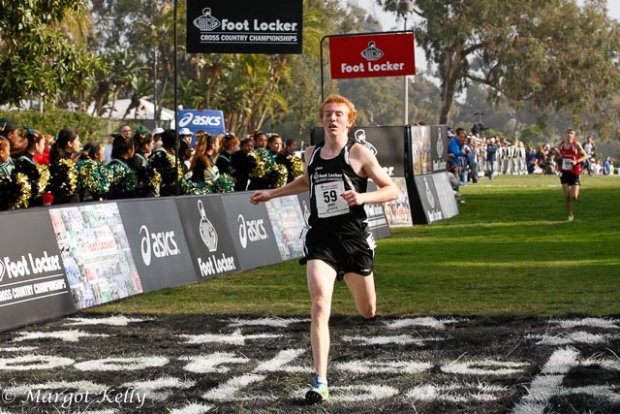 The 34th place finish at nationals was a letdown, but it was still the coolest race I have ever been a part of.  The 15 or so minutes leading up to the race was awesome.  I got to be announced and look like a fool on camera and run out in front of all the fans.  Being the second of 40 called, I got to stand on the line and listen to each runner’s credentials: state records, All-Americans, national champions!  For some reason I wasn’t intimidated, but excited to just be in the same race as them.  I was mixing it up with the best around, and was 25th through the mile.  I fell back several spots up the hill the first time and never got back into it.  I still haven’t decided if I had a bad race, or if the 33 in front of me were just better.  They definitely deserved it.

Everything in San Diego was top notch, from the race, to the food, to the competition in the “sting pong” tournament.  The people are what it’s all about, though.  We were treated like celebrities.  Shawn Wilson from New Jersey wanted steak for breakfast, and sure enough he got it.  After the race, I barely stepped under the tent before my spikes were being untied for me.  Everyone involved at nationals deserves a big thank you.

Any ordinary runner can do great things.  I have realized this after my experience at Foot Locker; not one of the athletes I met, even Meb, is superhuman.  They are all just regular guys who decided not to set limits on their goals and on themselves.  If I can carry even part of this attitude with me I think I can be successful.  Hopefully this time next year, I’ll be writing about my return trip to San Diego with Kennedy Weisner, Regan Rome, and a host of other runners from PA who don’t like to play.


What a season.  I am truly honored to be part of such a historic year in PA cross country.  I know the purpose of this journal is to share my training and race experiences and things like that, but I could not begin without thanking my family and coaches, Mr. Berzonsky and Mr. Arabia, for their complete dedication to maximizing my success as a person and a runner.  Of course, a big thank you goes to my teammates for making running such a fun and enjoyable part of my life. 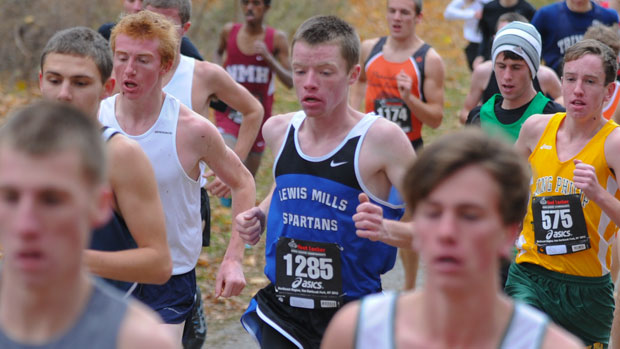 Our team set our sights on making it back to the state meet for the second year in a row.  Though we came up short, it would be impossible to view the year as a failure.  Our personal successes reflect the hard work from everyone top to bottom on the squad.  I was lucky enough to have a legitimate shot at winning every race I was in, losing to Vinny Todaro and Dan Jaskowak in some exciting races.  My friends Tyler Snider and Patrick Miller did come up big (like always) at WPIALs and joined me for states.  I carried my WPIAL win into Hershey with some confidence before having my hopes squandered by a CR from Tony Russell, a great guy by the way.  The finish was a bit of a letdown and I am for sure being hard on myself, but I do feel like there are a hundred other kids that deserve to be second in the state and I am not going to look past that accomplishment.


I headed into Foot Locker with some feelings of uncertainty.  A new course, new competition, even new socks (lost the racing socks).  Physically, after a long championship season, I felt sort of run-down.  But you don’t want to hear me complain and it wasn’t all negative, believe it or not.  I felt like I had a pretty good chance of making top ten with a smart race; my plan was to hang back through the flat first mile, then stay consistent through the woods. 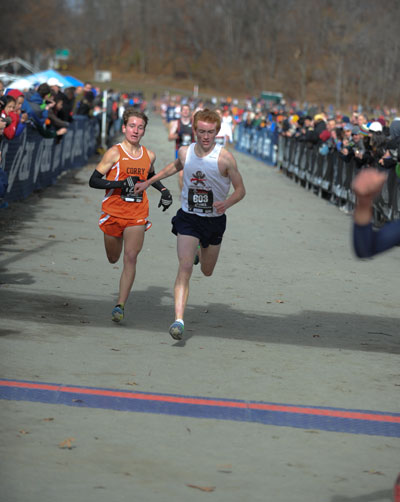 A few minutes before the race, Conner Quinn welcomed me to a spot on the line next to a swarm of fellow Pennsylvania runners, and I heard Brendan Shearn screaming his head off at the other end of the line, “PA don’t play!”  That really got me going and I was finally ready to run.  The race played out for me like I had hoped.  I went through the mile at 5 flat, moved my way into the top 20 by the two mile point, and then hammered the down hills to finish with Austin Pondell.  I made that sound pretty easy I guess, but I am looking forward to the yearlong break before hitting the hills at Van Cortlandt again.

Running for a team, in my opinion, is the most inspirational part of any cross country race.  Representing Pennsylvania at Regionals was an aspect of the race I hadn’t really thought about before.  It is so cool that I get to run for my state and the Northeast Region in San Diego next week.  I can’t wait to get these couple weeks of training going and see how I match up against 39 of the top runners in the country.

Finishing with Austin Pondel of Corry Area - in 9th and 10th, respectively