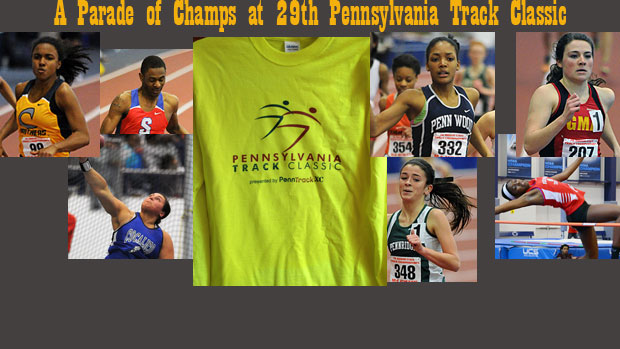 Indoor 200 meter champion Katelyn Jackson of Springside will be looking to pick up where she left off in February with a strong start. She will have plenty of company looking to chase her down and gain early season confidence. Natalia Pinkney and Taylor Chapman of Pennridge are coming off an All American performance in the 4x200 meter relay indoors and will be running both the 100 and 200 with Jackson. Swenson will also be in the mix with Amy Hicks and Jameela Muhammad competing in the 100 and Imani Harris-Quillen running the 200. The 400 meter dash will feature indoor state champion Caela Williams of Penn Wood and medalists Harris-Quillen and Brooklynn Broadwater of Springside. Emma Keenan of Gwynedd Mercy will start her campaign to win three outdoor 800 meter state titles in a row with a 400 meter dash against the state's best. Jamila Branch of Central Bucks West will also be another one to watch on Saturday.

Indoor mile champion Marissa Sheva of Pennridge will team up with her older sister Caitlyn in the 1600 meter run. Out to chase them down is 4x800 meter relay All Americans Elise Claffey, Sarah Kochinsky and Anna Willig of Great Valley. Meanwhile, Kara Steinke of Methacton and Paige Stoner of Pottsville will be going head to head in the 3200 meter run. Freshman Mady Clahane of Cumberland Valley will also be in the mix against the junior duo. In the 800 meter run, sub 2:15 runner Devon Towell of West Chester East will be the favorite to win the race in a field with runners looking to make a name for themselves in a big meet.

In the hurdles, the Cheltenham duo of indoor champion Kayla Coley and 4th place Ciara Leonard will look to secure a 1-2 finish in both hurdle events. Swenson will also be on the line challenging the duo like they did at the indoor state meet with Amy Hicks, Tichina Rhodes and Markeeta Thomas looking to break up the 1-2 Cheltenham punch. Sydney Jacques of North Penn will also compete in both hurdles and Gina Lupica of Villa Joseph Marie will also be in the mix in the 100 meter hurdles.

In the relays, Swenson will start their state title defense in the 4x100 meter relay, where Norristown, Cheltenham and Penn Wood will be their toughest challengers to an early season win. That challenging trio will also go head to head in the 4x400 meter relay with Pennridge and Central Bucks West lying in wait. The 4x800 meter relay will have indoor #1 and All Americans Great Valley taking on CB West, Methacton, Pennridge and 4xMile All Americans Germantown Friends. GFS will also be competing in the distance medley relay against CB West and North Penn.

In the jumps, indoor national champion Cyre Virgo of Fleetwood Area will be traveling east to take on familiar foes like fellow All American Megan McCloskey of Germantown Academy and Kelley Anne Stuetz of Cheltenham. Kristin Beatty of Methacton enters the pole vault having cleared 11 feet and is only one of 3 vaulters who have cleared 10 feet in their careers. Julia Reeves of Springside came on strong towards the end of the indoor season in the long jump and will look to continue that momentum. Sydnee Jacques of North Penn will look to show her strength in the jumping events, especially in the triple jump. Nicollette Serratore of Methacton will challenge in both events and Alexandra Heuer of Boyertown will be in the mix in the triple jump.

In the throws, US#1 Sarah Firestone of Mercersburg Academy will look to improve on her 152-1 mark from the opening weekend. PA has had at least one US#1 thrower in each of the past four seasons. Elizabeth Forcellini of Gwynedd-Mercy Academy will be looking to break the 40 foot mark in the shot put and close the gap on state leader and indoor state champion Emily Stauffer of Cocalico who has already thrown 42-9 feet this season. Kristen Morrison of North Penn will be the favorite in the discus who threw a best of 118 feet last spring.

Tyler Whitmore of Upper Moreland had a good freshman year in the sprints and will look to start the spring season on the right foot in the 100 and 200 meter dashes against the Cheltenham duo of Mark Thompson and Christian Brissett. 4x200 meter relay All American Joe Smith of Norristown will also be in the mix in the 100 along with Lamont Veal of Cardinal O'Hara. Indoor 60 and 200 meter champion Niager Mathis of Swenson will be joining the sprint party in the 200 and 400 meter dashes. Max Burgess of Great Valley will also be in the mix in the 200 meter dash. Christian Hunter of Penn Wood and Dave Stellato of Wissahickon are in the 400 meter dash to set up what could be a great race against Mathis.

In the hurdles, Todd Townsend of Newmann Goretti will be the man to beat in both hurdle races, where he has medaled in both events at the AA state meet in each of the past two seasons and won a gold medal in 2011. Indoor state high hurdle finalist Jeremiah Agrio of Archbishop Ryan will look to challenge Townsend in the 110 meter hurdles while Donaldo Benjamin of Imhotep will go head to head in both hurdle events.

In the distance events, Jeff Wiseman of Council Rock South will be entering the 800 meter run after running a lifetime best at the indoor state championships in a 3rd place effort. John Lewis of Cheltenham is also coming off a lifetime best performance indoors and will be going head to head looking to get off to a nice start. Billy Wolffe of Great Valley will also be in the mix in the event. In the 1600 meter run, Sam Ritz of Germantown Academy will be taking on veterans Nick Scarpato of Springfield Delco, Pat Hopkins of Methacton and Francis Ferruzzi of Upper Dublin. Ferruzzi won the 3200 meter run at this meet last year. Speaking of the 3200, Cardinal O'Hara will have five guys competing in the race, four of which earned All American certificates at the indoor national championships. Indoor state #1 miler Ben Ritz of Germantown Academy will look to break up the O'Hara pack.

In the relays, Norristown will be competing in the 4x100 meter relay against Wissahickon, Delaware Valley Charter and Cheltenham. After a big indoor season, Norristown will be looking to continue that momentum and turn it into a huge start to the outdoor season. Penn Wood will be the favorites in the 4x400 meter relay against Cheltenham, Wissahickon and Cardinal O'Hara. Penn Wood are the defending outdoor champions in the event. O'Hara will be in the 4x800 and distance medley relays. Germantown Friends are also entered in both relays and will be led by Sam Aziz and Lyle Wistar. Upper Dublin will be in the mix in the distance medley relay while Council Rock South will also contend in the 4x800 meter relay.

In the jumps, Jordan Bryan of St Joe's Prep will be going head to head with Dan Boardman of North Penn in the high jump. Bryan cleared 6-5 indoors and won the PCL title. Vince Esposito of North Penn will be challenged in the pole vault by Ryan Pierson of Spring Ford and Brian Shaeffer of St Joe's Prep, who have all cleared 14 feet in their careers. Chris Spadaro of Council Rock South, Joe Smith of Norristown and Khiry Twyman of Girard College will be the top contenders in the long jump after they all had solid indoor seasons. Spadaro will also be in the triple jump against Jared Alston of North Penn and Kyree Willis-Lear of Cheltenham. All have cleared 45 feet in their careers.

In the throws, Morgan Shigo of Fleetwood Area will be competing in the shot put after throwing a big 56-8 at the indoor national championships and he will be the favorite to start his season with a win. Cocalico will have the duo of Spencer Moser and Jhett Janis in the javelin, and the two will be challenged by JD Lasalle of Hatboro Horsham. In the discus, Bryan Pearson of Bangor Area will look to set himself up to be one of the favorites to win the state title with a strong performance on Saturday.