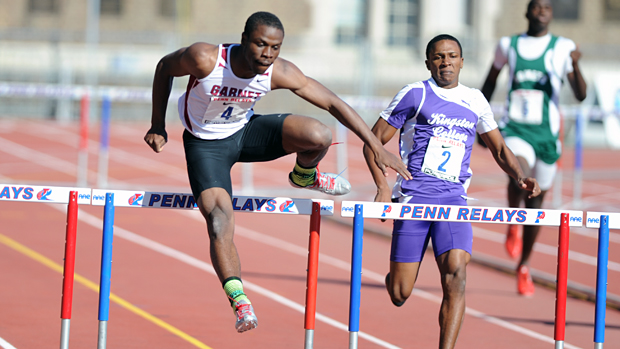 Wellington Zaza entered the outdoor track and field season with an impressive array of awards over the indoor season, collaring state championships in the long jump, triple jump and the 60-meter hurdles.

It was a nice moment, one that surely gave Zaza plenty of confidence. Heading into outdoors, he was ranked nationally in the 110-hurdles and the triple jump. And he had offers from four major Division I colleges.

But the accomplishments, while plentiful, aren't driving the senior, who is with his third school in three years at Garnet Valley. According to his coach, Andrew Etter, Zaza is pitching to join an elusive club: Four events, four state medals.

On Saturday, the senior began to set the tone for his outdoor season, taking third in the Penn Relay Carnival’s 400-meter hurdles, posting a US#2 mark of 52.79 seconds -- it was also the first time he ran the event.

It wasn’t all together surprising, considering the national merit Zaza earned heading into the season. But to be able to put it together on a national stage, against international competition, was impressive.

“It was fantastic,” Zaza said of the race, adding that he enjoyed competing against athletes from other states and Jamaica. Omar McLeod of Jamaica won the event in 51.62, while Maryland-based Julian Woods was second in 52.45, running in a separate heat.

In a competitive race like the 400-hurdles, Zaza’s strategy was simple.

“I like to make up the stagger on one person on the outside and maintain on the back stretch,” he said. “About 150 left, I give it all that I have.”

It's certainly possible for Zaza to achieve the highest marks in the 110-hurdles, 300-hurdles, long jump and triple jump this outdoor season, but it won't come easy.

In 2012, as he helped Strath Haven claim a PIAA Class AAA team championship, he only captured one gold medal in the triple jump, while settling for second in the 300-hurdles and fourth in the 110-hurdles.

"That's motivating him, absolutely," said Etter, who's in his first year leading the Garnet Valley boy's program after nearly a decade of coaching experience. "That's his goal for the season.

"We've had some small conversations about it, but my sense from him is that I think he's looking to come away with four golds."

His state championship leaps at indoors in February would put him more than 12 inches ahead of the current state leaders in each of the events.

"I would say he's one of the most talented and accomplished athletes in the state," said Etter, who added that Texas Christian, Ohio State, Penn State and the University of Miami are all recruiting Zaza.

What could set him apart, and what ultimately will determine if his goals are met, is preparation. Etter says the senior, a tri-captain for Garnet Valley, is disciplined and aware of his training.

"He knows where he stands and what his times need to be," Etter said. "He is a very diligent preparer. He knows what he has to do, both mentally and physically."

In the 300 hurdles, he's working on his speed in longer distances.

"That's a big one," Etter said. "He comes from a sprinting background, so we've been working on endurance for the 300-meter hurdles. He's working on starts, general form, but also endurance, which will matter greatly."

As the season moves forward, Etter said Zaza will continue to improve. Time will tell if his ambitious goal will be met.

But for the senior, whose only critic is himself, motivation seems to be driving him.

"I think he is finding his form now," Etter said. "He has progressed well and I think some of his results speak for themselves."