She is not the tallest sprinter in the world, but what she lacks in stature is made up for in the often used slang vernacular term “swagger.”

“I’m coming.  Hear me, I’m coming!”  These are words from the recently crowned SOL American Conference double sprint champion Rowanna Watson of Norristown.  Quiet and humble away from the track, these words become evident when she steps into the starting blocks.  “I’m just tired of seeing the same people in the finals.  I only have two state championship medals, and none of them are individuals.  I’m going to be on that podium.  I’m coming.  Hear me, I’m coming!” 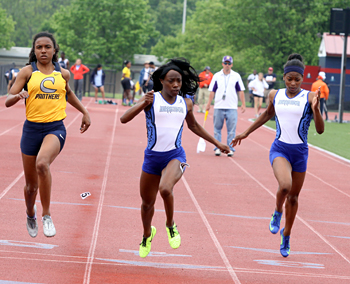 Both Watson and sprint coach Milton Williams attribute this new found swag, or confidence, to better focus and consistency.  “I believe that has been the area where she has improved the most” said Williams.  “A lot of times, athletes don’t understand the amount of discipline and mental toughness it takes to be successful in this sport.  What these student-athletes do is not easy; however the sport teaches kids a great deal of life lessons.  In our first year together, we [he and Watson] experienced some ups and downs, but it ended on a great high with them winning the 400m relay as sophomores. ” Watson agrees with her coach.  “I’ve become more coachable and just making sure I’m on the same page with Coach Milton.”  As it relates to her focus, “Embracing the [Quarter].  A lot of kids do not like the pain it brings, but you can still run a great 100m or 200m with the help of running some strong 400’s throughout the year.“

Watson is merely having fun with the sport of track & field.  “I don’t do anything outside of track.  I just fell in love with the sport.”  That love affair began a mere six years ago when the then competition cheerleader joined the softball team.  Raving over her speed around the bases, her teammates urged her to sign up for track and field via Norristown P.A.L Team Speed.  “I just asked my dad to sign me up,” and the rest is history.

The confidence, however, was not always there.  “I used to be nervous to run against people like [Quakertown high school sprint star] Jody-Ann [Evans] because my confidence wasn’t where it needed to be to go out and run well.”   What’s the difference between then and now?   “Being more consistent in practice allows me to run good times in meets which boosted my confidence.  My confidence is at a level it’s never been.”

Watson hopes that confidence will take her to places she’s never been like the Olympic Games,  maybe to even rival her favorite athlete, world champion Carmelita Jeter.  “Her attitude and size reminds me of myself.”

Before then, however, the 100/200m conference champion will take her talents and a 3.2 grade point average just a couple hours south on I-95 to Morgan state University.  “I’ve always wanted to attend an HBCU*.  I feel it’s just a different collegiate experience.” Coach Williams sees potential in his talented sprinter at the next level.  “Right now she ranks as one of the best sprinters I have worked with.  She definitely ranks in the top tier of the sprinters I have coached or developed.  Rowanna has an excellent chance at the next level to become one of the top tiered sprinters in the MEAC conference.”   Watson intends to major in sports medicine and jokingly admits she also wouldn’t mind a role in a new “drum Line” movie.

Next on the agenda is the District One Championships in order to punch her ticket to the Shippensburg podium.  If all goes according to plan, it will be a resounding statement to the MEAC conference that Rowanna Watson “is coming!”