Simply put, getting the right person for each leg is critical to success. Each leg demands different skills and a different mind-set.

Coach Poiesz knows he was blessed with four of the best at what they do. “We had solid legs. And especially important is we did not have to hide anyone.”

They did do some moving around this year, but following their 3rd place finish at the PTFCA Indoor State Champs, they made one final change and it remained that way for the rest of the record-setting year.

The constant for four years at lead-off was Kaitlyn. It is what she was meant to do 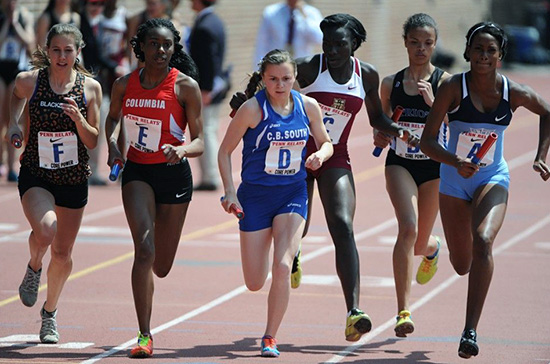 The diminutive hard-charger could get lost among the trees at times, but you always knew she was not running longer than she had to, and that when she hit the handoff, it would be on the inside.

But Kaitlin didn’t get to run leadoff because she was the coach’s daughter. Anyone who knows Paul knows that spots on his relays are earned, retained and earned some more.

Kaitlin says that it was never a big deal with anyone else on the team when she would occasionally call him dad. “It was not weird at all. He’s just a good coach. And he certainly didn’t play any favorites. He may have even been a little harder on me.”

According to Paul, the father-daughter kept the coach-athlete relationship at the track. “I used to ask her if we could co-exist, and every time she said we’d would make it work.”

“Kaitlin is the quintessential lead-off runner--never once did she back down to anyone, and she ALWAYS kept her team in the race,” a proud coach-dad says with absolutely no reservations.

But the day he knew for sure - and the last time the thought even entered his mind about possibly switching her to another leg, he got the answer that shut down all discussion.

“One day on the way home from practice, I mentioned that maybe Amber or Brianna (with better foot speed) should be leadoff.”

Paul knew almost immediately he had stepped into something.

He glanced over and the look on Kaitlin’s face said it all. But just for clarity, she added, “Uh, no… that’s not happening. That’s my spot.”

As Kaitlin explains… “I’m really aggressive. I don’t let anyone push me around.” 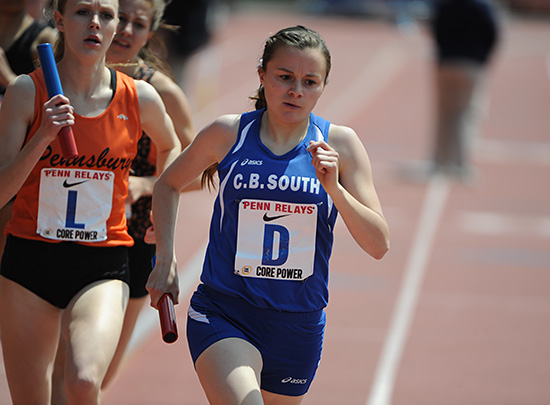 Paul’s Take on Kate - I loved it when she had the up-stagger, knowing that she would take the entire backstretch to run the diagonal to the 200 mark, never running one more step than was required. Sure she got boxed-in sometimes--always when she started on the back line--but she would always find her space to get out of it. She wanted that baton to start with her. Certainly the most vocal of the 4, she would be the first to offer information when I talked to them as a group, perhaps asking them how they were feeling or what they were thinking. She sacrificed more of her own individuality than the others, as each year, attention turned away from her maybe breaking 5 in the 1600 to her needing to be that lead-off leg. She agreed early in this year that for the sake of the relay, she would have to train as a 400/800 runner instead of for the 1600. She still pr'ed at the Henderson Invite with 5:04 and finally broke 60 for the first time on the 4x4 relay at Leagues. I have to say I am proud of her for all of that--as a coach, sure, but mostly as a dad. We had a rare opportunity to spend these 4 years together. The best feeling in the world was often looking down the track as the starter and seeing her focused eyes looking back at me from the starting line.

With hands, arms, legs and batons flying every which way during the first handoff,
Amber was a constant rock of consistency. 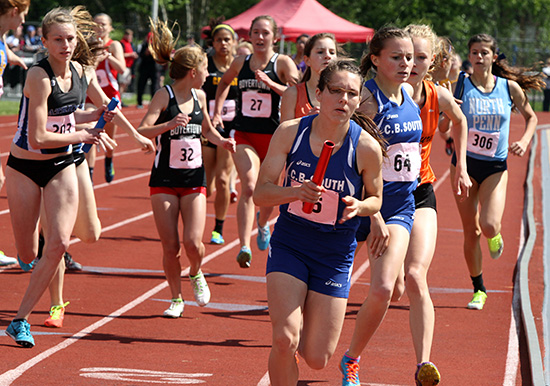 As Coach Poiesz drilled into their heads - from Kaitlin running the tangent in a straight line, to Amber taking and maintaining position on lane one to keep the race as close to 3200 meters as possible, the two opening legs were always where they needed to be. “It’s all bunched, and everyone is coming so fast, but I always had to plan where she (Kaitlin) would hit on the track,” Amber said.

As Paul notes… “Amber was regularly confronted with perhaps the toughest job on the relay.”

If she sometimes had to pass someone on the curve after the handoff, then that’s what she would do.

“I am adamant about one thing with hand-offs,” Poiesz continues. “The incoming runner is never allowed to stray out to where the next runner is positioned on the line waiting for the pass. They must stay inside.  As with Kate running the diagonal, I do not want them running any further than their 800 meters. The outgoing runner has the responsibility of getting inside to lane one, to make the exchange. The toughest exchange to do this on is, of course, from the 1st leg to 2nd leg, where there is the most congestion before the race strings out.

But focus was key. “I would focus on Kaitlin and only her,” Amber says. “I would do what I had to do. Instinct and experience told me where to be.”

Alexa sees Amber as the perfect second leg for one simple reason. “Amber is out there to race. Just race. She just likes to chase. and has no issues going around someone.” 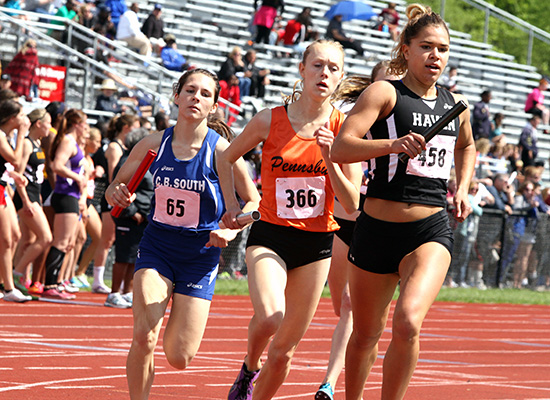 Paul’s Angle on Amber - It was never evident early on, but definitely the "older sister" of the twins. If there was fun to be had, Amber usually had the upper-hand over Brianna. Amber handled this toughest of exchanges beautifully time after time, often sneaking between other runners to get to the spot where she would meet Kate on her way through the zone. It can be risky, I know, but Amber never flinched from the task, not only getting to where she had to, but doing so well into the zone as we all try to coach. If you look at the race at states, Palmyra's lead-off runs out to lane 3 or 4 to get to her teammate, passing Kate on the way. Kate remains inside, Amber meets Kate as always and we are in 3rd instead of 4th. There is a lot of trust that has to be built into that whole thing. Kate never doubted that Amber would do what she had to to make things happen correctly. Therefore Kate was able to stay inside and avoid making it the 3210 meter relay. As more teams front-loaded their relays in order to stay with us late in the season, Amber was a rock. She is a fierce and gutsy competitor. No one intimidated her and she became fearless on the track. By the way--last year, she broke 2:20 only once ---from that 2:12.3? Holy cow!!

Finding her spot as the third leg took Alexa from lead-off to anchor,
and finally to her home setting up the anchor, Brianna. 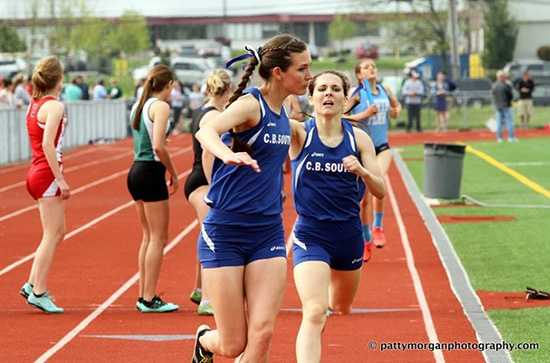 Alexa actually tried out the lead-off early in her freshman year before Kaitlin took over her natural spot.

As Alexa tells it, she almost false-started in the lead-off position. “Ever since then, it has not been me” she says with some relief.  “I don’t know how Kate does it. Always in the best position. She and Amber are the ones to have to fight all those people.”

“If I had to start, Kate would never get the baton,” she says jokingly.

Alexa did some anchoring as a sophomore, going 2:16.2. She struggled a bit as a junior only dipping under 2:20 once. But by this year, she was back on form and posted a 2:12, which put her on anchor through the 2014 indoor state meet.

The thing that makes the 3rd leg perfect for Alexa is that the crowd is gone. She either has to chase and pass, or just put it away. Her last two races at Districts and States where they went under 9 minutes twice, just showed what a competitor she really was.

“We set our goal at states (5th in 2013) and wanted to make something happen. This would be our year.

Every workout. Every minute in the pool. Yoga on Wednesdays after practice. All of it. Everything we did was together.”

“I did not want to be the person to mess up. We all would do our jobs.” 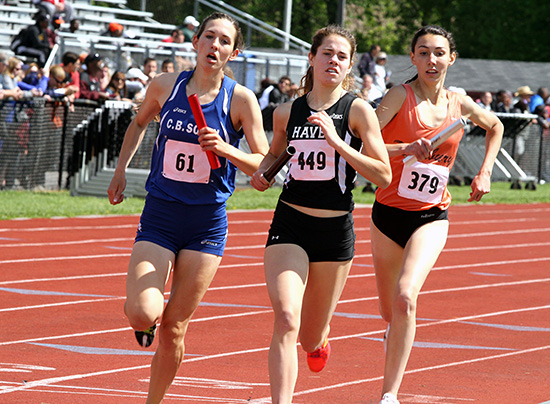 Paul’s Appreciation for Alexa - I think Alexa had a special appreciation for things this year after struggling as she did last year. She savored every good race. She was our worrier more than anyone else, but one thing I knew for 4 years was that I always would get every ounce of effort out of her. From hard critical zone workouts to races, she was the most likely to need help getting up off of the track at the end. Her comment to me after the state record? "It was all worth it." She despised the 6:00 AM pool workouts. She hated the dry heaves that were sometimes inevitable for her after races and workouts over the years, but she never once shied away from the work and the pain. She knew it was coming and always stood up to it like a champion. It's funny in a way. Ali and Kristen (Strath Haven) ran in the finals for 4 years at indoor and outdoor states--everyone knows that. How many people know that Kate and Alexa did the same thing--medaling 7 consecutive times (11th place indoor 2011)? She is a stalwart and a workhorse. As disappointed as she was last year after states with her own performance, to see her run 2:12 this year was just awesome. Being the one that blew the race open as she did (BTW--look at the tape of the 2009 boys team at states and see if there is any similarity in the races) has to make her feel great, and it should. She deserved that opportunity; she seized it, and essentially put the race away. 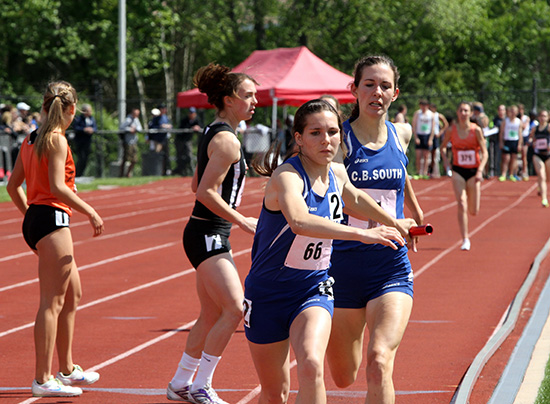 Alexa had been running anchor through indoor, but at the end of the season, Coach Poiesz made the decision to move Brianna into the spot. He and Coach Cox simply thought that Brianna had grown into and earned the opportunity to be the anchor leg.

“While there was no concern with Alexa, I thought that Brianna would be the one that would in the long run blossom into that huge anchor that we needed, even though at the time, there was nothing split-wise to separate them (or Amber for that matter, as she actually had the best split with 2:17 at states).

With 56-second 400 wheels, Brianna was in total agreement.

“When it’s just me and one or two other people, I can run faster that way. And I can do it by myself.” 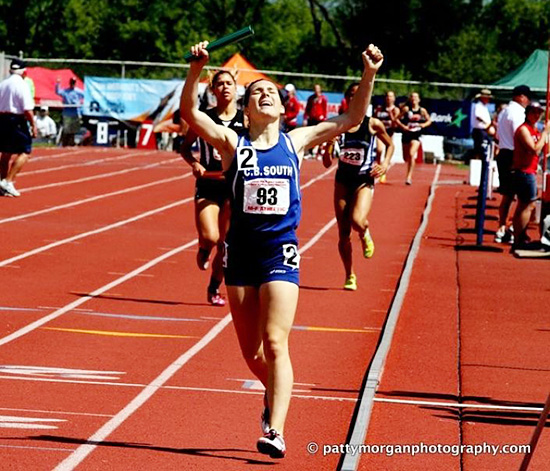 Paul Brags on Brianna - What can you say about a 2:10 anchor? Tenacious - how's that for a word for her. Ultimately, she knew that a lot would ride on her ability to finish the task. As great as Ali Wilson is, I had no doubt that we would win the race when Alexa took the lead. Brianna would not be passed. It is that simple. She also realized herself that she may have to do so with no one to chase. More than any of the others, Brianna, I think, relished the big races and chance to prove herself against the best around.

NEXT: Part 3 - The season. Not always first. But always faster.