The season. Not always first. But always faster.

(They had a secret supporter with them at every race.)


Actually running eight all-out 4x800’s and getting faster in each one, culminating in a state record, was NOT on anyone’s radar.

According to Kaitlin, she had never even heard of anything like that.

They kept it simple. The goals for each season were for each person to give their best at every practice, and each had to take care of their own business on their four (indoor) or two (outdoor) laps.

Coming into the season nursing a hamstring injury suffered during the cross country state championships, Kaitlin was just trying to be ready when it counted, and actually would do no speed work until after this meet. And Brianna was nursing a bit of knee tendonitis in January as well. So expectations were not out of hand.

They selected the end-of-January New Balance Games as the opening meet. The purpose of the meet was solely to get a qualifying time for states, and if all went well, even the Penn Relays qualifier.

Amber saw this specific race as a personal breakthrough for her. “For the first time, I didn’t think about everything. I just raced. It made a difference the rest of the year.”

The time earned them an invite to the New Balance Collegiate Meet… an invitation they would turn down in order to focus on training. For the DMR. 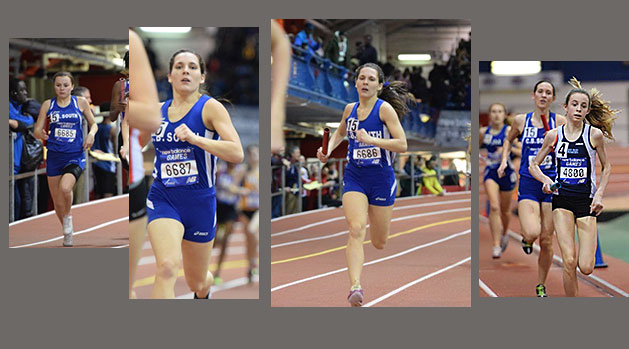 That was the plan.

What happened next kind of surprised everyone, and would change the course of their season in a big way.

They received an invitation to The Millrose Games, and it was simply an opportunity they could not pass up.

The original plan for the season had been to aim for the DMR. But a 9:17.44 at Millrose, which made them PA#1 at the time, forced the coaches to rethink their event choice.

“How can you do the DMR when you’re the top 4x800 team in the state,” Paul reasoned. 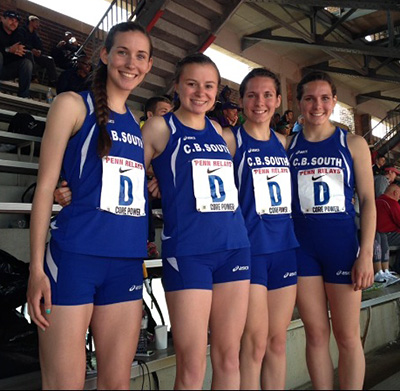 The ensuing race at PTFCA Indoor States, where they would finish 3rd to the strong Strath Haven and Great Valley teams, simply solidified their resolve to make their 4x8 team the best they could be.

They were not at all upset with their place. After all, a 9:12 was another school record. And their ultimate goal was to win states outdoor. 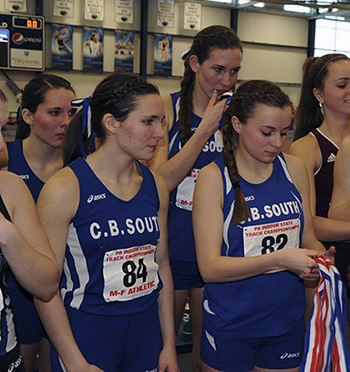 While they viewed indoor as training for outdoor, at New Balance Nationals they really wanted to get top six and all-American. (Actually, Alexa really wanted the crowns that go with the certificate, as well.)

They did better than that, with Freehold NJ pulling away early, they simply raced, and Brianna nearly pulled off a 3rd place finish, but the time of 9:07.08 continued to show improvement.

Cooler yet, just minutes after the race, and with hugs still going around, PA Associate Webmaster Lex Mercado informed the girls that the time was a new PA Indoor All-Time Best.

And Kaitlin immediately noticed that they had also beaten Strath Haven and Great Valley.

The tide had turned. 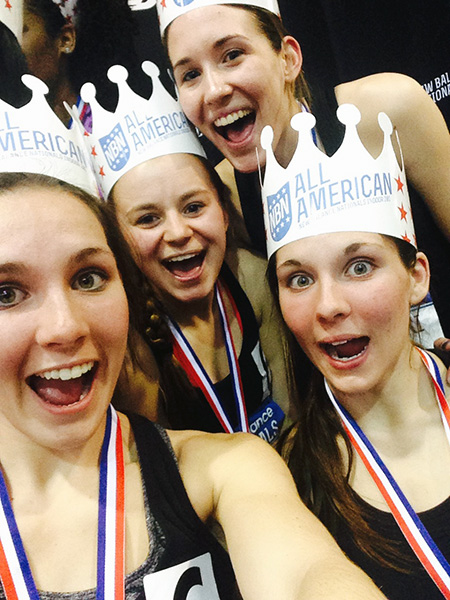 At the Penn Relays, a spot in the Championship of America round can never be taken for granted. Especially with so many of the top teams in the US in the trials. Kaitlin went virtually all-out in an opening 2:17 to make sure Amber had the opening she needed to take care of business. “We took 2nd in our heat, but our work was done.”

The girls were feeling quite confident.

Privately, they believed a 9:07 was possible.

They were wrong again.

And once again, ahead of PA rivals Strath Haven and Great Valley.

Alexa confided… “We really wanted to see if we could beat them again.” 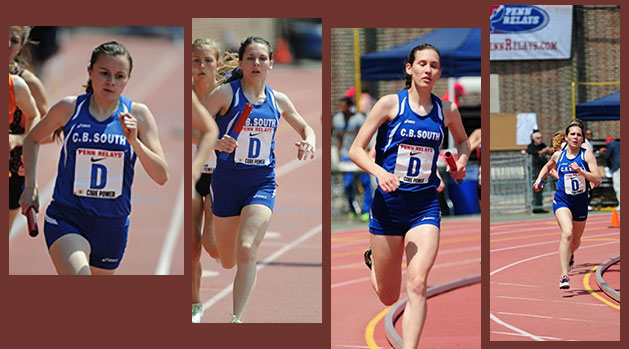 For a change of pace, they ran the DMR at the Central Bucks West Invitational, and then a 4x400 at the Lady Skins Invite. Their 12:20.74 at CB West would ultimately finish the season as PA#4 behind only the top three PA teams from the Penn Relays Championship of America. And a 4:06.68 2nd place finish at Neshaminy was a nice workout that gave a good indication where they were on their 4x800 training.

They went into ‘hiding’, continuing their hard workouts on the track, in the pool and adding flexibility and some zen-ness with their weekly yoga. (See the full workout story by Phil Grove).

What they did better than most in workouts was to feed off of each other. All-out stuff, from 200’s and 300’s to 600’s… but working as a pack, trading leadership roles and pretending they were actually racing.

As they did a small taper for their SOL Continental Conference Championships, no one expected their times to continue to drop.

But these girls had a mind-set. Just race. Get better each time. And never, ever let one of your teammates down.

And they were motivated. They wanted to repeat as SOL champs.

At this point nothing would have surprised Paul. “After Penn, we realized they were getting faster every time they raced. So why would SOL be any different?

While the time was beyond impressive, they were actually prepping for what was to come. Learning how to get to the front, stay in the front, and pull away.

While on their cool-down after their SOL race, everyone kept saying to them they were so close to breaking 9 minutes.

“We all thought we could actually do it,” Kaitlin confessed. 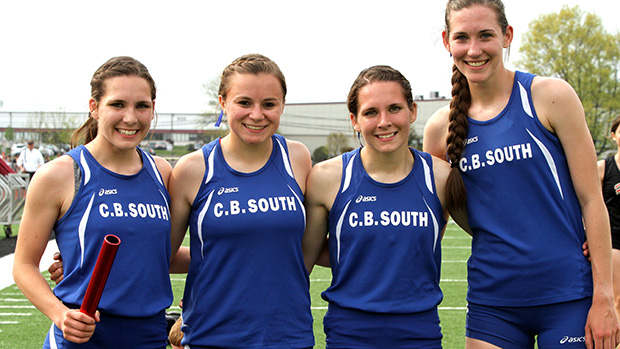 By Districts, the girls knew they had a bulls-eye on their backs.

“Between ourselves, we did talk about the “Four Anchors” of Henderson,” Alexa shared.

But they had business to attend to.

The idea in the semis was to stay near the leaders, stay out of trouble and just get the stick around.

With the meet delayed a day because of a forecast of very heavy rain, the girls got an extra day of rest.

Kaitlin said they were pretty nervous before the race, but simply wanted to win. “We weren’t worried about time.”

However, then she quickly added. “But we wanted to show we were serious and wanted to win the state title.”

And that they did.

In what turned out to be a template for the state race - when rivals threw anchors at them on earlier legs - it all went as designed. Kaitlin gets position and has a perfect inside handoff to Amber. Amber pulls into position with the leaders and then turns it over to Alexa.

Alexa then powers away on her second lap to give Brianna a healthy lead. And Brianna isn’t coming back.

Their 8:58.18 set the district record and also went down as the 2nd fastest all-time in PA, breaking the 1982 record that Henderson had broken in 2011. 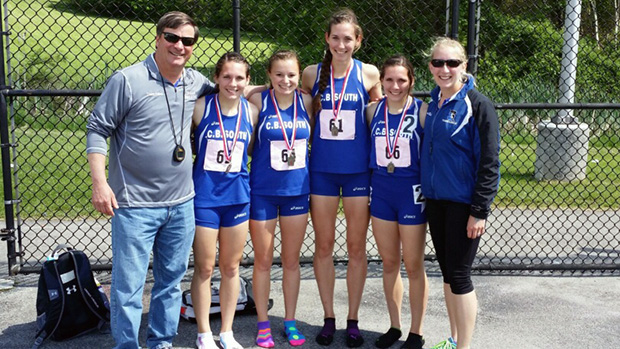 Under the tent, competitors reminded them of that fact repeatedly.

And that is the moment when the Ghost of Henderson appeared. That is when 8:55 came to mind.

But they quickly moved past time, and reminded themselves of their mantra from all season. Something Coach Poiesz had said pretty much every waking moment.

“You can’t set records if you don’t win the race.”

As they leave the track, they get wishes of luck “to break the record.”

No worries. They would not be distracted.

(And also overcome adversity... like being locked out of your van in the Bronx in 10 degree weather.
Can you say tough girls?) 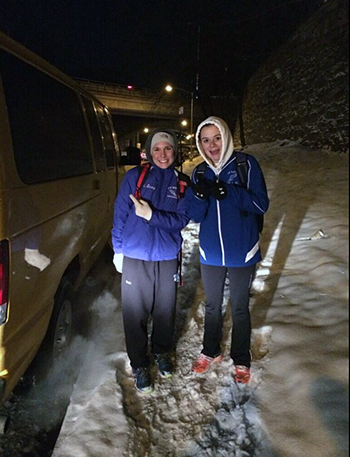 (But they did find a place to stay warm. They just didn't have a reservation.) 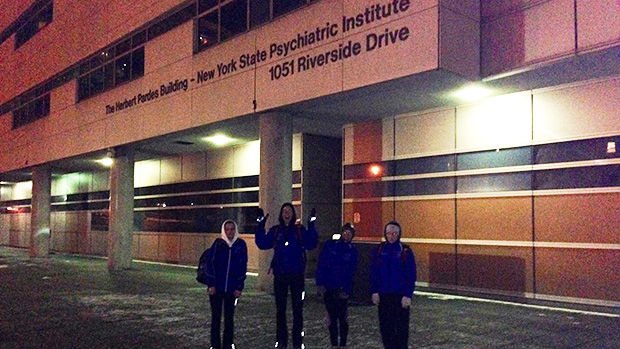 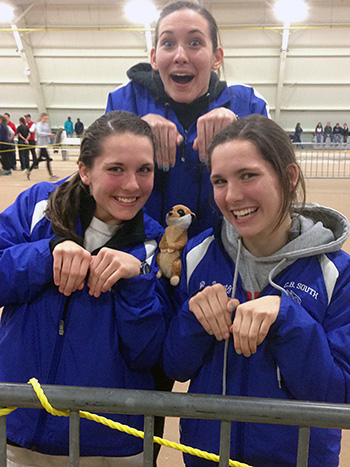 SECRET SUPPORTER NOTICE: Our AWESOME team 'mascot'. Burrows is a meerkat and we took him to all our indoor and outdoor meets! He's been there for us every race and kp and Alexa got Brianna and I a "burrows jr" to keep the tradition alive! Hahaha here is a picture of him..." - Amber Stratz

NEXT: Part 4 - Just like Henderson knew something special was about to happen before their state record in 2011, Central Bucks South did as well; and then they Lived their Dream.