Just like Henderson knew something special was about to happen before their state record in 2011, Central Bucks South did as well.

The day after Districts. the team did a pool workout and then met Coach Poiesz at the track at South. They did an 800 meter jog and some striders and then sat down for some words of wisdom.

Apparently those words of wisdom had already been ingrained with this group and they listened politely as Paul reminded them that racing was not about records, but winning a race.

To Paul, it appeared they were more aware that it would be their last race and their last workouts together. Forever.

They listened politely. And then they stretched.

Paul proceeded to walk to the other end of the track to catch up with boys’ head coach Jason Gable.

He was in for a surprise.

“When I looked up I saw them spread out around the grass infield, each staring at the ground. They were looking in clover patches for 4-leaf clovers! Believe it or not, they would not finish until they had all found at least one--and they did--with a scream of "I found one" as each accomplished her goal.”

An inward smile of satisfaction crossed his face.

“I had been thinking for some time that they really didn't need us (the coaches) for anything more than their workouts--they had everything else under control themselves--and this confirmed it. They were still high school students (I really can't say kids anymore) and they were dealing with whatever stress that was around them in their own way.”

At that moment he knew.

Henderson coach Bill Lott had talked about his team’s last workout before setting the record and knowing that the ‘four anchors’ were ready.

“For me, this was that defining moment. They would do this their way, staying grounded (quite literally in this case) and not letting anyone else's expectations get in their way.”

The wait was over.

They qualified with ease in the prelims at States, winning their heat of the trials in a comfortable 9:16.98.

They stuck around (hydrating, of course and out of the sun) and watched the boys 4x400. That night they went to movies… and it helped them relax.

However, when they woke up in the morning, they simply stared at each other. “This is the day we’ve been waiting 6 months for” was the refrain.

At breakfast, they picked at their food and did not actually eat that much. Alll four looked nervous to their coach. “They even tried to joke around a little bit.”

One of the things they used to do was to wear identical bows. At Districts, they jogged out wearing bows in the same color. At the line, no go. And at States, no go again. So the bows were gone.

The girls followed their routine from the clerking tent. Keeping at the water. High fives all around.

They jog down track slowly (can’t use any more energy then necessary). “Then one last high five and an occasional pat on the back. It’s something we did all season.”

Kaitlin loves leading off. “I could not imagine having to watch. I like having control. Hitting that first 200, getting in position. and setting up the rest of the race.”

What surprised everyone was that Strath Haven put their anchor Kristen Miller on the 2nd leg - something teams had been trying indoor and outdoor to break up the CB South momentum.

Kaitlin didn’t see Amber’s first lap. She had passed off in 3rd with Haven about five meters ahead. “But Amber was right on her.”

“When I got the baton in 3rd I was surprised at the Haven split. But it’s a race, so in the first 200 I closed on her, still in third. At the 400 I knew I had to focus… because that can put us ahead. I passed (the Great Valley girl) and followed Haven. My legs were numb. I just told myself I have to stay with her. Pace is good. But I did not realize it was not Haven’s normal 2nd leg Alli Wilson. But that didn’t change anything.”

According to Amber, who was completely collapsed on the infield after her leg, and even a bit dizzy, all she saw was Kate up and cheering for Alexa.

Kate knew Alexa was in perfect position. “It was Districts all over again. Keep under control and pull away at 400.”

Alexa was third as she got the baton from Amber.

“At 400 I wanted to take the lead, but was a little hesitant. But when I heard ‘don’t settle’ at 300 to go,  and I took the lead. That’s my normal kick, but when I saw Brianna at the line waiting for me, I tried to kick again.”

Amber, who had recovered somewhat, got Alexa water. “Alexa crushed that last lap. That’s when I knew we were going to win it.”

And Brianna - the anchor they all knew would shine when it counted - did something slightly unexpected.

“Remember, I’m a 400 runner, so it didn’t really feel like a 61. And I didn’t want to have anyone get any ideas that they could catch me.”

With 200 to go the announcer said something about the state record.

With 150 to go, Alexa was finally able to stand up but did not look at the clock.

With 50 meters to go, Brianna said she saw the 8 on the clock. And she knew what it meant.”

Alexa said she was almost not surprised.

Her ‘sisters’ gathered around her. Amber grabbed her face. And hugs and smiles were everywhere. 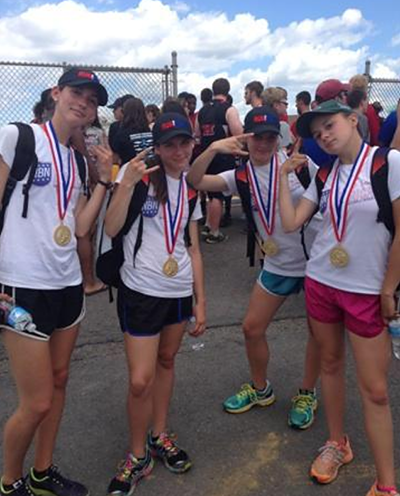 Each girl had split faster than the splits of the ‘Four Anchors’ of Henderson.

But there was one more very cool surprise.

NEXT: Part 5 - The “Four Anchors” anchor Natalie Deacon wanted to witness the Henderson record being broken. But she did much more...
As for Next Year…