SELINSGROVE--- The Susquehanna University High School Indoor Classic, the only indoor meet within the boundaries of District 4, offered a mix of athletes in the midst of their indoor season and those who were just getting started or even competing as a one off before outdoor track and field gets underway.

Regardless, there were some high-flying performances Sunday at SU's James Garrett Sports Complex (Photos by Barbara Krohn and Bill Shearn) 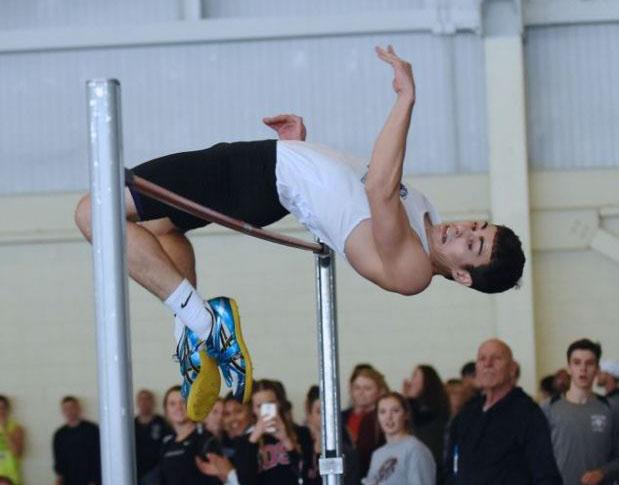 Petraski breaks out in high jump 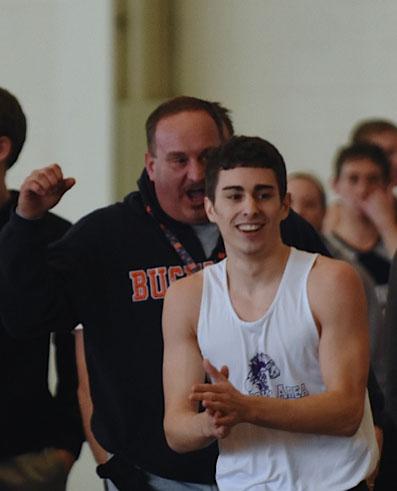 Shamokin's Chris Petraski is 5-7 and change. Coming into the meet with a PR of 6-5 he had long since achieved every high jumper's aim of jumping high their height.

Sunday, the Bucknell University-bound senior, did that plus a foot when he cleared 6-7 to become the new PA No. 2.

The effort was a culmination of intense training on Petraski's part.

"Honestly over the past year I just put in a lot of hard work," he said. "My form is what led me through it.

"Flexibility came naturally to me."

Celebration ensued when the Shamokin jumper cleared his final height but it wasn't until he calmed down a bit that he realized it wasn't just a two-inch PR.

"I always said I wanted to jump a foot over my head - I just realized I did it!"

Carlisle triple jumper DeShawn Millington was one of those athletes making their first indoor appearance Sunday. Mostly because Millington spends his winter season jumping up to grab rebounds on Carlisle's basketball team.

But the SU meet was on a Sunday.

"Coach asked me if I wanted to jump on any given Sunday," said Millington. "I chose this one.

"(The triple jump) is kind of different than jumping for rebounds," said the junior. "I haven't jumped in nine months. I'm kind of rusty."

As far as competing again in the indoor season, Millington said he would be up for the state meet. 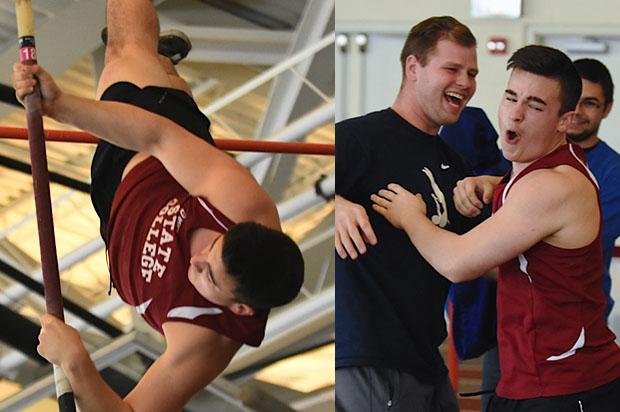 State College's Griffin Thompson broke out Sunday with a PR 15-00 vault putting him No. 2 in the state.

Last week at Kevin Dare Thompson jumped 14-00 but in practice he was clearing 15 albeit with a bungee cord.

"But when we put the bar up I couldn't clear it," said the State College senior.

So last week it he worked on the basics as well as the minutia so critical in the multi-phase event.

"Monday we worked on the little things," said Thompson. "Tuesday we went back to basics. Friday we brought it together.

"And it worked on Sunday."

With a previous indoor PR of 14-2, Thompson was celebrating after 14-6 as well as his 15-0 leap - both made on his first attempts.

And afterwards, having turned good practice into good performance, the senior felt he had turned a corner.

"The best part of it is that I focused on the mental - plant the pole and go." 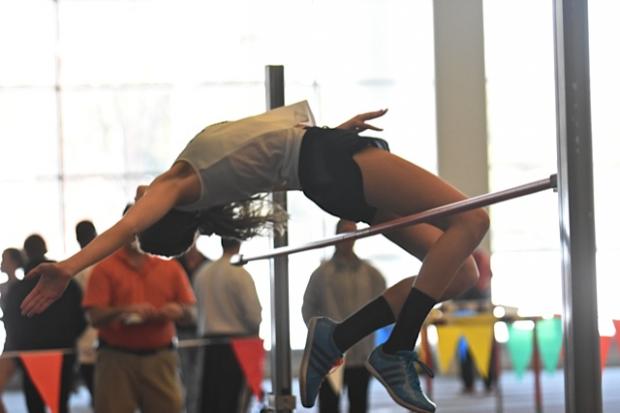 Kravitsky picks up where she left off in high jump

Last spring Dallas' Katie Kravitsky finished her season with a 5-4 jump at the PIAA track and field championships good for 6th place.

Sunday, in her first actual jumps of the new year, she matched that and came away the girls high jump winner.

"It's pretty good," said the senior. "I haven't jumped in eight months. And we don't have a place to practice at school so it's my first jump of the year."

"I'm taking those first couple of steps," said Kravitsky who's PR is 5-9. "I'm pretty happy with it. It the whole qualifying for states thing out of the way." 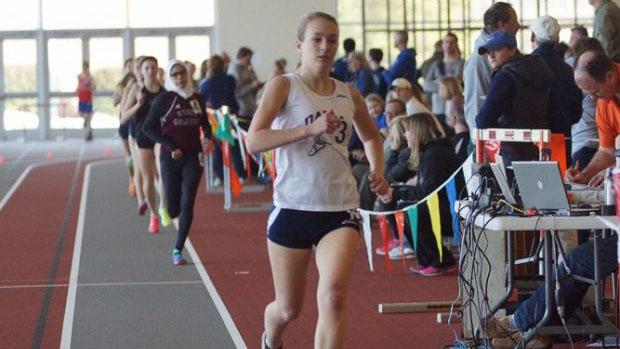 Rome surprises herself in 3000

The performance list for the girls 3000 made it look like one of the big races of the day Sunday. On it in addition to Rome were Pennsbury's Hannah Molloy and Olivia Sargent.

"I saw the heat sheet and I was excited but nervous," said Rome. "I didn't know if I was ready to compete with them."

But early Sunday Rome saw that the duo had stayed at Ocean Breeze.

So pressure off, but also pretty much on her own pace-wise.

"I fell asleep in the middle of the race a little," admitted Rome. "But I heard my splits and they were OK."

When she crossed the finish line Rome could hardly believe her 10:12.98 time a new PA No. 2 behind Germantown's Abbe Goldstein.

She won't have to wait very long. Rome is entered in the event at PTFCA on February 13.

And the PIAA cross country champion is hoping for a very performance on what turns out to be a special day for her.

"It's my birthday," said Rome. "Maybe it will bring me a little luck."

Selinsgrove senior Brody Beiler had some goals for his first 3000 - run even splits and try to break nine minutes.

"It's nice because I'm from Selinsgrove and the track is a mile away. I can train at this track any time I want.

"I think that helps." 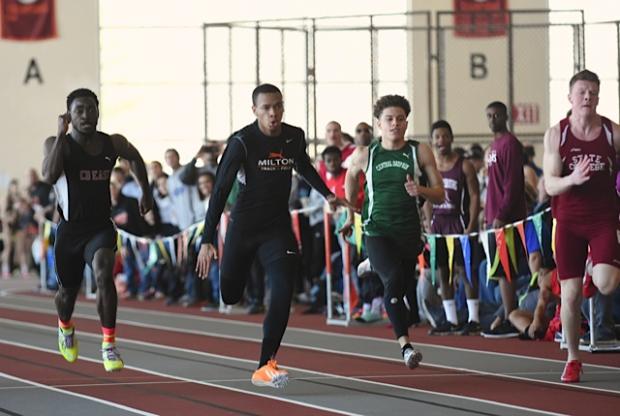 In the outdoor season the Black Panthers athletes have to make do with a cinder track. In the winter, it's whenever they can get into the gym or more likely the halls.

"He's been running in the halls," said Milton coach Tom Leeser. "He doesn't get to go over more than two hurdles at a time."

Nieves has been making do.

"I've been doing a ton of drills for hurdles at school," said the senior. "And I've been working on my starts."

"In the 60 dash his start was as good as anyone else's," said Leeser. "There were times last spring where he'd come out of the blocks and have to catch them.

"He's really improved from the end of last spring to now. He's been lifting and he's stronger."

"I wasn't expecting it," he said after the hurdle finals. "It's a little challenging but I like it." 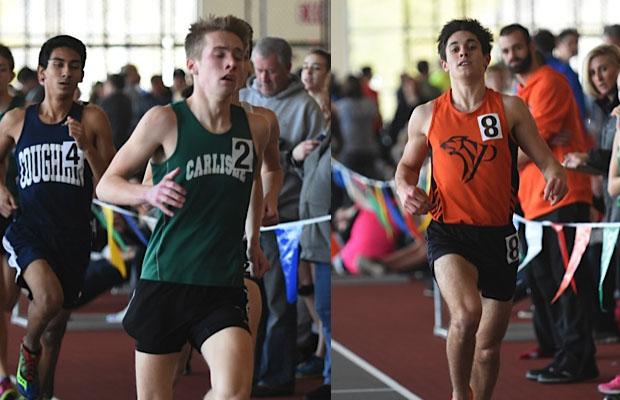 For Carlisle's Matt Wisner (above left) Sunday's mile race was a test. Saturday the senior had just won the Ocean Breeze 800 with a PR 1:55.69.

The 800 specialist who will run for Duke next year fell a bit short of that goal finishing in 4:27.97.

East Pennsboro's Sam Signor (above right) won the prior heat, shaking off a bit more than rust.

In between placing 5th at the PIAA Class AA cross country championships and Sunday's meet the senior underwent what he called "head surgery" in December.

"Luckily it turned out alright," he said.

Signor, who also ran the 800 Sunday, said after his mile race, "Sadly that was very difficult. I haven't run in a month. Today I was just hoping to use this as a rust marker."