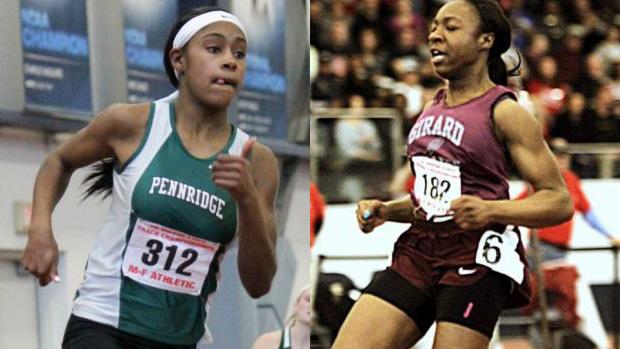 The future of girls' sprinting in Pennsylvania is bright. That much is a given.

But on Sunday at the PTFCA Indoor State Championships, the future was the present.

While there was a great deal of hype entering this indoor season surrounding some seasoned upperclassmen, the sprinters who made the most noise on Sunday at Penn State were two of the youngest.

Two freshmen---Kouri Peace of Pennridge and Thelma Davies of Girard College High School--- stole the show on the Horace Ashenfelter Indoor Track on the campus of Penn State University. The pair raced to state titles in the 200 meters and 60 meters respectively, sending shockwaves that reverberated all the way back to their homes in the Greater Philadelphia area. 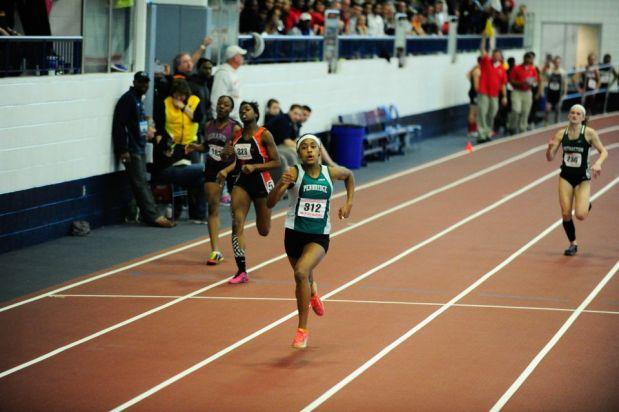 Peace went through three rounds of the 60 dash, finishing third in 7.54 for her first state medal. But her big moment came later in the meet. After staying fresh with the help of her father's roller, Peace turned everyone's head with her dominating performance in the 200 meters.

It figured to be a matchup between the two top seeds, Peace and Pennsbury's Dasia Pressley, in the 200. But Peace, who was in lane four, had already made up the stagger on Pressley in lane five by the time they reached the backstretch. 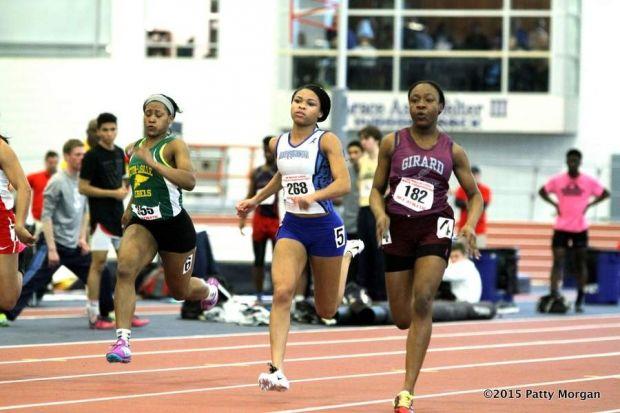 "I just tried to push through the first 20 meters of the race," Peace said. "I was mainly just going after Dasia because she's really fast and I just wanted to catch her and stay with her."

Peace didn't stay with Pressley for long, though. Instead, she cruised past the field, winning and clocking a 23.74. It broke a state record that stood since 2004 held by someone that should be familiar to anyone who has followed the sport of track and field in Pennsylvania: Nicole Leach of West Catholic.

For good measure, Peace ended her day by helping her Pennridge team take fourth in the 4x200-meter relay, where she supplied a great leadoff leg.

Davies, who will compete for Penn Wood in the spring and beyond, got progressively better as the rounds of 60-meter dash went on. She said she's only been practicing with blocks for a short time, so the preliminaries and semis served as another opportunity for her to get acquainted with them. At the PTFCA Carnival two weeks prior, Davies won the 60 dash in 7.72 without blocks.

She ran the best time of 7.60 (a PR) in the preliminary heat before running the fourth best time in the field in the semifinals of 7.57.

"I just started working on my starts with the blocks, so it was kind of difficult during the prelims and the semifinals, but during the finals, I finally got it and I had enough confidence to go out there and win," Davies said.

Davies shined in the finals. It was initially too close to call at the line with her and Chanel Brissett of Cheltenham. When Davies saw her name appear first on the big screen, she covered her mouth with her hands and ran backwards on the home stretch. She blazed a 7.47, tying the all-time United States freshman class record in the process.

The first person to greet her after the race? Brissett, who had just set the PA indoor state record in the 60-meter hurdles right before the dash.

"The girls are super nice," Davies said. "Because I'm a freshman, they took me in. They told me what to do. It's an honor to beat them, especially against Chanel Brissett because she's super, super fast. I was so happy that she hugged me afterwards."

"It's an honor to run against them," Peace said at the PTFCA Carnival about competing with some of the top sprinters in not just Pennsylvania, but the entire country.

Just scanning through the results, it's not hard to see that the friendly, albeit fierce competition between the likes of Peace, Davies, Brissett and Pressley will continue into the spring and beyond. While Pressley is a senior, Peace, Davies and Cheltenham's Bria Barnes are only freshmen. Norristown's Jayana Webb (fifth in the 60 dash finals) is only a sophomore, and Brissett is a junior.

But for now, a pair of freshmen are on top of the sprint scene is Pennsylvania. And they're both hungry for more.

Davies added, "I just want to go out there and get more medals under my belt."