Saturday's Heartland Athletic Conference Championships did not suffer from a lack of talent or exciting competition. With Penn Relays champions Maura Fiamoncini (javelin) and Katie Jones (pole vault) on the girls side and AA No. 1 110 hurdler Ian Nieves on the boys, as well as several other top 8 AA and AAA competitors, the meet yielded 29 national elite silver standard performances. 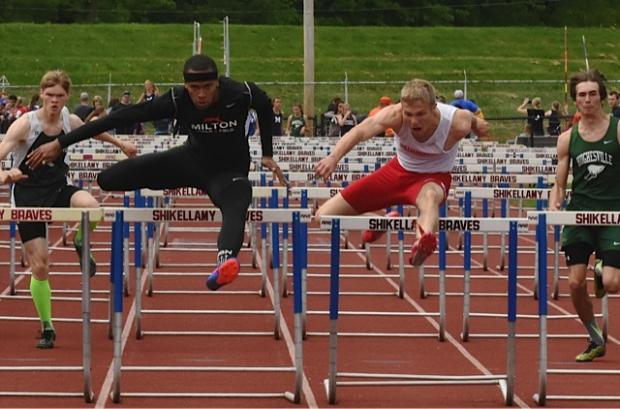 The Milton senior found himself in three of the day's most competitive races.

First in the 110 hurdles he had a matchup with  Conner Oldt who is from Class AAA Williamsport. The two had identical 14.61 season bests coming into the meet.

The finals were anyone could have hoped for with the two matching each other hurdle for hurdle until Oldt knocked the final hurdle. Nieves won with a PR of 14.47 with Oldt coming in at 14.58.

"It was the race I was looking for," said Nieves. "It was fun and challenging."

The Black Panthers senior then turned around and ran the 100.

The 100 looked to be the boys race of the day with defending AA champion Jahvel Hemphill and AAA medalist Brian Zimmerman scheduled to run. Hemphill turned out to be a no-show but Zimerman and Nieves were running even until the Mifflinburg runner tried to pull ahead and instead pulled up.

Switching the 300 intermediate hurdles for the 100 this year is something that the senior has wanted to do for awhile.

"We've been talking about that since last year," he said. "It was a good time to do it."

Nieves also ran anchor on the 400 relay (Raf Rodriguez, Eric Wilt, Josh Guthrie, Nieves) that clocked in at 43.98 despite a bad handoff.

And the Milton quartet of Coy Guffy, Nieves, Guthrie and Tyler Leeser won a hotly contested 4x400. Their time of 3:28.57 is currently third best in AA.

"The key was that we had four guys that ran real well," said Leeser. "I'm definitely excited for districts."

Lewisburg (Tyler Gerlinski, Tommy Bhangdia, Dylan Farronato, Andre Permyashkin) finished came up with a 3:29.47 in the race putting them at No. 8. 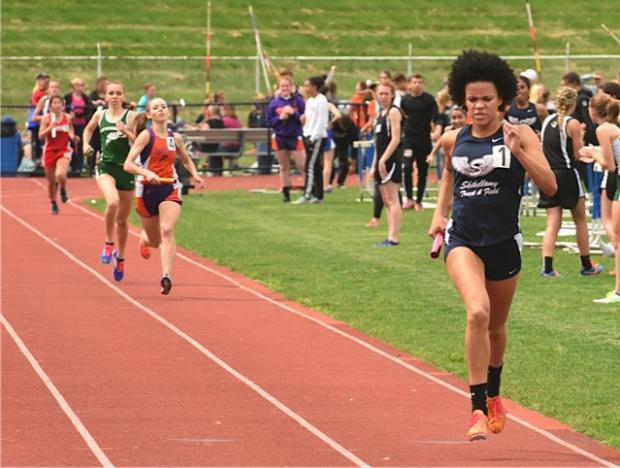 Both the girls and boys had hotly contested 3,200 relay races.

Lewisburg proved to have the strongest opening legs leading after the first two handoffs. By the third leg the final three had tightened to Lewisburg, Danville and Shikellamy. But Shikellamy's third and fourth leg were the Cedeno sisters - junior Yogangelys and senior Treicy. Though both have had more than their fair share of injuries, keeping them from state recognition, the HAC runners were well aware of how deadly they are when healthy.

Fortunately for Lewisburg's Graham she was unaware she would be racing Yoangelys until 200 meeters into her leg.

"I didn't even know until she was coming behind me and I heard people yelling," said the Lewisburg senior. "I tried to get out faster."

Graham kept it close and was rewarded with a season best split.

But nothing was getting in the way of Treicy who led her team to a 9:37.06 finish with a PR split.

"Each one of our legs did amazing today," said the Shikellamy anchor.

Danville finished second (9:40.88) by virtue of a determined Jones.

"I went out fast which was not the smartest," said Jones.

And after the first lap Jones was only in third place.

Though unable to catch Cedeno, Jones did track down Lewisburg's Martin in the home stretch.

Now Shikellamy and Danville have to battle for the one guaranteed AAA berth to states out of District 4.

Both teams have their eye on the 9:35 state qualifying time to ensure a Shippensburg appearance.

"We don't care if we're first or third," said Danville's Maffei. "We just want to go to states."

"I'm pretty sure if we keep going strong like we did today we're going to states," said Treicy Cedeno.

In the boys race Williamsport (Jared Thompson, Cam Dickey, Hamyre Cannon, Tristan Connor) was the clear favorite and the quartet did win in its best time of the season(7:58.56) which vaulted them to AAA No. 8.

Lewisburg stayed in the AA top 8 with a No. 6 ranking and Danville is No. 7.

Green Dragons opener Bhangdia had a strong leg with a personal best split.

"I felt really good during the race," said Bhangdia. "I think we all are pushing each other really hard."

Permyashkin, like Bhangdia broke two minutes on his split, which he attributed to getting his race a bit more under control. 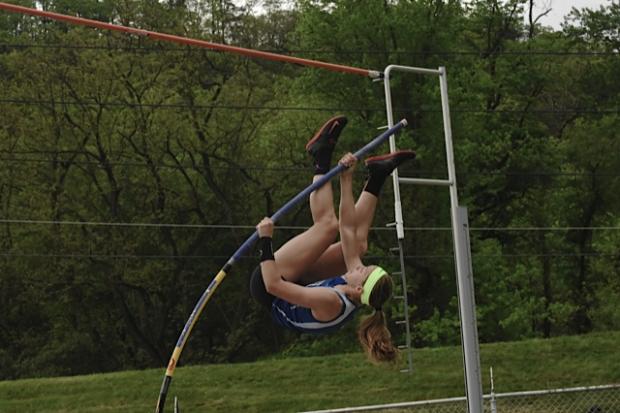 Saturday was an iffy weather day and the timing of the rain worked against both Mount Carmel's Fiamoncini in the javelin and South Williamsport's Jones in the pole vault.

The junior had one especially good attempt at 13-0 but came up short, which is never what someone like Jones likes to do.

"My goal is to PR at every meet," said Jones.

And she definitely has set her sites on a particular PR that is one inch over the state AA record.

Also competing Saturday were AA No. 3 Erika Thomas and AA No. 8 Morgan Johnson. Both cleared 10-6.

While the rain had pretty much let up by the time Fiamoncini was up in the javelin, the water had taken it's toll on Shikellamy's grass runway. But ever the optimist, the Mount Carmel junior took heart in her winning throw of 145-6.

"Today knowing it wasn't a nice day out (and still throwing 145) it gives me more confidence," said Fiamoncini. "If I can get a nice day at districts, I think I can do something special." 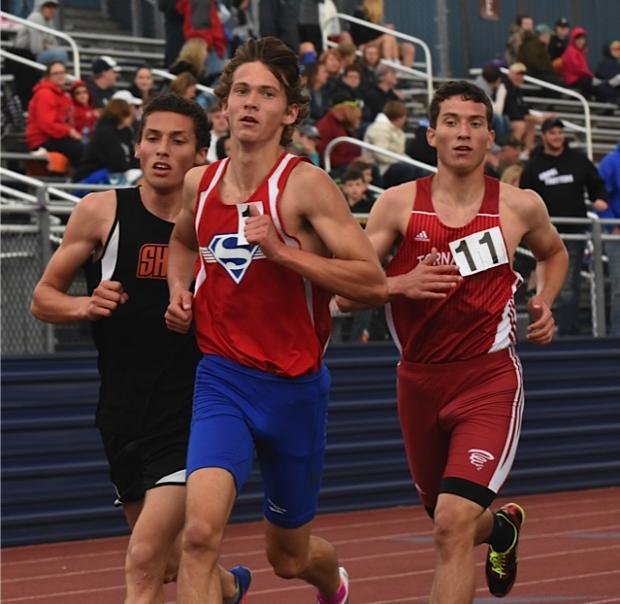 He wanted to break the Mount Carmel school record.

Which he did, finishing second to Selinsgrove's Brody Beiler in 9:35.27 which is now the tenth best time in AA.

Regardless the senior is done with the 3,200.