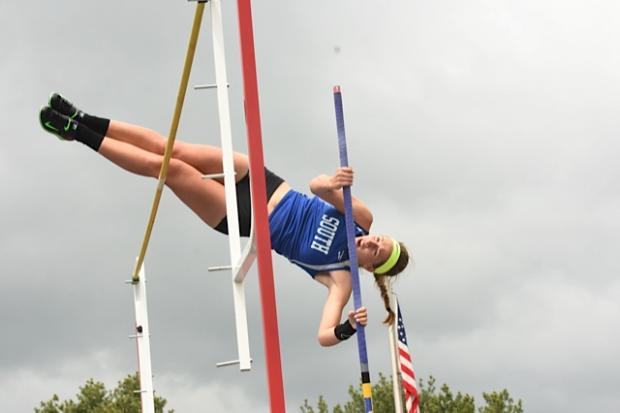 WILLIAMSPORT - The powers that be in District 4 tried to avoid Mother Nature last weekend when they moved the one-day AA-AAA meet from Saturday to Sunday. But Mother Nature had the last laugh holding onto the bulk of its precipitation until Sunday.

The difficult conditions no doubt affected athletes on the margins of making a state qualifying mark and may affect the seed of those competing this weekend.

But some athletes were undaunted.

Jones, the AA No. 1, came in at 11-6 and then moved to 12-3 - which broke the old record of 11-9 - and proceeded to clear her winning height. At that point the heavens unleashed a downpour but undaunted Jones had the bar raised to her PR - 13-3. Though three misses followed Jones was satisfied with the quality of her attempts.

"That was cool," said the South Williamsport junior of her new district record.

Prior to Penn Relays Jones had said that she wanted to peak at that event and then peak again at states. Sunday she said she felt in good position to accomplish the later on Saturday morning.

"I have confidence I can get 13 at states. And 13-6 (the AA record) is definitely something I've been focusing on.

"I'm really looking forward to states. It's going to be fun."

As far as Fiamoncini - the AA No. 2 javelin seed -was concerned, Sunday wasn't a day to think about a district record.

"I didn't really pay attention to it," said the Mount Carmel sophomore. "I knew the conditions were supposed to be bad.

"The delay (of a day) was rough. I didn't think they could do that."

"I'm definitely happy to have that," said Fiamoncini. "That was the goal coming into the meet last year." 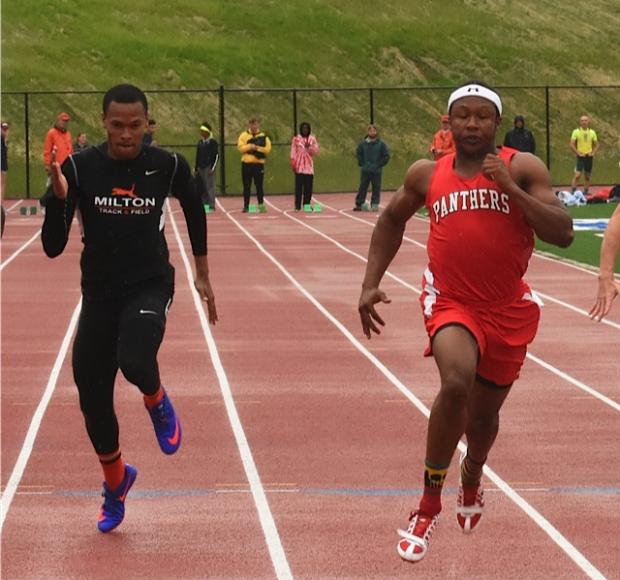 Jahvel Hemphill, the 2015 AA 100 gold medalist, has been hard to spot this spring.

"I've had quite a few injures," said the Bloomsburg junior. "I've been trying to come back and run a safe race."

"This is the first time (this season) that I've felt so good," said Hemphill

The AA top seed was definitely looking forward to the contest.

"I was excited to race him. He's got a really good stride and he was right with me at the start.

"I like how this sets me up for states."

The Milton crew of Raf Rodriguez, Eric Wilt, Josh Guthrie and Nieves got even in the 400 relay.

"I wasn't going to let him beat me again," said Nieves who is the fourth seed in the 100.

Guthrie's third leg was key as he handed his fellow senior the baton in first place and Nieves brought it home for the win (43.44). Bloomsburg finished right behind (43.58.) The two are seeded sixth and eighth respectively.

"I'm so happy for my teammates," said Nieves.

The Milton senior has a challenging dance card this weekend going back-to-back in the 110 hurdles - where he has the fastest AA time in the state - and the 100.

Sunday in some of the day's nastier conditions Nieves won the 110s in 15.01 and as a result in seeded fifth.

He knows it will be a difficult double. 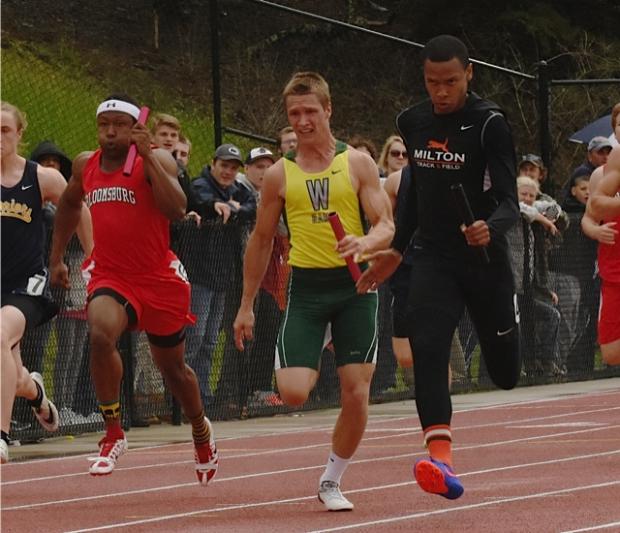 Could Milton contend for the AA boys team title?

The Black Panthers, who won the district plague handily, will need top finishes from Nieves and the 4x100 as well as their 4x400 relay (Coy Guffy, Nieves, Guthrie, Tyler Leeser).

It would be quite the accomplishment for a school with a cinder track where athletes like Nieves don't even practice the key portions of their events.

"When we had a dual meet on an all-weather surface we worked on starts ahead of the meet," said Nieves. 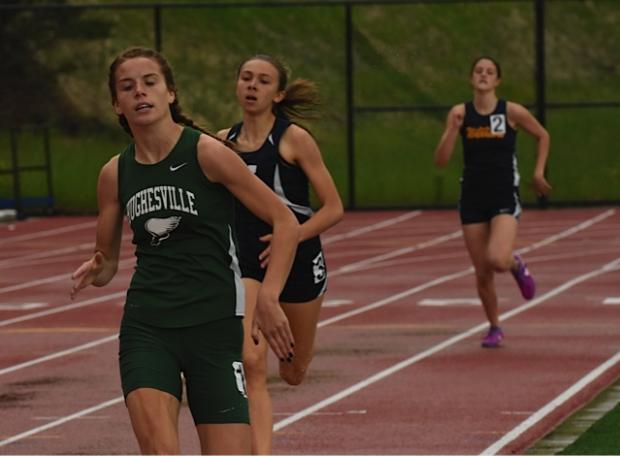 Mifflinburg's Jillian Miller came into the race Sunday as the third seed having finished seventh at the PHAC meet a week prior.

You could say that the sophomore learned from that experience.

"I knew I had to get a strong start," said Miller. "My start at leagues was awful."

She also had her coach's marching orders.

"I was told to stay with (Hughesville's) Autumn Avery (the top seed). She's awesome."

That proved to be difficult as Miller said, "I felt that wave of exhaustion going into the second lap."

But coming into the home stretch, "I thought, 'You know what? I might as well see if I can catch her.'"

And with a kick she didn't know she had Miller bested Avery at the line for a four-second PR finish of 2:18.67. Avery finished in 2:18.79. The two are seeded fifth and sixth in the AA field. 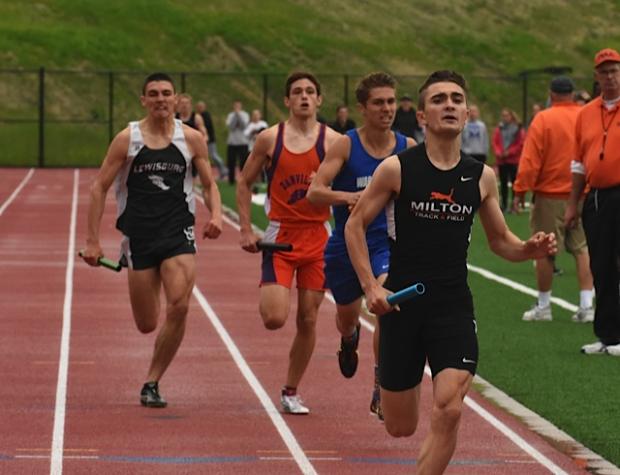 Gone for the Lewisburg girls is mid-distance standout Jenna Farmer. This year, veteran coach Jonathan Clark said, there would be no standout to bail the team out.

Martin said Graham was key to the team's performance Sunday.

"Allison got me a really good lead so I didn't have to kill the last 200."

"It's a really good feeling to know we're going to states," said Baily.

The Lewisburg girls are seeded fifth.

On the boys side the Green Dragons were hoping to win in a state qualifying time but the 8:02.89 was not something that Joey Bhangdia, Anthony Bach, Harrison Gronlund  and Andre Permyashkin knew they had in them.

"That was an incredible time for us," said Bhangdia. "(Our coach Mark Sundberg) wasn't even expecting that."

By all accounts it was the relay's slowest leg, Gronlund, that made the difference.

"He dropped three seconds from his best time," said Sundberg.

"I didn't feel it till the last 60 meters and then I hit the wall.

"But it didn't end up mattering."

With that effort Lewisburg pulled along Warrior Run (8:05.03) and Mount Carmel (8:10.72). The District 4 trio is seeded third, fifth and eighth respectively. 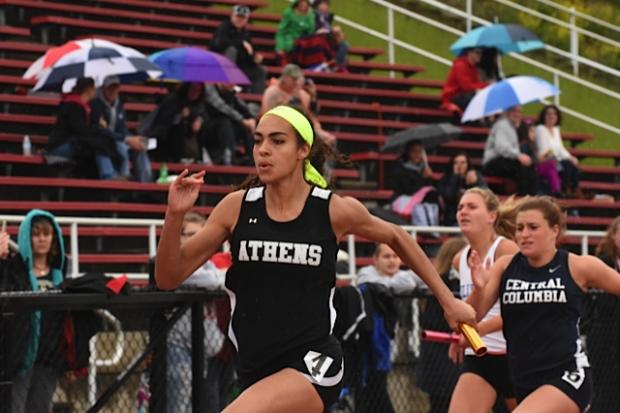 With a PR of 18-8.25 in the long Gambrell enters the weekend as the top seed.

"We've been working really hard in the 4x100," said Gambrell. "I think we have a great shot at medaling.

"I hope to win long jump again and avenge (last year's silver medal) in the 100."