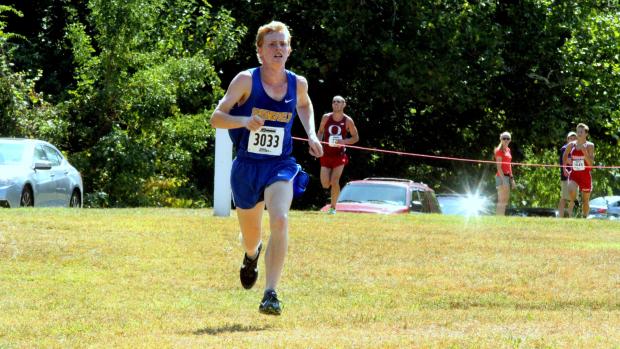 A cool morning turned into a hot afternoon at Belmont Plateau, but some big performances still rolled in at the Briarwood Invitational in Philadelphia.

To start the day, Pearl River's Mary Borkoski defended her title in the Division II race. The sophomore was faster than a year, coming down from New York to win in 19:35. From the gun, Borkoski took it out hard as she says she always does and no one was catching her from there. Despite competing in the DII race, her time was the fastest of the day. Her Pearl River team won with 46 points. She talked about her race and her goals with us afterwards.

Next up was the Division I race, which saw a new champion in Kelly Jawork of Abington. The senior has battled injury for most of her XC career, but she's healthy now and it's showing. She went sub-5 this spring in the 1600, and she ran away with the DI race in 20:35, her first career invite win. Interview below. Central Bucks East took the team win comfortably with 34 points. Hannah Morris in her first invite of the season led the way for the Patriots, taking third in 21:07

The main event came next, but only five teams were featured. The battle would be between O'Hara and North Penn, but both squads weren't at full strength. O'Hara was without its #1 and PA#6 Olivia Arizin, and North Penn was missing some pieces. O'Hara still came out on top, winning by a mere three points over North Penn. The Mancini sisters led the way for the Lions, with Christine taking fourth, Elizabeth fifth, and Eleanor sixth. But up front, it was North Penn's Ariana Gardizy. She had an early challenge from CB West's Megan Kolbe, but Gardizy broke away and ran away with the win in 19:46. That marks Gardizy's second win in as many weeks after winning at Abington last week. Kolbe was impressive, taking second in 20:09.

The championship boys race was slated as the first great team battle for the early season. It lived up to the billing in many respects. PCL/District 12 rival Cardinal O'Hara and LaSalle clashed in the first of many matchups and round one went to O'Hara. The Lions, led by Ryan James used a very strong top three to score 71 points, just ahead of Indian Hills (NJ), which scored 74, and LaSalle at 76 points. Gavin Inglis and Patrick James were key in the O'Hara win. But LaSalle certainly won't go away quietly this year. Council Rock North was without some key members on Saturday due to injury and illness, while Central Bucks West's Ben Smullen raced in JV. We maybe got a few answers on Saturday, but the state situation is still quite muddled in PA.

Springfield (Delco)'s Liam Galligan continued to amaze on Saturday, pulling away from James and Neshaminy's Rusty Kujdych in the final half mile to take the win in the championship race. Galligan won at Abington last week and then again this week, marking his first two career invitational wins. Maybe not so quietly, Galligan is staking a case for a VERY high finish in hershey come November. James was second in 16:15 and Kujdych was third in 16:16. Here from Galligan below:

In the Division I race, Haverford Township's James Abrahams followed up on a nice race last week with another solid performance on Saturday. Abrahams took out the DI race hard, putting a big gap on the field in the opening mile. The field came back somewhat, but Abrahams' lead was enough that he still won fairly comfortably in 16:57. Central Bucks East's David Endres and William Schulz went out very conservatively, running in a pack with teammates, but the pair closed hard to finish second and fourth respectively. Abington's Christian Troemel was third in 17:14. CB East took the team win (their third win in three weeks!) with 40 points over second place Twin Valley (70 points).

Haddonfield Memorial's Derek Gess took home the win in the Division II boys race. Gess ran 16:53 for the win, pulling away from Malvern Prep's Peter Borger later in the race. Borger wound up second in 17:00. Haddonfield won the team race with 56 points. Holy Ghost Prep was second with 78 points. Callahan Lennon took third in 17:24 for the Firebirds.