BLOOMSBURG---The District 4 Cross Country Championships held at Bloomsburg University October 26 were not just contests for the best in north central Pennsylvania. They were also a preview of how PIAA-championships ready some of the state's highest ranked runners and teams were.

The girls Class A race showed that Warrior Run's Lauren Trapani is no fluke as the freshman cruised to her first district crown in 19:04, a full 85 seconds ahead of Wyalusing's Hannah Corson. The five freshman and one junior behind Trapani also showed they were ready to give to the PIAA A team title a run, whooping the 2016 champions Troy 32-88.

Class AA girls got a sudden infusion of individual talent literally minutes before the starting run of their race when Loyalsock was unexpectedly moved from A to AA. That meant the 2016 district A champ Isabel Sagar became the immediate favorite and she didn't disappoint, winning in 19:06. Though Danville's runners would have liked one of their own to have that individual medal, the Ironmen were once again dominant in the team competition beating the other state-qualifying team, Lewisburg, 36-72. 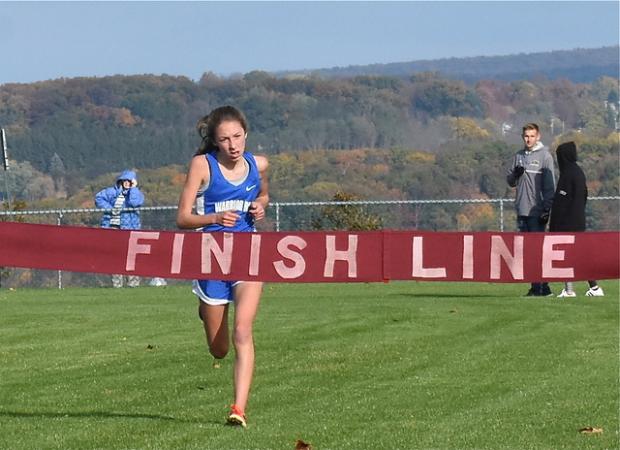 Trapani and her team are for real

When Trapani laid down her 17:41.40 at the 19th Annual Bear Mountain River Run at the beginning of the season, the question was - is this a fluke?

The freshman's performances of the season answer for the soft-spoken first-year runner.

Trapani's biggest challenge competition-wise and mentally was at the PIAA Foundation race in September when a mix-up at the start of the White division race sent much of the field including Warrior Run into the Blue Division.

It turned out not to be a problem as Trapani premiered her high-school kick beating Eastern York's Maddie McLain by two seconds.  (In the official results the two were reshuffled into their correct divisions with Trapani winning the White race in 18:56 and McLain taking the Blue in 18:58.)

Trapani also dominated Sagar over the course of the season beating her at a quad meet by 90 seconds and by a smaller margin at the Shikellamy Boosters Classic, the league meet that leads up to districts.

Though Trapani takes every race out hard and works to hold the pace, the last-minute removal of Sagar from the A field may have taken a little intensity away from her race.

"It was a relief," said Trapani. "Obviously going into the race I was expecting (Sagar) to be there.

"I guess I didn't feel as much pressure.

"(The race) went OK but it's definitely not my best time."

But the district goal for Trapani was more able her team than herself.

"(The individual district championship) is a good accomplishment," said Trapani. "But it's our team accomplishment and our team had a really good race today."

Lauren's cousin Cameron Trapani was third with a PR of 20:29. just

The Warrior Run girls belied their youth placing second at the PIAA Foundation race but may be a year or so off in contending the PIAA A team championship - or not.

"I still think they're running a little clueless," said Dufrene. "They're just so competitive that group, it's really exciting.

"They enjoy each other, they're a tight-knit group.

"(Today) they saw they could do something special together and it paid off."

Villa Maria Academy has been a tough nut for the Iromen to crack.

Veteran coach Jeff Brandt said his team didn't have its "A" game in September at the PIAA foundation race where they were bested by 106-92 by Villa.

And the Ironmen have been wrestling with injuries resting first District 4's AA silver medalist Elaina Klinger at the Northeast Invitational and then Marisa Maffei at the league meet.

Thursday Danville was still without its absolute top-7 and Maffei was still feeling the lingering effects of bronchitis.

Junior Klinger finished in 19:40 while freshman Grace Petrick (21:07) was the last scorer across the line.

"I thought we ran real well today," said Brandt. "Our grouping keeps getting better and that's the key."

Klinger was one of the Danville runners ready to contend for the individual gold but that all changed when Sagar got bumped into the AA field.

"It is what it is," said Klinger. "Today was thing to see what I could do and to push Emma (Mikta), push Marisa (Maffei), push the entire team."

"Personally I think I pushed it harder than I've usually been," said Mikita who took third (19:41). "I'm proud of that and proud of the team today."

"I'm still getting over bronchitis," said Maffei who was seventh (20:16). "This race I didn't do the best I've ever done (but) it gave me confidence that I can go to states and run well."

"Grace has been phenomenal," said Brandt. "It's the closest she's been to Niki all year."

"It's a great team," said Petrick. "I'm pretty excited to go to states."

"It's why we're so successful as a team," said Haas. "We just want to have fun with it."

"Whether we're the runners-up or winners it will be great," said Klinger.

Their coach though likes their chances to be the later.

"We had a couple of people injured - if we get them coming around - and even without them - we can contend for best in the state," he said. 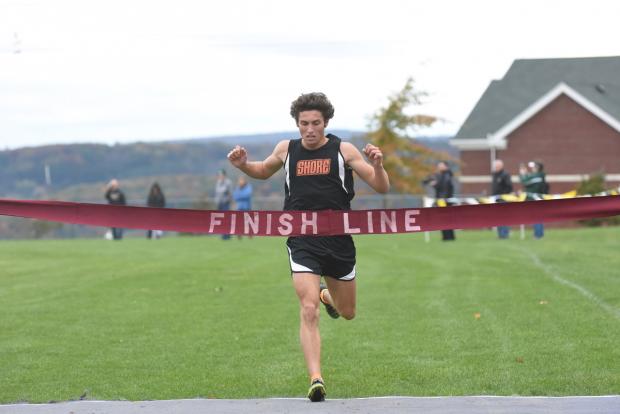 Brandt said the boys AA field was as good as he's seen and the veteran coach has seen quite a few of them.

With a tight team competition going on behind him Davis separated himself early and never looked back dashing the hopes of Serfass to defend his 2016 crown.

As the winner of the PIAA Foundation Blue race (16:01) the 'Shore senior is looking like the runner to beat on November 4.

Last year at districts Davis was fighting sickness and finished sixth. Thursday, he wasn't going to let anything stop him.

"(Serfass) won last year and I was happy for him," said Davis. "He wasn't very close to me at Shikellamy and he wanted to keep with me today.

Not being in perfect condition didn't matter.

"I felt a little tired but sometimes you have to work with it."

Davis won't be surprised if the two aren't racing each other come states.

"Just what he did today makes me think he'll be right there with me."

"I'm going to give first my best shot but right now I'm focused on my training."

The idea was to defend his title but that was not in the cards Thursday.

"I'm tired with a little headache going on," said the Lancers senior after the race, joking. "Maybe focusing too hard."

The mental had been, by his own admission, a factor in racing not just Davis, but in general, this season.

The two slapped hands after the district race and though he fell short of his goal he felt ready to challenge at the PIAA championships.

"I want to give the state gold a run," said the Temple-bound runner. "I was feeling pretty good today - it was mostly mental - (but he deserved that race).

"I think if Isaac is close to first, I think I can give it a run for the top three."

Fittingly he was one of the program's first runners.

"Four years ago I had four guys running and one girl," said Loyalsock coach Nicole Reed. "This is our school's first running district championship in anything."

Out front all year as well as Thursday were Serfass, Ryan Sullivan (third, 17:05) and Alejandro Quintana (sixth, 17:08). With strong challenges looming from Warrior Run and Milton, the question was what would the Lancers fourth and fifth runners do.

It turned out just enough.

"This team title was won with our fourth and fifth guys," said Reed.

"I ran a course PR," said Reed. "We worked on speed this week and it helped me a lot. It prepared me for this race."

"That our program went from nothing to district champs is amazing," said Nickolaus."

"I was really focused on what I had to do," said Quintana. "I'm excited for states and a little nervous."

For Sullivan it was a reminder when at first you don't succeed, try, try again.

"I started high school cross country my sophomore year," said the Loyalsock senior. "I was really bad in eighth grade.

"But we had such a small program so I thought if I could help I would.

"We grew our team and everybody worked." 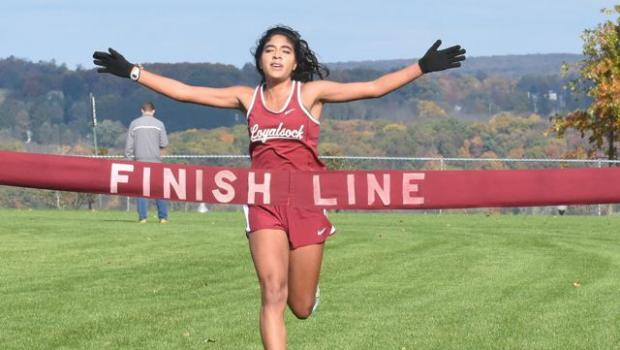 So this is not a changeover year for PIAA classifications.

But Loyalsock was evidently wrongly placed in A last year.

But when it sunk in that the Lancers girls would be moving to the AA race Thursday, Coach Reed quickly realized it would work to her junior's advantage.

"There was a little serendipity for everyone here today," she said. "Apparently they had us (in the wrong classification) last year.

"Okay, and then Isabel was able to take the district AA title and our team finished third."

"That was crazy," said Sagar. "We were lined up and totally prepared to run this race against Warrior Run. Then we saw our box was in AA and our jaws dropped to the floor.

"Our coach was fantastic. It was unexpected but it was a great race. It was humbling."

And without having to physically chase Trapani, Sagar found it relatively easy to finish just two seconds behind her time, winning in 19:06.

"It's interesting how your mental state affects you," said Sagar. "When I was racing Trapani my mental state isn't where it should have been.

"It was a relief (to be in a different classification) but I do like the competition.

"It was nice to bring home the district championship."

Knoebel and Mount Carmel the class of boys A

Despite his top seeding Knoebel was leaving nothing to chance Thursday.

"Going into the race you want to think positive - being the district champion is the goal," he said. ""But I did know two guys from Wyalusing and one from Wellsboro were out there.

"You can't take anyone for granted."

Indeed Wellsboro's Aidan Perry made a great pass at the end of the race to beat one of the Wyalusing runners and finish just four seconds behind Knoebel's winning time of 17:11.

"I finished third last year," said Knoebel. "To come back and win is really special."

"I thought it was a good race for the whole team," said Lapotsky. "It feels great to win districts."