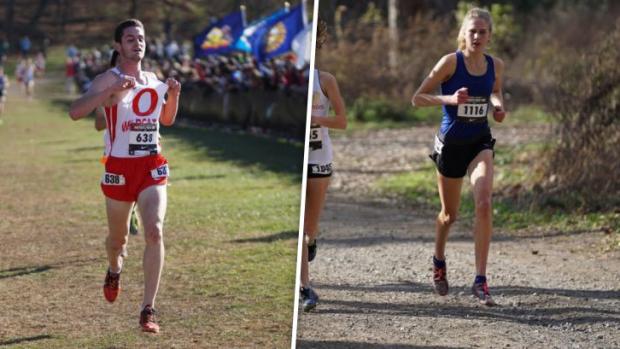 At Nike Cross Regional Northeast, Katie Dammer of Abington Heights took third in the girls' race, while Liam Conway of Owen J. Roberts was second and Spencer Smucker of West Chester Henderson was fourth in the boys' race, earning a few of the allotted individual qualifying spots to the national meet.

Dammer ran 18:36 on the Bowdoin Park course finishing third behind race winner Julia Robitaille of New Hampshire and Maggie Donahue of Massachusetts. That qualifies Dammer for Nike Cross Nationals. This will be Dammer's first trip to a national meet after she placed 36th at Foot Locker Northeast last year.

The AAA state champions will need to rely on a wildcard bid to get into NXX, which will be announced tomorrow. The Northeast region, however, is rarely granted a third team spot after the two auto-qualifiers. (UPDATE: The NXN at-large bids were announced Saturday night and Fox Chapel was not among the wild-card teams selected)

Two Pennsylvania boys are Portland-bound next week. Conway ran a great race to place second behind the winner, Chris Romero of New Jersey. Conway, a senior, clocked in at 16:02 to qualify for NXN automatically. Smucker also booked his trip to the Pacific Northwest with his fourth place finish in 16:16, so he'll close out his career on a very high note at NXN, too.

Council Rock North's Ryan Campbell placed ninth overall. The senior clocked in at 16:31 and finished eight spots better than he did last year at NXR Northeast. He'll likely just miss out on a individual qualifying spot.

Downingtown West's Payton Sewell led the way for his team, which took ninth in the team race. Sewell ran 16:42 for 18th overall. Tyler Rollins was 24th in 16:46.