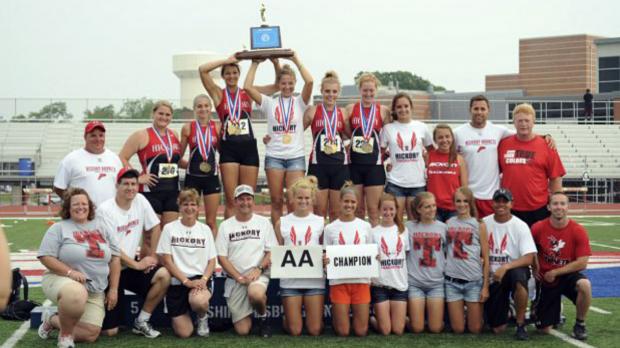 If one were to build the perfect coach, an unquenchable thirst for knowledge and an unwavering commitment to their athletes surely would be vital components of that construction project.

Those who worked closely with Keith Woods in the Hickory track and field program say the veteran throws coach never was in short supply of either of those ingredients. Woods, one of Pennsylvania's most successful throws coaches this century, died Sunday. He was 60 years old.

"Coach Woods was more than just a coach, he was family," said Tori McKinley, a 2017 Hickory graduate and defending state champion in the shot put and discus. "He wanted everyone he came in contact with to be successful. He provided myself and so many others so much motivation and help.

"Every day, he was happily ready to coach and help newcomers or veterans on his team. He made his throws team more than a team, but a family. He put in countless hours on all of his athletes and produced nothing but greatness. He was such a good person, father, husband, friend, and so many other things."

Barb Dzuricsko, who served as Hickory's head coach during much of Woods' 16 years with the team, said his quest for information was unprecedented.

"His persistence in getting the information, workout, technique drill, et cetera from anyone who would listen, respond or call him back was beyond normal," said Dzuricsko, who now serves as Hickory's supervisor of athletics and activities. "Keith would find new drills, new techniques, new training and strength conditioning workouts to help his athletes become better. He took so many videos and pictures of his athletes in practice and competition and posted them for coaches to see . . . not only for recruiting purposes but for learning purposes."

READ MORE:  Throws Are All In The Family For Woods Of Hickory (By Cory Mull, 2010)

Woods helped develop a seemingly endless supply of talented throwers at Hickory, with a total of 17 state titles on his coaching resume. Two of his recent standouts -- Evan Blaire and McKinley -- led another impressive showing by the District 10 power in the 2017 Class AA finals at Shippensburg, catapulting the Hornets to the boys team title and a runner-up finish in the girls team standings.

Now at Auburn, Blaire and McKinley each claimed gold in the shot put and discus, with Hornet throwers also taking four other places in the weight events. 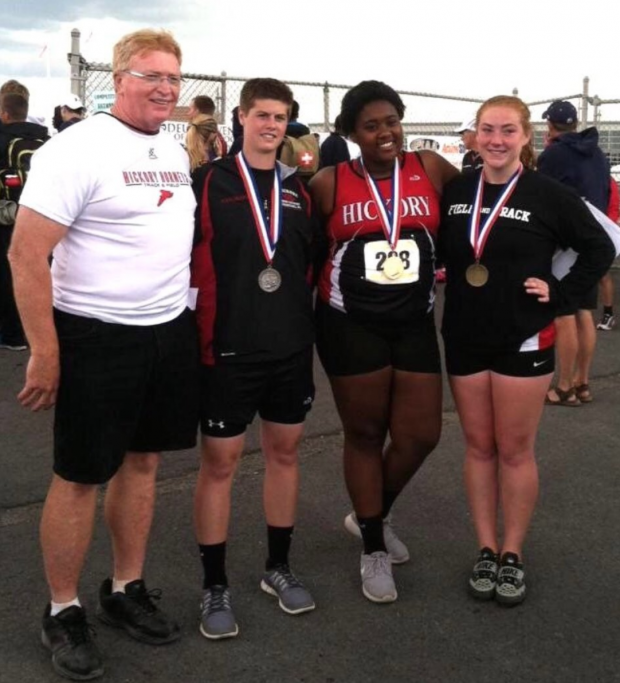 "Our goal was to have district and state qualifiers in every event, and Keith's work behind the scenes learning how to make our throwers better made all our teams stronger," Dzuricsko said of a program restructuring in 2001 that resulted in Woods joining the coaching staff of a combined boys and girls program. "The list of thrower athletes that earned region, District 10, and state medals over the next 16 years is amazing."

One does not have to look back far into PIAA history to view epic performances by Woods-led throwers on the final weekend in May at Shippensburg University.

In 2015, McKinley and teammate Elena Marchand went 1-2 in the discus and then switched places in the shot to lead a Hickory contingent that gathered eight podium places and points in the state finals. Three years earlier, a trio of Hickory girls swept the top places in the AA discus final.

"When I was coaching and he knew the dual meet would be close, he always asked me to come up and tell him and the throwers what we needed to win the meet because he said it would motivate them to throw farther under pressure," Dzuricsko recalled. "The points that his throwers earned were integral pieces of our wins in the 2012, 2015 and 2016 girls state titles and the 2017 boys state title, and the boys 2014 and girls 2011 and 2017 state runner-up titles. One of my most favorite memories of a state meet with Keith is in 2012 when Hickory girls took the top 3 places. First time for that to happen. What a great picture with him and the girls!

"Keith has many 'children' not only at Hickory but all over the state as he has helped others with throwing tips, but his family at home---daughters Erin, Emily and Taylor, and son Ben and wife Donna - have been  important members of our Hickory athletic family. We will be forever grateful for them sharing their husband and father with us. He will never be forgotten."