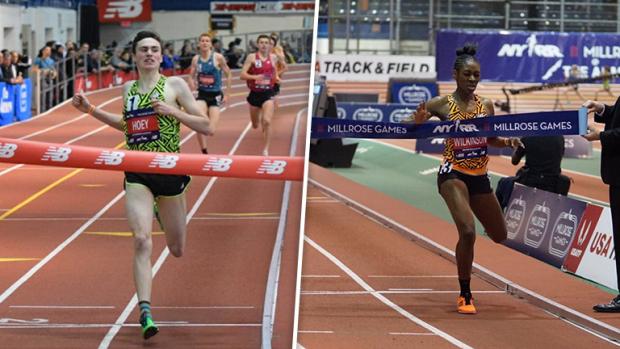 It was a terrific day for Pennsylvanians at the 111th NYRR Millrose Games at the Armory. For a second straight season, PA runners swept the mile, winning both girls and boys titles. Both runners also came mighty close to state records.

A sprinter repeated as Millrose champ, while a surprise relay came through in a big way. We broke down all the action. 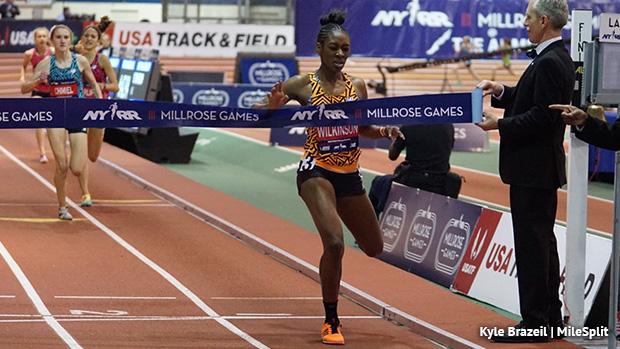 There was plenty of talk about Katelyn Tuohy coming into Saurday's Millrose Games, and rightfully so. But a talented field had other thoughts. Most notably of the bunch, Gabrielle Wilkinson was determined to show that she is the best in the nation.

Wilkinson, a Friends' Central senior and future Florida Gator, ran down Tuohy in the closing laps, and put down a 33.85 second final 200 meter lap to race to the win and a new US#1 time of 4:42.94. It's the second fastest time in Pennsylvania state history, just .36 off Brianna Schwartz's 2014 state record.

Wilkinson was positioned in third for most of the race, before moving up to second with three laps to go. She passed Tuohy, who ended up fourth, on the backstretch. Saratoga Springs' Kelsey Chmiel was second in 4:44.55.

Northern's Marlee Starliper also ran a terrific race. The sophomore placed third in 4:44.97, the fourth fastest time ever by a PA girl. It's also a current US#4. Starliper also hung well in the pack and ran very even splits.

Katie Dammer of Abington Heights placed tenth in 5:00.60, just off her own PA#4 time from earlier in the season. 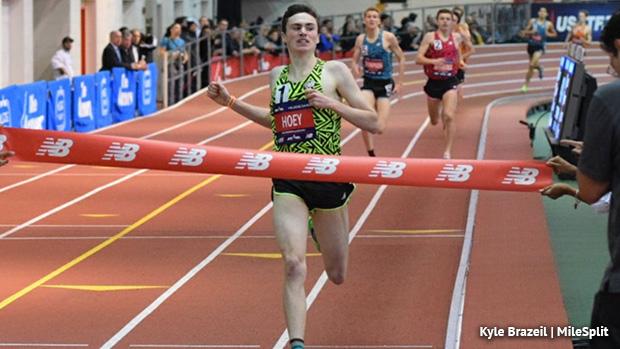 Hoey leaves no doubt about it, runs PA#2 all-time mile

Josh Hoey was waiting to unleash his kick. The Bishop Shanahan senior and University of Oregon recruit bided his time in the pack and took the lead with three laps to go in the Millrose Games high school boys' mile.

Then there was no doubt about it.

Hoey ran the final 400 meters in 57.96, according to The Armory's F.A.T. splits, and finished in 4:07.42 for the win in the second fastest time ever clocked by a Pennsylvania boy. Only Noah Affolder's 4:07.24 from his meet record-setting performance at last year's Millrose Games is faster.

No one could respond to Hoey's move when he decided to go. Dalton Hengst, who transferred to Bishop Shanahan from McDonogh School in Maryland this past week, led through 1,000 meters before giving way to Hoey. Hengst wound up fourth in 4:12.98. Scott Thompson of Tennessee was second in 4:10.63, over three seconds behind Hoey.

Earlier in the day, Tennessee high schooler Brodey Hasty just missed the four-minute mile, running 4:00.05 against pros to better his own US#1 time in the event. Hoey, meanwhile, stays at US#2. 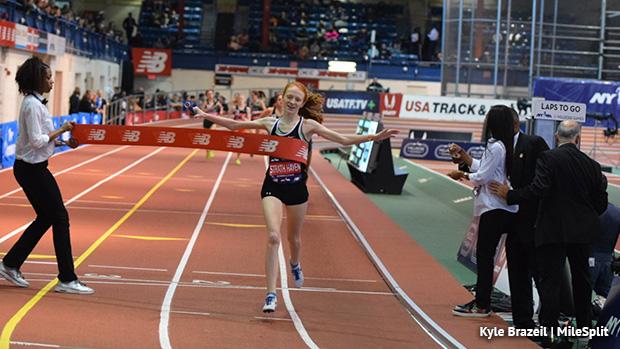 Strath Haven pulls off the upset

There wasn't a whole lot of national hype coming into Saturday's Millrose Games surrounding the Strath Haven girls. Their 4x800-meter relay entered the meet ranked third in the state and 17th in the nation in a field that included three of the top four ranked teams in the nation.

But the lone Pennsylvania team in the field proved it was well-deserving of a spot among the ten team field. Strath Haven went 9:11.19 behind a monster anchor leg from Grace Forbes, who took the team from third to first to take the win.

Strath Haven hadn't raced an all out 4x8 since December 22, when it went 9:31.15 at a DVGTCA meet at Lehigh. Saturday's performance moves Haven into the PA#1 spot by almost 18 seconds. The time also shoots the girls up to US#2. Only Padua Academy (DE) sits ahead of them in the national rankings. 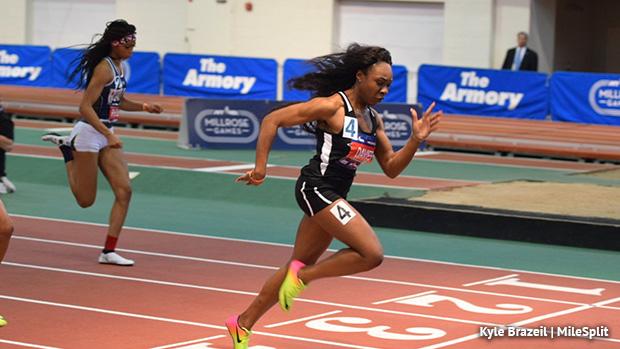 Davies repeats in the 55 meters

Thelma Davies continues to asset herself as one of the nation's top sprinters. For a second straight year, the Girard College junior leave New York as a Millrose Games champion.

Davies took this year's win in dominant fashion, clocking a 6.88 for the victory. Toshel Goffe of Paul Robeson (NY) took second in 7.05. Davies ran 6.82 for the win at last year's Millrose Games.

Saturday's win continues her undefeated season that has included wins at the Burdette Classic, Hispanic Games, Ocean Breeze Invitational and the VA Showcase. Her time of 6.77 in the 55 meters from the VA Showcase remains US#1

A strong contingent of pole vaulters made the trip to NYC and came away with strong performances. Mackenzie Horn of Manheim Township placed third with a jump of 12-9.5. Pittston Area's Abby Norwillo cleared 12-5.5 took fifth overall. Lyndsey Reed of State College (11-11.75) took seventh, while Carena Nottoli of Hempfield (11-5.75) was eighth.

Kristian Marche of Imhotep placed fourth in the boys' 55 meters. Marche, already PA#1 in the event, clocked a time of 6.44, just off his season best and state-leading time of 6.34. Brendon Stewart of DeMatha Catholic (MD) won in 6.34.