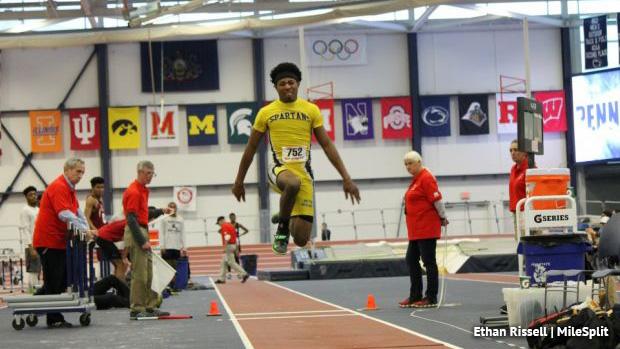 Treyvon Ferguson went quality over quantity this winter in his main event. The Milton Hershey senior has competed just once in the triple jump, but in that one meet, he put down the top mark in the state so far this season. Ferguson leads the field into Sunday with a mark of 48-6.5, and will look to move up from his third place finish in 2017.

But the top returner from states last year is Strath Haven's Dayo Abeeb. He took second last season with a big jump and seems to perform well on the big stage. He comes in ranked PA#4. Imhotep's Akeem Cooper has been on fire lately, jumped 46-11 and then 47-1, a PA#3, in consecutive weeks. Cooper was fourth last season, but should be in the mix for the win.

State College Area is sending three triple jumpers across town to the runway on Sunday. Stanley Hamilton (PA#5), Lance Hamilton (PA#7), and Jake Hefkin (PA#11) will look to ensure there's plenty of Little Lions on the podium at the end of the day.

Others looking to get inside the top eight are Neshaminy's Logan Williamson (PA#6), Williamsport's Keith Jason (PA#7), Pennridge's Ryan Sattelle (PA#9) and, Coatesville's Naheem Moore (PA#10). It's worth noting that Wissahickon's Ahmir Johnson, who is PA#2, will miss the state meet with a hamstring injury.