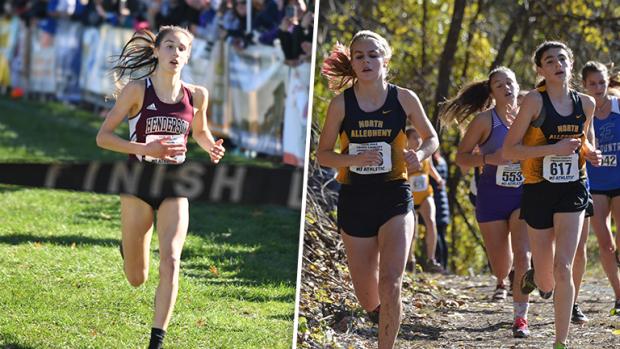 A freshman won the day as Jenna Mulhern became the first ninth grader since Sara Sargent in 2009 to win a AAA individual XC crown. It was all North Allegheny in the team race, as the Tigers returned to the state's top spot for the first time since 1999 with a 41-point victory over second place.

The final girls race of the day belonged to the ninth grader.

Jenna Mulhern of West Chester Henderson was dialed in on Saturday, incorporating her usual race strategy and letting the race come to her. She ran to the win in 18:42, the day's second fastest time, the first of possibly many to come in her career.

Saturday completes a dream freshman season for Mulhern. The newcomer, who has surprised herself every step of the way, started with a win over fellow frosh Olivia Haas of Blue Mountain (fifth in AA on Saturday) at the Unionville 2 Mile Bash. Then she was second to Taryn Parks (second in AA) at Carlisle, before winning at Ches-Monts and then District 1.

Hannah Schupansky of Oakland Catholic took the race out hard. Mulhern hung back in the pack of chasers and caught up to Schupansky around the 2K point. The freshman made the pass and pulled away for the win. Schupansky ended up eighth.

State College's Kileigh Kane came across second. The senior DNF'd in a number of races this season, battling injuries. But Kane returned to win the District 6 title before taking silver at states on Saturday in 18:55, her fastest time of the season.

West Chester East's Allyson Clarke was third in 19:05, North Allegheny's Hannah Lindgren was fourth in 19:15, and Fox Chapel's Sarena Seeger was fifth in 19:15.

The team race belonged to North Allegheny. The Tigers had 3 medalists and 4 in the top 27 to score just 65 points, the lowest score posted by a AAA team since 2015.

Hannah Lindgren led the way for the Tigers with a fourth place finish up front. Sophomore Keeley Misutka (12th) and freshman Rachel Hockenberry (17th) provided a big lift, also leaving Hershey with individual medals. Caroline Daggett was 27th and Maura Mlecko was 43rd to wrap up the decisive team win for NA. All 5 scorers from the state meet return next season, too.

West Chester Henderson had a strong showing, taking second with 106 points. Jenna Mulhern earned the single point for her individual win and the Warriors also had two other individual medalists with Courtney Kitchen (19th) and Courtney Alexander (21st).