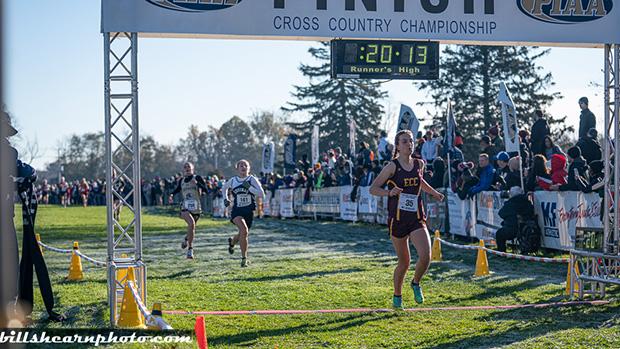 It might be too early to pick favorites at the state level, but we want to give you the rundown of individuals/teams to keep an eye on heading into the early season. There is no doubt that many individuals and teams are worthy of being on this list, but we have picked a few that we would like to highlight.

Earlier today, we released a list of our Girls Top 250 Returners from PIAA 1A. That list compared runners on the same course to give a more accurate objective ranking. Check it out HERE.

Kate Korty may stake her claim as one of the state's best cross country runners over the next three years. As a freshman, she finished third at the PIAA 1A State Cross Country Championships. She is the top returner on our rankings and added a 5:08 mile this past spring.

Grace Neubert ran an incredible race at last year's PIAA 1A Cross Country Championship to finish fifth. She ran a 22-second personal best, 20:13. She is regarded as one of the toughest runners in the field, and as the second highest returner from last year's championship, she should enjoy another strong season and is on the top of our list of one's to watch this year.

Rising senior Lacey Danilovitz enjoyed a stellar outdoor track season for Riverside (2). She improved her 3200m time by 42 seconds year-over-year and placed fourth at the state championship meet in the event with a time of 11:01. She returns with one of the top 3200m personal bests in the state, and it will be interesting to see if that speed translates to the cross country course.

Kate Moncavage (Southern Columbia Area) finished seventh at last year's state championship. She owns the second fastest returning 5k personal best, with her 19:16. Since cross country, she has focused almost exclusively on the 800m race distance. She has raced the event 14 times throughout Indoor and Outdoor, becoming a mid-distance specialist.

Rather, she may be a middle distance expert as she won the PIAA 2A 800m State Championship this spring with a 2:15.92. A solid early season may result in gold if Moncavage can stay in the running down the stretch.

We would be remiss if we failed to mention Willow Myers (Mercer Area). She finished ninth at the state meet in 2021 and returned with one of the top times in the state. She finished top-five in the 3200m and 1600m State Championship races this May. She will slot right in with the other girls mentioned.

At this point, the chase for the individual crown is a wide-open race, and it will be fascinating to watch how these girls stack up after early season duals and invitationals like PTXC 13, where some of the state's finest expect to duel.

For a better understanding of our breakdown, check out our Top 250 Girls Returning to PIAA 1A based on their times at Hershey.

Pack work is the key to winning. The Reigning Champs know how to use a solid pack to win races. Notre Dame Green Pond won last year's championship without placing a single runner in the top forty. Instead, they put their top four within five seconds of each other in a masterful display of strategy. They scored in the 17th-20th point spots on their way to a dominating victory.

Notre Dame Green Pond will be led by three juniors, Lauren Bower, Olivia Schweitzer, and Katherine Koons. If they can run together and move up the board, they may be able to hold on for a repeat at the end of the year. Until then, it will be critical to establish their four and five runners at the beginning of the season.

Mohawk returns its incredible crop of young runners. Its top six return for redemption after finishing runner-up to Notre Dame Green Pond last year. Natalie Lape carried the low stick for Mohawk, scoring just five points at the state meet. With that in mind, it will likely be an early-season goal to establish a pack after Lape.

Marion Center Area and Our Lady of Sacred Heart are neck and neck on our list of teams to watch. Marion Center Area returns two runners who have gone sub-21 minutes over 5k in Lydia Miller and Reagan Ryen. Both are ranked within the top 25 of our returners in PIAA 1A. Behind them, Mikayla Gatskie, Brynnley Haggerty, and Maggie Hood are ranked in the top 115, signaling a potent pack for the contingent.

Yet, we can never discount the hard work these girls have put in over the summer months, and we may see drastic sways in projections over the next few months.