There are now medals available for others - the last Hibbs has taken home hardware in XC.

No one expected North Penn to take AAA boys. But they did. They practiced for it.

There are now medals available for others - the last Hibbs has taken home hardware in cross country.

He knows this more than most. In fact, he was taught this at a very young age.

On Saturday, the Hibbs' family reign on the PIAA finally ended, with Sam grabbing his second consecutive medal at the state level. He finished in 16 minutes, 23 seconds, good for 13th place.

Photo at 4600 meters by Marleen Vandenneste 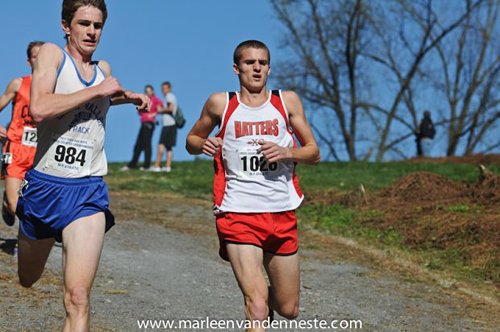 "Sam is an incredible runner," Hatters head coach Russel Coleman said. "He's worked extremely hard. He has been, without a doubt, the lead-by-example captain. Throughout the season, he was out there every day, working incredibly hard, going for the win and pushing his limits."

Good thing for Sam, he has plenty of shoulders to lean on.

Overall, each of Sam's three older brothers have also earned medals at the state level -- with the next oldest, Seth, achieving his mark in track & field.

Seth Hibbs is currently a sophomore at Millersville University, where he competes for the Division II Marauders. Dan Hibbs, the next oldest, is a grad student at Liberty University and ran for the Flames, too.

And Josh Hibbs, the oldest of the four, is currently a volunteer assistant with Iona University.

"It's pretty cool to come from a family where everyone has medaled," Sam said. "It's kind of weird being the last one, finishing it off and leaving your career and knowing there is no one else to carry on the legacy."

Hatboro-Horsham might not soon forget about the Hibbs family, though. 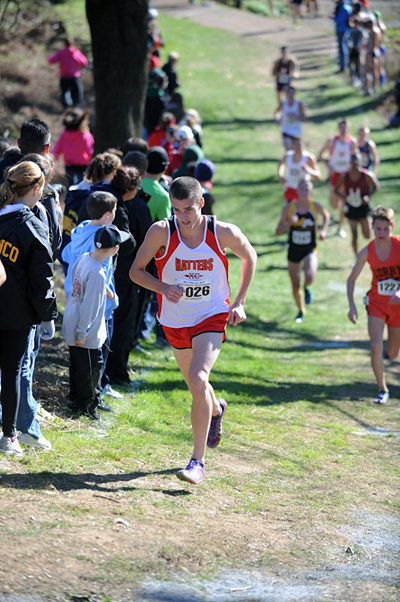 It would be hard not to.

Former Hatters head coach Bob Ayton, who currently volunteers for William Tennett, coached all four boys during his time with Horshma. There's one thing they all had in common.

"I think part of it is their parents are strong," Ayton said. ""They're strong Christians, strong encouragers and when you have a good program and parents supporting them, these kids will succeed."

Even through a bad race.

"Having people in your family who know how to run helps a lot because they can always give you advice," Sam said. "They know where you are, they know what it's like to have a bad race."

Being the product of a running family, there are some obvious benefits. Like having a gamut of knowledge and information at your every whim.

Josh, for example, was at the race on Saturday and may have offered a few words for his brother, who got caught up in the middle of the field early and had to play catch-up the rest of the way.

“In this course, when you get caught, it's really hard to make up that ground,“ Sam said. “Everything felt fine. My legs felt good and I felt good. I just couldn't make up the ground that I lost.”

So to blow off steam, who was right there by his side?

Family is there for you, when you need it.

"It's good to have someone to talk to like that," Sam said.

HERSHEY -- To be fair, North Penn senior Megan McGovern has won pivotal races in her career. 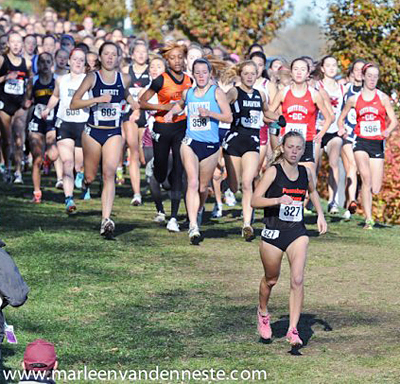 That all changed in a matter of 50 meters.

The North Penn senior, who was eighth as a sophomore and fifth as a junior, bottled up a fierce kick when it mattered most and claimed her first state title with a time of 18:28, passing Strath Haven senior Hannah Grossman in the final meters.

It was a new course record -- broken minutes after Homer Center's Angel Piccirillo had secured the new mark herself.

"That's a feather in her cap," North Penn head coach Jim Crawford said. "She's done well in other meets throughout. She ran in Delaware and ran a course record there, which was something special. She's won up in New York three years in a row. Of course, there's nothing like a state championship."

With her high school career nearing its end with less than 200 meters to go, McGovern found an extra gear. And don't be fooled by her generally perky demenoar. This focus was decisively specific.

"I thought about every time in practice, I would push it a little more," McGovern said about her kick. "I wanted to win so badly, so at that point it drove me to the finish."

Crawford mentioned something to McGovern on the final incline. 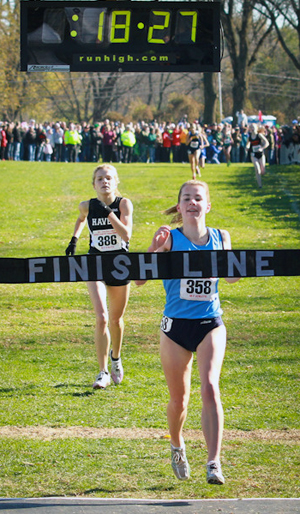 District 1, in general, has been tough on McGovern. Featuring some of the best distance running talent in the state, McGovern routinely races foes with similar talents and abilities.

On Saturday alone, the top four placing teams in Class AAA were from District 1 and it had five out of the top six overall -- which included North Penn.

Individually, the top four place-winners were from District 1. Eight out of the top 12 were from the field as well.

The talent pool is obvious.

"She's really kept moving up, which is good to see because you like to see your seniors move up," Crawford said. "It doesn't always happen in girls' cross country. In  her case, she's worked her way along and she deserves it. She had a gutsy effort at the end."

So that's one reason why her finishes never went unnoticed.

"I think she's a really good competitor," Crawford said. "She's a nice person, but when something is on the line, she can really step up. She did it last year. You get here in states and there's a lot of good girls. She's a competitor and she focuses on what she can do."

McGovern will continue to run at William & Mary College, where former state champion Jess Cygan, out of Liberty, also runs as a freshman in 2011.

Big things could be in line for McGovern.

But first she needs to celebrate.

"I'm so excited, it's like a dream come true for me to win," she said.

Non one expected North Penn to take AAA boys. But they did. They practiced for it.

HERSHEY -- Mike Werner talked about his team's need for the "the perfect race" many times during the 2011 cross country season.

In fact, the North Penn boys' coach has been eyeing up that standard since he first became the Knights head coach in 2009.

On Saturday at the PIAA Class AAA boys' championships at Parkview, the Knights finally came through, setting in motion their coaches plans in thrilling fashion. 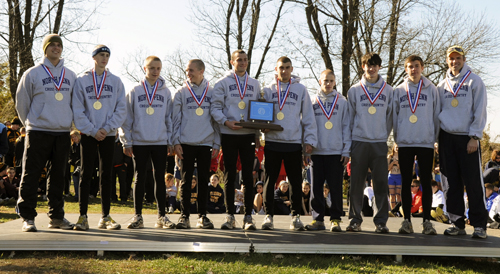 The Knights scored 132 points, tying PA#1 Cardinal O'Hara, but they displaced their rivals and claimed their third state title in five years. The team secured a closing spread of 46 seconds, the Knight's second best mark all season.

There were several steps that needed to be taken before the Knights were ready.

Despite playing third fiddle to West Chester Henderson and Cardinal O'Hara all season, North Penn first had to believe.

"This journey started last year," Werner said. "When we came together last year at the end of October, we were young. We thought it was so important to get here last year and to get that experience if we were going to do something this year."

"The way last week went," Werner added, "the guys really believed in themselves."

North Penn finished third at the District 1 meet at Lehigh, just behind West Chester Henderson (89) and Great Valley (148), but it was important to note that Lehigh was a different course than Hershey.

It was flat versus hilly. It was fast versus stubborn.

The team compiled its best spread of the season, finishing their top runner and their fifth harrier just 43 seconds apart, but they did so on an easy course.

Werner knew his team's training would play a pivotal role at Hershey.

It was the key ingredient in their state title win.

"We've done so many more hill workouts this year because we knew we would be at states," junior Jack Macauley said. "Every Saturday morning, waking up at 6:30 to go to travel to Fort Washington or Peace Valley, wherever we were going every Saturday morning when we didn't have a race. It was kind of grueling, but it paid off."

One of the most telling moves Werner made all season was his decision to skip the Carlisle Invitational in favor of a Saturday morning hill workout.

It was just a normal training session, a series of hill repeats.

But in the eyes of many runners, it made the difference.

"We trusted our coaching," Trimble said. "He knew exactly what we were doing. He kept us out of some meets to go and train on hills. We knew it would pay off. We were never concerned with the rankings. We were confident in ourselves and we knew it was all we needed."

The third variable was pack running. Closing the gap. It's the key strategy for any legitimate contender.

In order to hammer down the thinking, Werner would drill his runners after dual meets. If the final gap wasn't close enough, he'd subject his team to 1,000-meter workouts immediately following.

"The way O'Hara runs, they knew how to run great," Werner said. "They do it with good packrunners. We needed to get these guys to believe that they could run as a pack. And we did."

Once the team reached Hershey on Saturday, they had to put it all together.

"Going into the season our goal was to win the state and we had setbacks along the way, but we still knew in the back of our minds that we had a shot," Werner said. "And we had to run the perfect race. When you're an underdog, you know you're not going to run away."